The Biggest Catholic Stories of the 2010’s

The Biggest Catholic Stories of the 2010’s 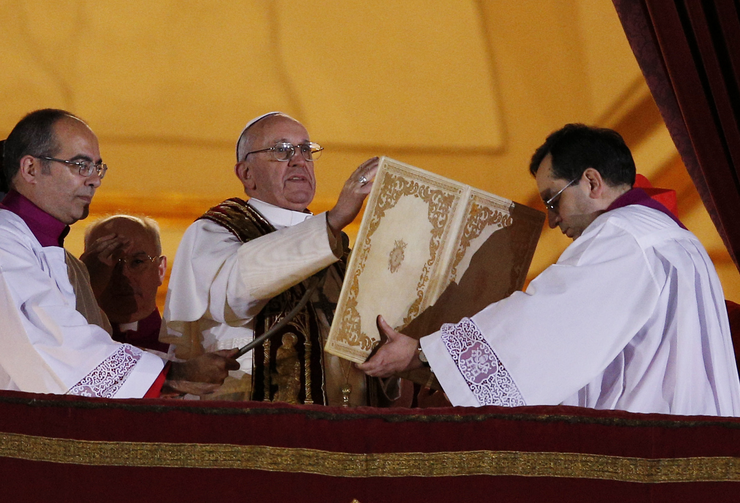 Pope Francis I delivers his first blessing from the central balcony of St. Peter's Basilica at the Vatican on March 13, 2013. Cardinal Jorge Mario Bergoglio of Argentina was elected the 266th Roman Catholic pontiff. (CNS photo/Paul Haring)

Looking back on the top stories of the decade is mostly science—this ranking, at least, is based on the most viewed pages of America’s website as measured by Google Analytics—but some art is involved as well.

Naturally older stories might perform better in straight statistical reports; they have simply been around longer. Our website has also been through several redesigns in the last decade, making it a bit more difficult to properly measure traffic on the earliest stories of the decade. America’s growing online readership also means that stories later in the decade had a head start with a larger audience.

Some of our most-read articles of the decade may speak to the era’s important issues without explicitly covering them, but they act as internet evocations of bigger stories and issues confronting the church and the world. And some stories included here may be important for any number of reasons that were at the same time not dramatic enough to generate internet eyeballs.

So with apologies to actual statisticians everywhere, here are the top 10 America Media stories of the decade past:

1.) The interview (and the unprecedented resignation that preceded it)
A Big Heart Open to God: An interview with Pope Francis
What more can be said about the interview that essentially introduced Pope Francis to the world? It has been by a large margin the most-read article posted on the website over the last 10 years with 1.25 million pageviews.

Those of us lucky enough to have proofread it before its publication spent a week walking around New York, slack-jawed heralds on extreme lockdown, but even we underestimated the cultural detonation this magazine-length interview would produce.

2.) The sex abuse and coverup scandal returned ...
More than a decade after the U.S. bishops’ Dallas Charter created new systems for responding to the sexual assault of children by U.S. priests, Catholics were shocked anew by the sexual abuse scandal after the crisis was again brought into cultural focus in the aftermath of a series of grand jury reports and investigations.

Deliver us: Will the Catholic Church's sex abuse crisis ever end? Host Maggi Van Dorn is a Catholic committed to healing the church from the inside. She wants to know: How did this happen? And what, if anything, can we do to help?

3.) … and finally reached into the highest levels of the church
The #MeToo phenomenon and explosive revelations about the behavior and alleged special treatment of former cardinal Theodore McCarrick brought new scrutiny to the abuse of seminarians and other vulnerable adults by members of the church hierarchy.

McCarrick kept a robust public presence during years he was allegedly sanctioned
The Editors: The Catholic Church should not be shocked by the McCarrick case—it should be ashamed.
Explainer: Former Cardinal McCarrick faces laicization. What does that mean?
Albany priest describes culture of harassment under McCarrick
Cardinal Pell, top advisor to Pope Francis, found guilty of ‘historical sexual offenses’

4.) A papal encyclical and an exhortation made news in the church and the world
“Laudato Si’” has had an impact far beyond the Catholic Church. Touching on themes of overconsumption, care for creation and global economic and ecological justice, the encyclical was discussed and cited by commentators far beyond the church’s normal cultural confines.

The Great Gift of ‘Laudato Si’’
Top ten takeaways from ‘Laudato si’
‘Laudato Si’’ calls us to ecological conversion. What does that look like?

A footnote on pastoral care for people in “irregular unions” received the most attention, but the exhortation “Amoris Laetitia” touched on much more about the challenges confronting contemporary family life.

5.) An ecclesial pushback began against Francis
Viganò’s accusations: What we know and what questions they raise
Why do some Catholics oppose Pope Francis?
Pope Francis to journalist: ‘I am honored that the Americans attack me.’
Cardinal Burke: It is ‘licit’ to call for the resignation of Pope Francis

6.) Political populism and radical right on the rise
What is the Catholic response to the rise of nationalism?
Days before the U.S. election, Pope Francis warns against the politics of fear
Pope Francis to activists: Stand with migrants, do not deny climate science, there is no such thing as ‘Islamic terrorism’
I’m unapologetically pro-life, and I’m ashamed that Trump spoke at the March for Life
Steve Bannon’s dubious crusade

7.) Pastoral outreach to the L.G.B.T. community remained a vexing challenge
One of the most viewed pages of the decade comments on an issue that has roiled the church in recent years and promises to continue to do so in the future—pastoral outreach and inclusion of L.G.B.T. people.

What is the official church teaching on homosexuality? Responding to a commonly asked question
I came out as a gay, Catholic priest on the Feast of the Annunciation
Archdiocese pulls ‘Catholic’ label from Jesuit school for refusing to fire teacher in same-sex marriage

8.) Pope Francis and the church defended migrating people around the world
People were on the move fleeing poverty and conflict around the world in numbers not seen since the end of World War II. Their plight became fodder for a rise of right-wing political sentiment across the developed world, but the global church and the U.S. bishops consistently defended the rights of migrants, demanding merciful treatment, dignity and opportunity for people crossing borders whether they were migrants from Central America, refugees from the Middle East or people escaping suffering of all sorts in Sub-saharan Africa.

Were Jesus, Mary and Joseph refugees? Yes.
Why shouldn’t people be deported if they’re ‘illegal’?
Catholic leaders denounce Sessions’s asylum decision: ‘We have truly lost our moral compass.’
What we owe refugees fleeing persecution around the globe
There were 69 million refugees last year. What is being done to help them?

9.) Millennials come of cultural age
Ok, boomer, your time in the cultural spotlight may finally have passed. Millennials seem to be blamed for the demise of everything from shopping malls and landlines to table manners and mayonnaise. Now that they have all grown up, will they be able to claim any credit for saving the church in an era of rapidly changing demographics?

Yes, millennials like brunch. But that’s not why they’re skipping Mass.
Can the Catholic Church keep millennials from passing it by?
What can nuns and ‘nones’ learn from one another?

10.) Christian persecution on the rise globally, acute in Middle East, as War on Terror unravels
Can Christianity survive in northern Iraq?
Religious freedom around the world under siege; Christian persecution is especially acute
‘Sing Hallelujah to the Lord’ becomes the unofficial anthem in Hong Kong

Other contenders for biggest stories of the decade:

The church confronts climate change
Deriving from the universal attention devoted to “Laudato Si’” and more obviously from a series of unprecedented natural disasters, as in secular media, a great deal of digital space at America was taken up by reporting or reflecting on the menace of climate change.

Papal plane rides
Those papal press conferences on plane rides back to Rome kept our on-call editors up at night and just about never failed to create a story.

Pope on Gays: "Who Am I to Judge?"
The Pope of Mistake(s)
Pope responding to questions on Trump: ‘A person who only thinks of building walls, and not building bridges, is not Christian.’
Pope Francis on plane: ‘I am not afraid of schisms. I pray they do not happen.’

The Synod on the Pan-Amazon made global news
Top 5 takeaways from the Amazon synod
The working document for the Amazon Synod has been controversial—just not in Brazil
As the Amazon Synod nears the end, a Brazilian bishop makes the case for women deacons

The role of women in the church
Vatican announces commission on women deacons
Pope Francis appoints two laywomen to key positions in Roman Curia
Women in the Life of the Church: A special issue of 'America'
With a church in crisis, why do Catholic women stay?
Proud to be Catholic? A groundbreaking America survey asks women about their lives in the church
We asked Catholic women if they supported the possibility of women deacons. Here is what they said.

Euthanasia and abortion
The Feminist Case Against Abortion: the pro-life roots of the women’s movement
What some pro-lifers have overlooked in the case of Charlie Gard
Patricia Heaton: ‘Iceland isn’t eliminating Down syndrome—they are just killing everyone who has it.’
Alfie’s last days: a little boy’s life and death stoked a furious debate that will not soon end
Pro-life Millennials Speak Out

Catholics in political life
Brett Kavanaugh and toxic masculinity: lessons from another all-male Jesuit high school
The Editors: It is time for the Kavanaugh nomination to be withdrawn
Vice President Biden on Pope Francis, Faith and Public Life

Gun violence and gun control in the United States
An editorial that seemed shocking at the time has become a rallying cry among many advocates for stronger gun control as the death toll ticks higher and domestic gun massacres continue.

Repeal the Second Amendment
We should not raze Sandy Hook from our conscience. We have not earned that mercy.

Stories we just can’t stop ourselves from revisiting:
‘Is my dad in heaven,’ little boy asks pope
The Catholic high school that holds funerals for homeless veterans
“Here I Am, Lord”: The little-known story behind a Catholic hit
A Cajun Eucharistic boat procession on the bayou
Meet my dad: The Republican who's hosting Muslim refugees