Archbishop Coleridge: The church is now facing its own #MeToo moment 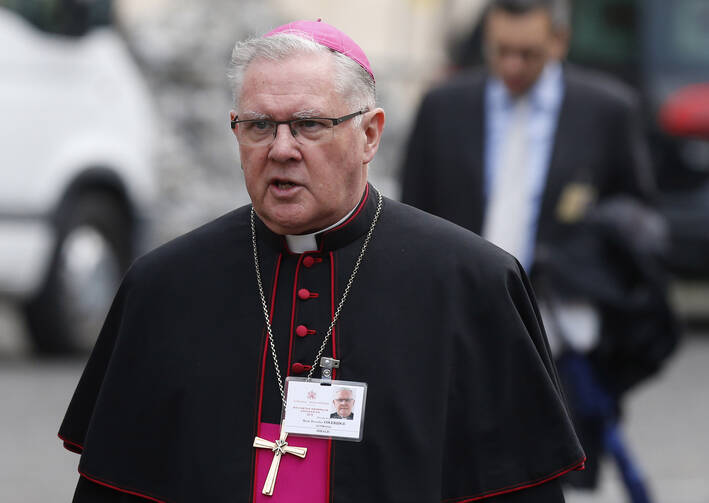 Archbishop Mark Coleridge of Brisbane, Australia, arrives for a session of the Synod of Bishops on the family at the Vatican Oct. 14. (CNS photo/Paul Haring)

ROME (CNS) -- In the wake of historic allegations of sexual abuse and cover-up in countries around the world, the Catholic Church is experiencing the same challenge that has brought a reckoning to those who used their authority to abuse or silence victims, said an Australian archbishop.

Allegations such as those raised against Cardinal Theodore E. McCarrick, retired archbishop of Washington, represent a "major shift" within the culture of the church, Archbishop Mark Coleridge of Brisbane said June 21. Abuse survivors are "willing to speak and they are believed," and the church has new processes of investigation, he added.

"It's not unrelated to the #MeToo phenomenon; there's something going on in the culture. And one of the elements of that cultural shift is that people are prepared to speak up in a way that they would never have done before," he told journalists following a four-day conference in Rome on safeguarding and child protection.

The Anglophone Safeguarding Conference, held at Rome's Pontifical Gregorian University June 18-21, reflected on the theme, "Culture, an enabler or barrier to safeguarding."

Among the speakers at the conference was Jesuit Father Hans Zollner, head of the Pontifical Gregorian University's Center for Child Protection, and Bishop Gilles Cote of Daru-Kiunga, Papua New Guinea.

While local cultures can influence how the church in a particular area handles abuse cases, there are aspects of church culture that have hindered progress in addressing allegations of sexual abuse, Archbishop Coleridge told Catholic News Service June 21.

"One word that's used to describe a large and complex phenomenon within the culture is clericalism. In other words, authority geared to power and not to service," he said. "In many ways, what happened in the Catholic Church was that our strengths became our weaknesses."

An example of those strengths was that closeness that Catholic clergy and religious shared with families. However, he said, it was precisely that which, "in certain situations, gave them access to the children who were abused."

Nevertheless, Archbishop Coleridge said that just as strength can become a weakness, a weakness can also become a strength.

"In many ways, what happened in the Catholic Church was that our strengths became our weaknesses."

"I believe that the agony we are passing through this time in fact is a purification of the church that has already made us stronger. It's kind of a searing grace that we never saw coming, and we certainly wouldn't have chosen. But somehow, God is in the midst of it all, purifying the church and calling us to what we are intended be," Archbishop Coleridge told CNS.

Following the conference's conclusion, Father Zollner told journalists that allegations such as those raised against Cardinal McCarrick are signs that now "things are tightening up and that the thoroughness of the approach reaches now even the highest levels."

Cardinal McCarrick, retired archbishop of Washington, said June 20 that he would no longer exercise any public ministry "in obedience" to the Vatican after an allegation he abused a teenager 47 years ago was found credible.

"A few years ago, we probably wouldn't have so easily (seen) that headline," Father Zollner said in reference to news about Cardinal McCarrick. "The church -- step-by-step, too slow but more and more consistently -- comes up with or lives up to what the norms are."

Archbishop Coleridge agreed with Father Zollner, adding that "what's happening with Cardinal McCarrick focuses on episcopal accountability" and that while progress has been made, "we have more to do."

As president of the Australian bishops' conference, Archbishop Coleridge stressed that although collaboration with local authorities is critical in confronting abuse and cover-ups, measures that compromise religious freedom and the rights of conscience are not the answer.

Laws requiring Catholic priests to break the seal of confession in some cases passed the Australian Capital Territory's Legislative Assembly in Canberra June 7.

The proposal, he said, "is poor public policy" that will not make children safer and amounts to a "renegotiation of the relationship between church and state."

Cardinal McCarrick said that he would no longer exercise any public ministry "in obedience" to the Vatican.

"In other words, it's almost being said implicitly. 'For a long time, you tried to tell us what to do. Now, because of what's happened, we will tell you what to do.' So, it's a kind of a public humiliation of the church but it is one that we have brought upon ourselves. So self-pity doesn't take us very far," Archbishop Coleridge said.

While we discriminate against women in our church, the abuse will continue. Sexism has been directly linked to child abuse and our church is well aware of it. In our church's abuse cases many of these priests sought out widows, mentally ill women, and recently divorced women and targeted their children. Women meant nothing more to them than things to get at their children through.

Sexism, especially in religion, has been found to be the most harmful variety as it teaches women that God believes them less important, less intelligent and even less sacred as human beings. No amount of false nonsense "equals can have different roles" makes up for the truth that when roles are pushed on different groups of people, and only restricting one group, that this different roles ruling equals different and lesser treatment of the restricted group and is in fact and truth oppression in a poor disguise.

Time to stop the hate in our church towards women and ordain women to priesthood immediately and make them bishops and cardinals as well since there is nothing holding us back from doing so since this current ban does not qualify under church law as an ex cathedra or unchangeable doctrine or dogma because it does not now have and always has lacked the grounds to become so.

Sexism has been proven, ALREADY AND ON A GLOBAL SCALE, to cause poverty, child abuse, violence, rape, forced marriage, forced polygamy, murder, disease, terrorism and even war. It is high time We Catholics proved to the world we are what we preach, namely, Christians who understand it is heinously wrong and sinful to treat one group of people differently and less than another based solely on their bodies. Jesus commanded we do not ever do this. Shame on us for allowing it for so long.

why don't guys like Coleridge and his buddies read the papers, read the national public inquiries that have very thoughtfully and carefully examined the evidence, and then rendered judgement that RCC is a criminal organisation that needs to be put out of business. Listening to these guys quoted here is like listening in on a Mafia dinner, with lots of back slapping and self-congratulation, and "let's watch how we run the rackets from now on, guys, the citizens are getting antsy......."