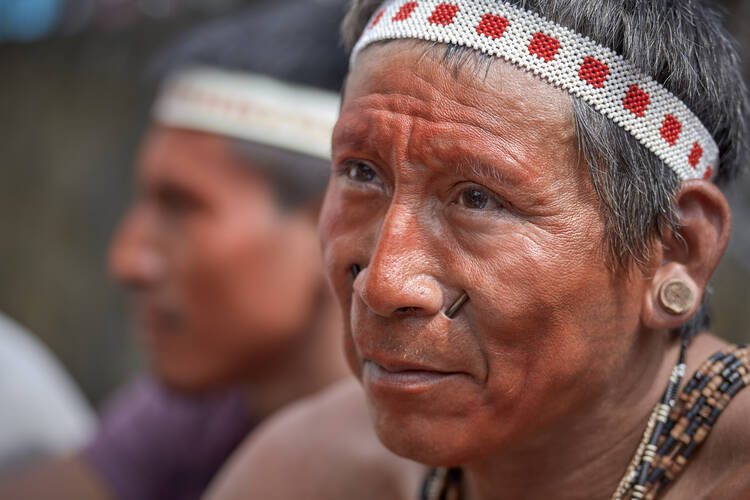 His face painted red with urucum, a man participates in a march by indigenous people through the streets of Atalaia do Norte in Brazil's Amazon region on March 27, 2019. Indigenous were protesting a central government plan to turn control of health care over to municipalities, in effect destroying a federal program of indigenous health care. (CNS photo/Paul Jeffrey)

Since its release in June, the instrumentum laboris or working document for the Synod of Bishops for the Pan-Amazon Region has provoked fierce criticism from some segments of the Catholic Church, with responses from influential cardinals and petitions against it circulating on the internet. But in Brazil, where most of the Amazon rainforest is located, there was little controversy about the aims and ambitions of the working document, “Amazonia: New paths for the church and for an integral ecology.” The reasons for that can be found in history, culture and language, say local theologians.

German Cardinals Walter Brandmüeller and Gerhard Müeller, the prefect of the Congregation for the Doctrine of the Faith until 2017, both presented extended critiques of the working document.

Cardinal Brandmüeller objected to the terminology of parts of the document, particularly formulations like “Mother Earth” and “the cry of the earth and of the poor.” In his opinion, such choice of words reflects an anti-rational reproach of the Western culture, leading to a “pantheistic idolatry of nature.”

The cardinal also raised questions about the “real intentions” of the organizers of the synod, saying that they hope to abolish priestly celibacy and to allow the ordination of women ministers.

In fact, in a brief section about the challenges of the church in relation to the vast territorial distances in the Amazon, the document suggests the possibility of ordaining married men—especially indigenous men—and a study on “the type of official ministry that can be conferred to women,” who play a central role in the Amazonian church.

But for the Pan-Amazon Synod’s organizers and sympathizers, much of the unhappiness with “New Paths” simply reflects the critics’ Eurocentricism. Many, the Rev. Dario Bossi said, “have little knowledge of the Amazon and in some cases have no commitment to its people.” Though an Italian, Father Bossi has been working in the Amazon region for 10 years and advises the Pan-Amazon Ecclesial Network. He participated in the preparatory meetings for the synod.

But the Pan-Amazon Synod’s organizers say much of the unhappiness with the its working document simply reflects Eurocentricism. Many critics “have little knowledge of the Amazon and in some cases have no commitment to its people.”

Another Italian, Bishop Adriano Ciocca Vasino of São Félix do Araguaia, in the State of Mato Grosso, follows the same argument. “Many people have a Eurocentric ecclesiological view and have difficulty distinguishing the evangelical message from its cultural expression,” he said.

Cardinal Pedro Barreto Jimeno, the archbishop of Huancayo in south-central Peru, stepped forward to defend the working document of the synod in an article published by La Civiltà Cattolica in July as “an expression of the voice of the people of God.” Cardinal Barreto noted that some 87,000 people of the region were consulted over two years in preparation for the synod, an “unprecedented experience” that in the end “gives a good account of what is happening in this region” and “largely expresses the feelings and desires of many representatives of the Amazon people.”

The elaboration of the working document began in June 2018 with a stage of “community listening,” which provided a foundation for the theological reflection to take place at the synod. To a great extent, the text is grounded in an anti-colonialist perspective and emphasizes that the church needs to assume a radical intercultural dialogue with the peoples of the region.

In the first part, the document presents issues concerning the Amazon territory and its peoples, highlighting the visions shared by the communities that have been consulted and speculating on them in historical and theological terms. The second section deals with pastoral and ecological questions, with a broad discussion of the threats to life, culture and spirituality in the region and suggestions to resist to them. The final segment reflects on ecclesiological challenges, such as the problems of evangelization in communities in the forest and cities and the building of a church with an “Amazonian face.”

In reaction to the text, some proposed conspiracy theories involving communists infiltrating the church; others sought to engage in genuine theological debate. “If some people fear the instrumentalization of the synod by the political left wing, we can also say that there’s a clear instrumentalization of the polemics by sectors of the right wing,” said Francisco Borba Ribeiro Neto, the coordinator of the Center of Faith and Culture of the Pontifical Catholic University in São Paulo.

This seems to be the case in the challenge issued by the Institute Plinio Corrêa de Oliveira, which launched an international campaign against the synod. The I.P.C.O. is an outgrowth of the Society for the Defense of Tradition, Family and Property, a Brazilian Catholic organization with historical connections with big farmers and a record of anti-environmentalist activism that has become connected politically with the far-right in Brazil.

The document’s mostly European critics seem to struggle with the idea that Latin America as a region could produce theological insight, according to the theologian Mário Betiato, a retired professor at the Pontifical Catholic University of Paraná. For example, in a seven-page response to the working paper released in July, Cardinal Mueller reproved many of its formulations, especially one that says that the “Amazon—or another indigenous or communal territory”—can be seen as “a theological place where faith is lived, and also a particular source of God’s revelation.” In his critique, Cardinal Mueller affirms that “Holy Scripture and tradition are the only sources of revelation.”

“The document is full of poetic licenses linked to a Latin American way of expression. It’s not a coincidence that many critics are Germans and Anglo-Saxons.”

In another part of his commentary, he criticized a suggestion that the formation of missionaries should include “indigenous theology and ecotheology.” For Cardinal Müeller, theology is “the understanding of God’s revelation in His Word and in the faith-profession of the church,” not the “continuously new mixture of world feelings and world views.”

In the same sense, the inculturation of liturgy with Amazonian cultural elements must not change the Catholic sacramental signs, Cardinal Müeller argued, according to a Catholic News Agency report. In his review of the working document, he said it expresses an “ambiguous approach with a vague religiosity and the futile attempt to turn Christianity into a science of salvation by sacralizing the cosmos and the biodiverse nature and ecology.”

A great part of the discord is a matter of style, according to Mr. Borba. “The document is full of poetic licenses linked to a Latin American way of expression. It’s not a coincidence that many critics are Germans and Anglo-Saxons,” he said. For a Latin American reader, for instance, the use of an expression as “Mother Earth” is not a reference to the esoteric Gaia—and nobody would see it as a pantheistic element in a church document.

“The European tradition itself has a great example of this kind of language in Saint Francis’ Canticle of the Creatures, in which he talks of ‘Mother Earth’ and ‘Brother Sun,’” Mr. Borba said.

This communication gap between theologians in Latin America and in Europe revives, according to Mr. Borba, the challenge of inculturation of Catholicism in the New World since colonial times. “It always demanded a great dose of creativity from the missionaries, and it always produced tensions with the European headquarters—sometimes because the context was unknown, sometimes because they really crossed the line.” But from this tension emerged important solutions for the concrete problems of evangelization in the Americas, he said.

“The Catholic world has been consuming European theology for centuries,” said Mr. Betiato. “Since the Medellín Conference [of the Latin American Episcopate in 1968], this reality is changing.”

For the Rev. Paulo Suess, an advisor during the preparatory work and the writing of the working document, the concrete problems in the Amazon are huge. “That territory is characterized by its gigantic distances,” he said. “In many communities, not more than one Eucharist is celebrated throughout the year. People prefer to count on the evangelical pastor who is at hand than to wait for the priest who only comes during a few holidays,” Father Suess said, explaining why the idea of ordaining the viri probati—community elders with roots in the region and exemplary life—has emerged.

And the document’s environmental emphasis, Mr. Betiato said, is understandable since it is connected to perhaps the greatest problem facing the world today—climate change. Although the text has what Mr. Borba called “a few problematic enthusiastic hyperboles,” its authors made a genuine effort to integrate “the ecological vision to the theological discourse,” as defined by Bishop Ciocca Vasino. “Not as an appendix,” he said, “but in the very center of the reflection, following the lead of the [Pope Francis’] encyclical ‘Laudato Si’.”

This new conception of the Church’s evangelizing action is thus reduced to a mere exercise in inter-religious dialogue.
Fr. Corrado Dalmonego brags about an astonishing fact that any traditional missionary would consider a most bitter failure.
He celebrates the fact that he is the director of “a mission of presence and dialogue,” in which no one has been baptized for 53 years!
https://www.tfp.org/a-mission-that-baptized-no-one-in-fifty-three-years-the-flawed-evangelization-model-of-the-pan-amazonian-synod/

Looks like the people of the Amazon will be much better off if left to the preaching of the good news by Evangelicals and Pentecostals.

Oh, yeah--as Bolsanaro burns their homeland down! Such a "corporal work of mercy"!

I wonder if this Synod on the Amazon will discuss and perhaps recommend ordaining married men to the priesthood in light of the unique territorial distances that prevent evangelization to grow and Mass and Holy Communion to be practiced even on Holy Days. I think most traditionalists are concerned this would lead to other reasons why married men could be ordained as priests. After all, many Episcopal married priests were welcomed into the Catholic Church and I heard of any substantiated criticism about their effectiveness as pastors.

1
Spanish priest: ‘Amoris Laetitia’ allows the church to ‘untie the knots’ in Catholic morality since ‘Humanae Vitae’
Gerard O’Connell
2
How America Sold Out Little League Baseball
John W. Miller
3
The only Trappist brewery in the U.S. is closing (and IPAs are to blame)
John W. Miller
4
Review: The ‘Downton Abbey’ characters already got happy endings. So why do they need a new film?
Jim McDermott
5
Cardinal Cupich: The Second Amendment did not come down from Sinai
Blase J. Cupich