We should not raze Sandy Hook from our conscience. We have not earned that mercy. 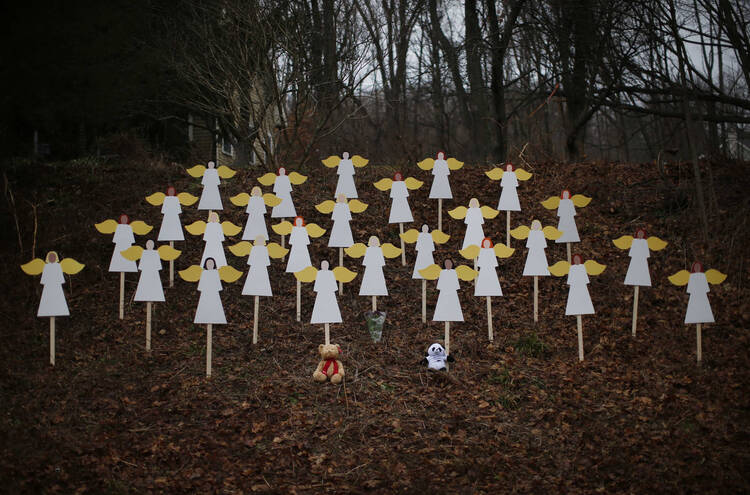 The Sandy Hook Elementary School in Newtown, Conn., is scheduled to be completely demolished by Dec. 14, the first anniversary of the massacre that took place within its walls. A place where such unspeakable violence occurred and so much suffering was inflicted is being removed from view because it is too heartbreaking to look at.

One year later, the people of Newtown and the families who lost loved ones at Sandy Hook are trying to move on. But the nation should not raze Sandy Hook from its conscience. We have not earned that mercy.

Sandy Hook should not have happened. Those 20 children and six teachers and administrators should not have died. They died because a disturbed young man got his hands on some dangerous weapons and because inaction and indifference helped put them within his reach. After a series of mass shooting events in recent years, no one should have been surprised by Sandy Hook, just as no one should be surprised by the 16 mass shooting incidents (shootings with at least four dead victims) that have followed Sandy Hook this year. And, sad to say, no one should be surprised by the next Sandy Hook. Newtown’s first and second graders became new statistics in U.S. gun violence because U.S. politicians consistently refuse to legislate common sense gun control measures, and U.S. voters let them get away with it.

If the murder of 20 schoolchildren is not enough, it is indeed hard to imagine what degree of carnage might finally challenge America’s gun idolatry. As in past shooting events, after the initial national gasp of despair, Second Amendment absolutists simply waited out public outrage in well-founded confidence that the Sandy Hook threat to gun rights would eventually dissipate. It has.

What has changed since Sandy Hook? The nation’s school districts have been busy attempting to shore up security, allocating $5 billion this year, not on new learning technologies or textbooks, but on such oddities as bulletproof whiteboards and new barricade and intruder-alert systems. Some have even trained and armed teachers and staff, and campus invasion safety drills have become commonplace.

The National Rifle Association had a good year, breaking records in fund-raising, and, in a small nod to simple decency, a coalition of gun-rights groups agreed to change the date for their proposed celebration of gun ownership, “Guns Save Lives Day,” from the Dec. 14 anniversary to the day after.

In April, modest gun control legislation that would have expanded background checks for gun buyers failed to make it through the U.S. Senate. Some state legislatures, notably in gun-traumatized Connecticut and Colorado, managed to put new limits on gun ownership, and advocates for gun control have been able to turn back legislation in other states that would have expanded gun rights. It is a painful irony, however, that in the aftermath of Sandy Hook, gun-rights supporters have also had notable successes in broadening gun ownership and the ability to carry concealed weapons. Federal gun law nullification measures that make it a crime for federal agents to enforce U.S. gun laws passed in Missouri and Kansas.

A couple of months after Sandy Hook, this publication advocated a constitutional change to put an end to the interminable debate about the meaning of “well regulated” in the Bill of Rights (“Repeal the Second Amendment,” Editorial, 2/25). Our current appeal is simply to common sense. As the victims of gun violence pile up—about 90 die each day—a minority of Americans hold the nation hostage to an absolutist interpretation of the Second Amendment. Who but a handful of citizens wish to live in the current gun dystopia? Some continue to insist, against all empirical evidence, that the answer to gun violence is to put even more guns in circulation. Such ideology over evidence cannot be allowed to dictate public policy.

A recent survey by Johns Hopkins University confirms that 89 percent of Americans support universal background checks and that significant majorities support bans on assault weapons and the high-capacity magazines that serve them. Why does such legislation time and again stall in Congress?

David Wheeler lost his 6-year-old son, Ben, in the terror that consumed Sandy Hook. As an advocate for common sense gun regulation, he has learned since that day “how completely disconnected our legislative system seems to be from the opinions of the American people.” In an interview on ABC’s “Good Morning America,” he explained that he remains determined, nonetheless, to someday bring Congress to its senses.

“I will do whatever it takes,” Mr. Wheeler said, “to keep another father from having to go down this road of loss and despair and grief.” It is time for those in the majority who have remained silent on this issue to join him in that commitment.

Two days ago, an Afghan child was killed by the US Army ...(collateral murder). I think he had also a father and a mother. This was surely painful for them.

Ray Scheel
8 years 1 month ago
"They fought a foreign, colonizing government, not their own." This is revisionist history. There is no doubt or argument that Great Britain was the established and founding government of the 13 colonies. They were common men - workers, business owners, farmers - who fought their own government with their own weapons and no special training or qualifications to join in. To claim anything else is disingenuous.
Jerry Guzi
8 years 1 month ago
I agree with much of this comment. Much went into our American Revolution. Part of the effort was our volunteer militia. I agree, and admire them. I would change one phrase about our militia's role. “They were common men - workers, business owners, farmers - who fought The British Government with their own weapons and no special training or qualifications to join in.” Examples of those who fought our own American government were Benedict Arnold, Daniel Shay (Shays' Rebellion), and John Brown (Raid on Harpers Ferry). I agree there is need for citizen participation and vigilance, and that there is sometimes disingenuous, revisionist history.
Paul Stolz
8 years 1 month ago
why does it have to be one or the other? Why is the ineffective mental health system fails young people and society a red herring? You can call people stupid but why shut down the other half of the equation? Most Mentally Ill people are harmless and they need treatment but why aren't we allowed to talk about those people whose mental illness can make them a danger to themselves and society? Are we supposed to pretend that mentally ill people NEVER have delusions or hallucinations which may result in them killing other people? Why cant we focus more time on good mental health legislation? why cant we funnel more money and resources to the mental health system? Why is it labeling or stigmatizing to diagnose a child with mental illness? Would we ignore juvenile diabetes? Are we supposed to think that in a nation where there are over 100 million guns (and who knows how many on the black market) that an untreated mentally ill person with homicidal ideations or delusions is somehow not going to get a gun, or use a bomb (McVeigh) or use a knife or his bare hands? You want to argue 200+ years of the 2nd amendment? Enjoy. But I want to talk about creating a mental health system which erases the stigma, provides good adequate care, and can protect society when its necessary
Paul Stolz
8 years 1 month ago
Inexcusable Inaction. I foolishly thought that maybe rather than the same old tired gun control arguments that we have been getting for who knows how long that maybe, just maybe someone would start talking about the horrible ineffectiveness of our mental health system. Sandy Hook (along with all the others) should not have happened. They died not because Adam Lanza was "disturbed".... I often get disturbed at America Editorials but i have no intention of shooting people. They died because the Adam Lanza was a very mentally ill young man who either received no treatment or his treatment was ineffective. They died because everyone around him KNEW he was mentally ill but either ignored or minimized it. Look at the history of these mass shootings from Columbine to Sandy Hook and its the SAME scenario. Young Mentally Ill boys or men and in each case every around them simply ignores the signs OR the mental health system is powerless and ineffective. Just as the Gun right advocates are "yelling: about their constitutional rights you have too many so called "mental health advocates yelling about the right to privacy, and the fear of being stigmatized. Somehow law abiding gun owners should think about the common good (and yes they should) but those on the mental health side can simply thumb their noses at society. I wish the editors at America would stop the partisan politics when it comes to the issue of mass shootings. You take on gun owners because thats easy. Label them as evil and selfish and you are the darlings of the political left. Show some courage and start challenging the mental health system.