Take a deeper look at Pope Francis’ statement on marriage and the family. 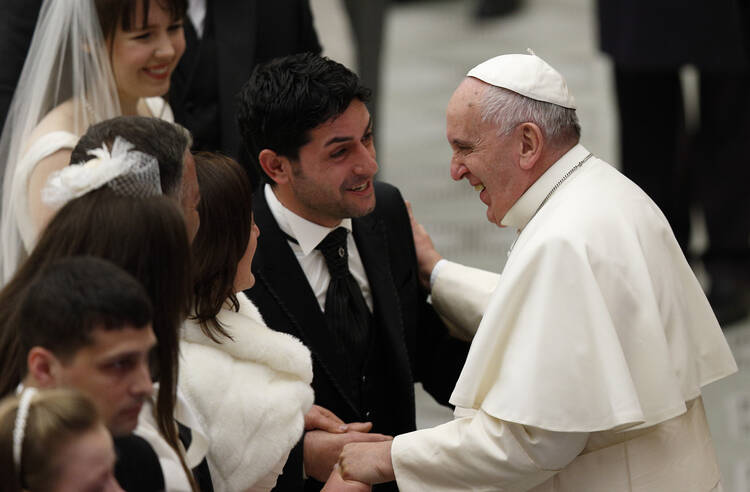 “The Joy of Love experienced by families is also the joy of the Church.” So opens Pope Francis’ long-awaited apostolic exhortation, “Amoris Laetitia” (“The Joy of Love”). The statement, subtitled "On Love in the Family," draws on the conclusions of the Synod of Bishops, which gathered over the course of two years to discuss challenges to the family.

“Amoris Laetitia” is above all a pastoral document, which the pope intends to serve as “an aid to reflection, dialogue and pastoral practice, and as a help and encouragement to families in their daily commitments and challenges.” We hope this round up of in-depth coverage and expert analysis will serve to deepen your own reflection and open a fruitful dialogue about the joys and trials of families today.

The Mystical Dimension of ‘Amoris Laetitia’
By Robert P. Imbelli
"Pope Francis is more the mystagogue than the moralist."

Pope Francis’ Exhortation on the Family an ‘Organic Development of Doctrine’
By Gerard O'Connell
“There is continuity in teaching here, but there is also something really new. There’s a real development [of doctrine], not a rupture,” said Cardinal Christoph Schönborn.

Reactions Roll In to Apostolic Exhortation from Pope Francis
By Kevin Clarke
The pope’s exhortation was greeted warmly by the U.S. Conference of Catholic Bishops this morning and challenged by some others.

Top Ten Takeaways from ‘Amoris Laetitia’
By James Martin, S.J.
Pope Francis’s groundbreaking new document asks the church to meet people where they are and to consider the complexities of people’s lives.

Francis, Family and Feminism: Changing the conversation around complementarity
By Megan K. McCabe
For many Catholics, discussions of gender and family can be painful.

In Good Conscience: What ‘Amoris Laetitia’ can teach us about responsible decision making
By James T. Bretzke
Pope Francis clearly believes there are few, if any, simple “recipes” for what following a formed and informed conscience looks like.

Look to the Margins: Violence against women as a threat to the family
By Meghan Clark
Questions of domestic violence do not just affect individual families but larger society.

Discernment: A Key to Understanding ‘Amoris Laetitia’
By James Martin, S.J.
For Jesuits like Pope Francis, "discernment" is not a generic phrase but one with a specific meaning.

A Joyful Vision of Christian Marriage
By Robert P. Imbelli
Let no commentary distract from this stupendous reality that Pope Francis celebrates.

The Listening Pope: Surprising sources of “Amoris Laetitia”
By Kevin Ahern
“Amoris Laetitia” departs from traditional papal teaching, which generally only referenced the Bible, magisterial documents and the teachings of saints. In dialogue with these doctrinal sources, Francis develops a pastoral theology of family life that explicitly draws from some surprising sources.

A Pastor to His People: For Francis, the ‘good of souls’ comes first.
By Drew Christiansen, S.J.
‘Salus populi’ is Francis’ refutation of canonists and moral theologians who put rules ahead of people in a mistaken view of pastoral care.

Pope Francis Opens Doors to the Integration into Church Life of Catholics in Irregular Situations
By Gerard O'Connell
He says the aim is to integrate, not exclude, these people who fall short of the Christian ideal. He uses three verbs to express how the church should assist them here: “accompany, discern and integrate.”
What Some Critics of ‘Amoris Laetitia’ Are Missing
By James Martin, S.J.
Why was Pope Francis’ emphasis on conscience so alarming to critics? Why would a traditional teaching alarm so-called traditionalists?
Podcast: What's Conscience Got to Do With It?
By The Editors
Prior to the release of "Amoris Laetitia," Pope Francis' groundbreaking new apostolic exhortation, in which the role of conscience was reaffirmed in moral decision making, Matt Malone, S.J., and Kerry Weber spoke with moral theologian James Keenan, S.J., for a primer on conscience issues.

Background on the Synod

October 2015 — Ordinary Synod of Bishops on the Family

October 2014 — Extraordinary Synod of Bishops on the Family