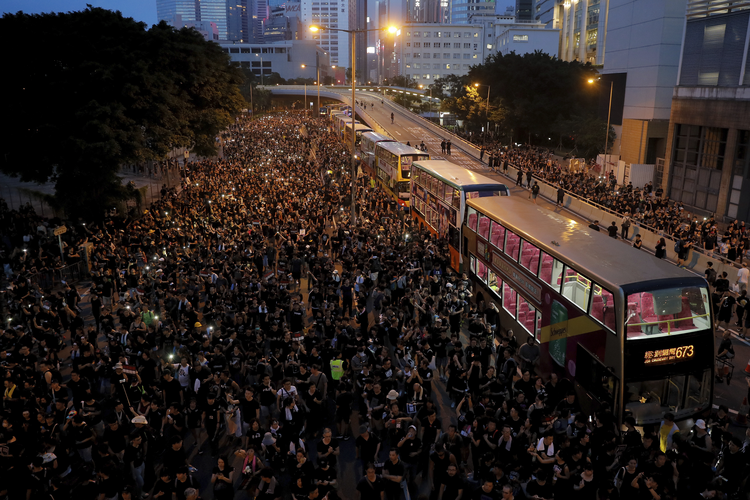 Protesters gather on a main road near the Legislative Council on June 16 as they continuing protest against the unpopular extradition bill in Hong Kong. (AP Photo/Kin Cheung)

Throughout last week’s mass protests over a controversial extradition law in Hong Kong, one prominent feature stood out: the almost continuous singing of the hymn “Sing Hallelujah to the Lord.”

The powerful singing broke out spontaneously during demonstration processions, in make-shift services on footbridges and impromptu prayer meetings before traffic roadblocks. It was sung during a gathering of protesters on the lush lawn all around the legislature building and, most prominently, during tense stand-offs between protesters and police.

Many Christians said they felt empowered by a pervasive sense of God while non-Christian demonstrators said they were also touched by a feeling of love and peace through the singing of the hymn. About 11 percent of Hong Kong’s residents are Christian; including 390,000 Catholics, representing about 5 percent of the population.

Hong Kong has been rocked by mass protests that began on June 9 when an estimated one million people marched to urge Hong Kong authorities to scrap an amendment to an extradition bill that would allow suspects to be sent for trial in China’s Communist Party-controlled judiciary. In China’s courts, the conviction rate is often as high as 99 percent.

A Catholic activist, who only identified himself as Joseph, said he believed there would have been more bloodshed during the mass protests if Catholic and Protestant clergy had not at times “acted as a barrier” between the riot police and angry young protesters, who joined in singing “Sing Hallelujah.”

Many Christians said they felt empowered by a pervasive sense of God while non-Christian demonstrators said they were also touched by a feeling of love and peace through the singing of the hymn.

A 24-year-old protester who identified himself as Tommy, a non-Christian, said he was very impressed by “the powerful beliefs and conviction of the Christians” who sang throughout the protests, even late at night, and believed their presence has protected them against a police crackdown.

The Hong Kong government has reassured people that political and religious offenses would not be included among those that could lead to extradition under the proposed law. But many in Hong Kong fear the amended law would see not only criminal fugitives but also government critics, journalists, Christians and anyone targeted by the Chinese government sent to China for trial.

The singing first started at a prayer meeting staged by a group of pastors and young Christians outside the government headquarters on the night of June 11, when protesters began to gather to call for the retraction of the bill the night before it was scheduled to be discussed in the legislature.

A pastor who helped organize the prayer meeting, the Rev. Wu Chi Wai, the general secretary of Hong Kong Church Renewal Movement, told America that the demonstrators were hoping that their singing and praying could defuse the tense atmosphere between protesters and police.

“We hoped to bring the presence of Christ there. We saw our roles as peacemakers placed between protesters and police to calm emotions," said Mr. Wu.

“Sing Hallelujah to the Lord” was sung so often in prayer meetings and outdoor services across the vast protest site in central Hong Kong over the past week that it became recognized as the mass protests’ unofficial theme song. After the first demonstration on June 9, the Hong Kong government insisted in a late night statement that it would resume the debate on the bill on June 12 as planned.

A group of young people, apparently angered by the news, rushed toward the legislature building then. They threw water bottles and metal barricades at police, who used batons and pepper spray on them. Anger at the government’s intransigence resulted in another gathering late at night on June 11, which turned into a mass rally that paralyzed the main thoroughfares outside the legislature building on the next morning when the debate on the bill resumed.

The protest was largely peaceful on June 12, until riot police armed with rifles and shields began to use rubber bullets, tear gas and bean-bag shots to disperse unarmed crowds in the afternoon, according to pastors and Christians who were at the scene.

More than 20 Protestant pastors held a press conference the day after the rally to condemn excessive force used by police on unarmed, peaceful protesters. They attested to the civility of the public-spirited protesters they were standing with, who helped each other by sharing snacks, face masks and medical supplies and who picked up rubbish after themselves. They condemned the riot police who went after protesters who did not attack or provoke them.

A retired pastor, Rev. Yuen Tin Yau, asked the press: “Who was the one who used violence? Who rioted? I believe it was the government who used its power to hurt the powerless Hong Kong people.”

Although Hong Kong’s leader Carrie Lam suspended efforts to pass the bill on June 15, authorities justified the use of force on civilians by saying the protests were a “riot”—a claim it stepped back on June 17. Outrage at the government’s dismissal of the protest as a riot together with its refusal to completely scrap the controversial bill, prompted ordinary Hong Kong people to join yet another protest on Sunday, June 16.

Like previous democracy protests, Christians who sang hymns were visibly present throughout the demonstration. At the end of the orderly, peaceful march that organizers said was attended by two million people, protesters gathered in the covered forecourt of the legislature building, where several Christian pastors and priests, including the Hong Kong Catholic Church’s Auxiliary Bishop Joseph Ha Chi-shing, took turns praying and singing hymns with hundreds of the mostly young crowd until 2 a.m. on Monday morning, June 17.

“We hoped to bring the presence of Christ there. We saw our roles as peacemakers placed between protesters and police to calm emotions."

“Our beliefs told us: where our sheep are [is] where the pastors should be,” Bishop Ha told the crowd.

“Although we face a huge challenge, we’re not afraid because we know where our strength comes from,” he said, attempting to encourage demonstrators who were tired from the third protest in a week and frustrated by the government’s unresponsiveness to their demands.

Bishop Ha reminded the faithful that the protesters were Christians first.

“Even though the government did many things that we don’t like and were very wrong, we cannot demonize them because this is [against the demands] of our faith,” he said.

Analysts believe the Christian presence, including the statements issued by various by clergymen and churches urging the government to retract the proposed extradition law, has changed the views of many non-believers in Hong Kong toward Christianity, which many previously believed was politically conservative and out of touch.

Professor Ying Fuk Tsang, the director of the divinity school at the Chinese University of Hong Kong, said Christians and churches in Hong Kong are normally not outspoken on political issues, but they are more visible in this movement because they have become aware that religious freedom would be under threat under the amended law.

Christians say they are aware that China had long used non-political crimes and even fire regulations to target Christian house churches and pastors.

Although the Christian involvement in recent protests is widely seen as having a positive influence, it is unclear how the participation of Hong Kong Christians is viewed by the Chinese government. China has long linked Christian churches and non-governmental organizations with foreign influence and are wary of any possibility of “color revolution” fomenting regime change.

Mr. Ying said the Chinese government is now likely to reassess its relationship with Hong Kong churches and Christian leaders. Beijing authorities may reinforce their liaisons with pro-Beijing Christian leaders while further alienating those who have been openly critical of the government.

But pastors who have spoken out say even though there might be repercussions, it was still important to speak the truth during the protests.

“This is out of the values of our beliefs,” said Mr. Wu. “And that’s human dignity and freedom.”

In his homily at a Mass on June 16, Cardinal Joseph Zen Ze-kiun, retired bishop of Hong Kong, thanked God that Hong Kong has so many people who care about justice. “Although we won this battle, we need to continue to use peace, love and justice to arouse society, and Christ will stand by us,” he said.

“Can You Hear the People Sing?” from Les Miz is also being sung by many of the Hong Kong protesters. Easy to locate online, the song sends chills down the spine.

I believe it is a bad thing to involve the church into politics. Communist is bad, people say. But when this system raises poor people's lives, hundreds of millions of those "Tabernacles that move" as defined by Pope Francis, will that be the Satan's move or God's move?
Just stay away from politics.

This article also appeared in print, under the headline “‘Sing Hallelujah’ becomes anthem of Hong Kong protests,” in the July 8, 2019, issue.