As the Amazon Synod nears the end, a Brazilian bishop makes the case for women deacons 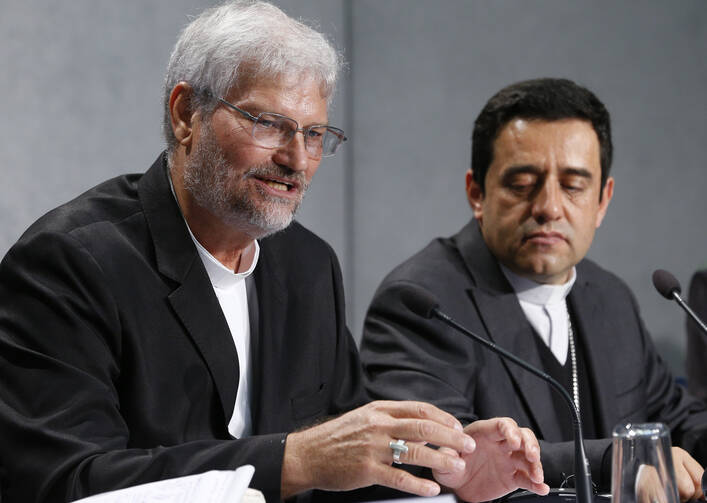 Bishop Evaristo Pascoal Spengler of Marajo, Brazil, speaks during a news conference after a session of the Synod of Bishops for the Amazon at the Vatican Oct. 25, 2019. Also pictured is Bishop Joaquin Pinzon Guiza of PuertoLeguizamo, Colombia. (CNS photo/Paul Haring)

On the eve of the highly anticipated voting on the final document of the Synod of Bishops for the Pan-Amazonian Region, Bishop Evaristo Pascoal Spengler, O.F.M., of Marajó, Brazil, chose to focus his remarks at the daily Vatican press briefing on Oct. 25 on the synod’s discernment of an “official ministry” for women.

Over the course of the three-week synod, a strong consensus has become clear among the synod participants concerning the urgent need to respond collectively to the climate crisis and to protect the Amazonian ecological territory and the rights of indigenous people.

Much less certain is what language the synod will adopt on the highly discussed topics of married priests and women deacons—and whether each paragraph will receive the necessary two-thirds support for passage.

The voting will take place in the final plenary of the synod on Oct. 26.

At the briefing, Bishop Spengler, 60, a native Brazilian, described the “decisive presence of women” in the history of salvation, as prophets, judges, the mother of God, saints, papal counselors and doctors of the church. And, he added, “St. Paul speaks of women deacons serving the community.”

“If we look to the Amazon today,” he continued, “over 60 percent of communities are coordinated and led by women.” Women are the majority of catechists, ministers of the Word and of the Eucharist, “so women have a decisive presence in the Amazon,” he said.

“If we look to the Amazon today over 60 percent of communities are coordinated and led by women.” Women are the majority of catechists, ministers of the Word and Eucharist, “so women have a decisive presence in the Amazon.”

Bishop Spengler then referred to the decision of the Second Vatican Council to restore the diaconate as a permanent vocation for married men, and he explained the reasoning for this decision, identified in the Vatican II decree “Ad Gentes”: Since “there are men who actually carry out the functions of the deacon’s office…. It is only right to strengthen them by the imposition of hands...that they may carry out their ministry more effectively because of the sacramental grace of the diaconate.”

“This topic is now being taken up again,” the bishop said.

This section of canon law, Pope Benedict wrote, makes clear “the difference between the episcopate, the presbyterate and the diaconate.” Benedict added a third paragraph to Canon 1009, which reads: “Those who are constituted in the order of the episcopate or the presbyterate receive the mission and capacity to act in the person of Christ the Head, whereas deacons are empowered to serve the People of God in the ministries of the liturgy, the word and charity.”

The day of the anticipated vote on the final document at the Amazon synod, Oct. 26, marks the 10th anniversary of the publication of “Omnium in mentem.”

In light of this amendment to canon law, Bishop Spengler told reporters at the Vatican briefing, “We realize there is a path that is open for the ordination of women.”

“We know that in the history of the church there are women deacons,” he said, adding that St. Paul writes, “There is neither Jew nor Greek…there is not male and female; for you are all one in Christ Jesus” (Gal 3:28).

After the bishop concluded his remarks, a journalist asked the bishop if the final document includes a proposal for the ordination of women as deacons, and whether a majority of the synod fathers support such a proposal.

Another journalist asked, considering the unity of the Sacrament of Holy Orders, how the bishop could reconcile his support for women deacons “with our Lord’s will for a male priesthood.”

Again referring to Pope Benedict’s amendment of canon law in 2009, the bishop said that from the perspective of canon law “there is already a path for the ordination of a woman as a deacon, not as a priest or a bishop.”

Inés Azucena Zambrano Jara, M.M.I., of Colombia, also fielded a question on the topic. A journalist asked the sister, who is an auditor at the synod, what difference it would make for women and their ministry in Amazonia if the pope approved a proposal for women deacons.

“This would confirm our identities, our baptismal nature,” she responded, adding that her congregation, the Missionary Sisters of Mary Immaculate and of St. Catherine of Siena, “walks together with indigenous people and has been doing so for 100 years.”

“We want to enhance indigenous women,” she said. “This is what we are fighting for.”

Earlier in the briefing, Sister Zambrano Jara said the participation of women in the Amazon synod was “very active.”

“We defined ourselves as ‘synodal mothers’ because this is what we felt,” she said. “We lived this synod with passion.”

More: Synod on the Amazon / Latin America / Women in the Church / Vatican

Strong on social justice and ecological conversion. Weak on overcoming ecclesiastical patriarchy. Why is the church afraid to let go of male headship? Is social/ecological justice possible under patriarchy?

When the "Official" Ministry came in through the FALSE Apostles somewhere in the first Century itself, the Spirit of Jesus the Lord took to flight.