Days before the U.S. election, Pope Francis warns against the politics of fear 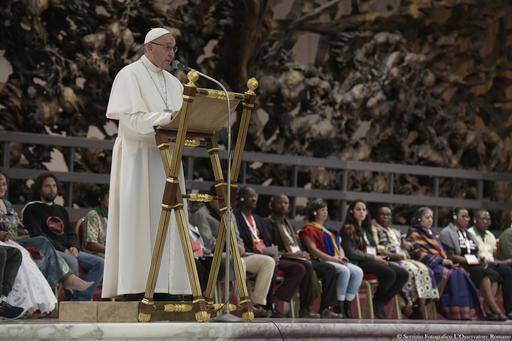 Pope Francis delivers his speech an audience with representatives of the popular movements at the Vatican Saturday, Nov. 5, 2016. (L'Osservatore Romano/Pool Photo via AP)

In a speech delivered at the Vatican just three days before the U.S. presidential election, Pope Francis urged social justice activists from around the world not to give into the politics of fear by building walls but instead work to build bridges.

“Because fear—as well as being a good deal for the merchants of arms and death—weakens and destabilizes us, destroys our psychological and spiritual defenses, numbs us to the suffering of others,” he said.

The pope did not mention the Nov. 8 U.S. election, but many of the themes he touched on have played out in debates between Donald J. Trump and Hillary Clinton in recent months.

For example, the pope reiterated his plea for nations to respond more generously to the global refugee crisis, which he blamed on “an unjust socio-economic system and wars.”

He pointed specifically to the hundreds of thousands of people who have died in the Mediterranean Sea seeking entry into Europe in recent years and, he said, “no one should be forced to flee their homeland.”

The United States accepted about 10,000 Syrian refugees this year fleeing a brutal civil war but not without controversy.

Several Democratic and Republican governors said last year that the refugees would not be welcome in their states.

Mr. Trump, meanwhile, has said that if he is elected he will ban all Muslims and migrants from countries experiencing terrorism from entering the United States.

A newly named U.S. cardinal, Archbishop Joseph Tobin of Indianapolis, clashed with Mr. Trump’s running mate, Governor Mike Pence of Indiana, over the issue last year. Mr. Pence had asked the archbishop not to resettle a Syrian family in Indiana, a request the archbishop refused.

The Obama administration announced last month that the United States would seek to welcome 110,000 refugees in 2017. A vice president at Catholic Relief Services told The Washington Post that the group welcomed the news, but that it did not go far enough in addressing the needs of "the 65 million globally displaced people around the world right now."

The pope echoed that refrain, describing the refugee crisis “a problem of the world” and urging political leaders to do more.

On the issue of migration more generally, Francis devoted several minutes of the speech to condemning “physical and social walls” that “close in some and exclude others.”

Mr. Trump has proposed building a wall along the U.S.-Mexico border, which led to a tussle with the pope earlier this year.

In February, following a visit to the border, the pope said in response to a question from a journalist that politicians who propose building walls instead of bridges are “not Christian,” leading to objections from the Trump campaign. The Vatican later clarified the remark, saying that the pope was not speaking about specific candidates.

It is not just Republicans on the receiving end of Catholic criticism around immigration.

Some Catholic immigration activists have been critical of the Obama administration for its mass deportations of undocumented people living in the United States and for what they say are human rights abuses in U.S. detention centers along the southern border.

For her part, Mrs. Clinton said that she will push comprehensive immigration reform during her first 100 days in office.

The pope said on Saturday that Christians should not give into the temptation to build walls, even in the face of “hateful and cowardly attacks,” a reference to global terrorism.

“Dear Brothers and Sisters,” he said, “all walls fall.”

The speech, given in Spanish to representatives of grassroots social justice organizations from 60 countries, included a lengthy a quote from the Rev. Martin Luther King Jr.

Francis has previously held up the civil rights leader as a great American in his speech to the U.S. Congress last year and he included a quote from King in “Amoris Laetitia,” his apostolic letter about family life.

On Saturday, the pope invoked King to urge the audience to combat fear with bridge building and love.

Francis said “mercy is the best antidote against fear” and that it “is much more effective than walls, that barbed wire fences, than alarms and arms, and it is free. It is the gift of God.”

He also touched on the need for individuals at the grassroots level “to revitalize” democracy around the world that are imperiled due to “the enormous power of economic and media groups that seem to dominate” and repeated his condemnation of placing money above human beings.

Christians have a duty, he said, to be active in political life, but he warned against corruption and arrogance.

“Anyone who is too attached to material things or the mirror, who likes money, lush banquets, sumptuous mansions, refined suits, luxury cars,” he said, should avoid going into politics—as well as the seminary. Instead, political leaders must lead by example, living frugally and humbly.

Francis also offered some advice on how to fight terrorism and oppression, saying, “the best antidote is love. Love heals everything.”