Pope Francis to journalist: ‘I am honored that the Americans attack me.’ 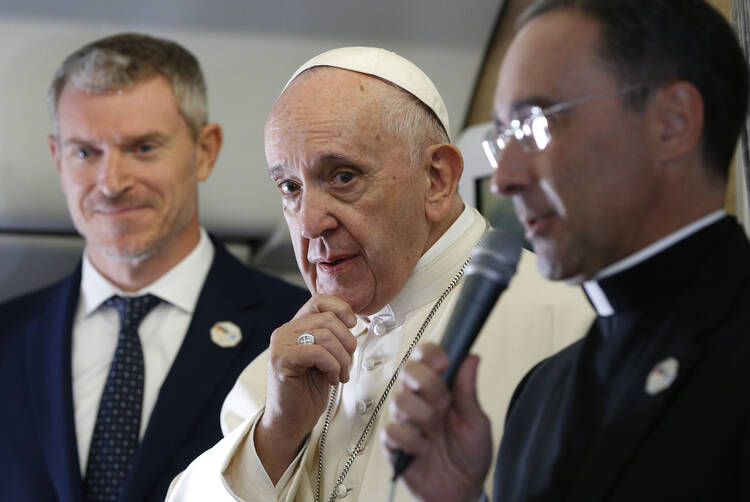 Pope Francis is pictured as he greets journalists aboard his flight from Rome to Maputo, Mozambique, Sept. 4, 2019. The pope will also visit Madagascar and Mauritius through Sept. 10. At left is Matteo Bruni, new director of the Vatican Press Office, and at right Msgr. Mauricio Rueda, papal trip planner. (CNS photo/Paul Haring)

In an informal exchange aboard the papal plane, Pope Francis told Nicolas Senèze that he is “honored that the Americans attack me” when the French Catholic journalist presented him with a copy of his book How America Wants to Change the Pope (Comment L'Amérique veut changer de Pape) on the flight from Rome to Maputo, Mozambique, on Sept. 4.

The book describes how a wealthy and often traditionalist sector of the American Catholic church—both clerical and lay—attacks Pope Francis and notes that it is already working, with projects such as the “Red Hat Report,” to ensure that the cardinal elected pope at the next conclave is to its liking. It was clear from the context that Pope Francis was referring specifically to that sector of the U.S. church that is mentioned in the book and not to anyone else.

The pope said he had tried to get a copy of Mr. Senèze's book, but it was not yet available for sale. He then handed the book to an aide and commented with a smile, “This is a bomb!”

Francis thanked Mr. Senèze, a journalist for the French Catholic daily, La Croix, for the book and told him that he had read an article about it in the Rome daily, Il Messaggero. The pope said he had tried to get a copy of it, but it was not yet available for sale. He then handed the book to an aide and commented with a smile, “This is a bomb!”

Cardinal Burke: It is ‘licit’ to call for the resignation of Pope Francis
Gerard O’Connell

Shortly after, Vatican spokesperson Matteo Bruni told journalists that “in an informal context, the pope wished to say that he always considers criticisms as an honor, particularly when they come from authoritative thinkers, and in this case from an important nation.” The pope’s comments indicate he remains aware of the attacks against him from Catholics who disagree with his magisterial teaching and his statements on the economy, climate change, the death penalty, divorced and remarried persons and L.G.B.T. Catholics, as well as efforts by some traditionalist U.S. Catholics to delegitimize his teaching and undermine his pontificate.

Mr. Senèze’s book details the opposition to Pope Francis—which Senèze says comes from “a small minority”—including Cardinal Raymond Burke, Archbishop Charles Chaput and Archbishop Carlo Maria Viganò (the former papal nuncio to the United States), as well as from wealthy lay people like Tim Busch and some U.S. Catholic authors like George Weigel, together with a sector of the U.S. Catholic media.

Maybe this is an opportunity for dialogue and reason as emphasized in the article on Dr. Sexton.

Trolls just want to have fun: People who troll like to post comments to websites or communities online that cause trouble, insult others, and cause general mayhem, just for the sheer pleasure of seeing what happens when they do so.
https://www.sciencedirect.com/science/article/abs/pii/S0191886914000324

So, are you saying this site should be an echo chamber?? And this is good because...???

Is there a release date for this book in English translation? I would love to read it!

I'm honored this Pope doesn't approve of me. He's a mean-spirited cleric and bully.

The Holy Father turns his cheek, and makes a small joke, and also he expresses respect for those who have attacked him so unfairly and dishonestly. In his response to these critics, he demonstrates a Christ-like openness, kindness, and humility. Read some of the comments here to see how mean-spirited the criticism can be - ugly insults and lies against a manifestly good man.

When the Pope takes time to meet with common Catholics in America, then that will show he is all inclusive. Look who he has met with from the US. Celebrities, politicians and others who are powerful and wealthy and advocate for abortion as well as other issues that are against church doctrines. And yet his message to the common American Catholic, you know the group who for years provided the financial support for the Catholic Church mission around the world, well we are still waiting.

Well said, I hope me not being a Catholic is ok to comment.

Jesus said "No one is good but only God." So you are wrong there. The Holy Father has shown himself to be a small minded misogynist (remember his Mother in Law "jokes" - not funny) who protects the likes of Cardinal McCarrick and sells out the entire Chines Catholic Church suffering under the boot of the Chicoms. Wake up.

I love this Pope so much! He’s the true courageous disciple of Jesus who never backs down in the face of bullies and evil. The comments here remind me of these laments in the Bible “…Have you come here to torment us before the appointed time…”

May God always be with you, dear Holy Father!

I always pray for the welfare and enlightenment of the Pope. I hope he OPENS his mind and heart and rids himself of these pernicious prejudices. God help him.

Some people are more enlightened than others.

Beautiful words, Douglas. Thank you very much for them; I make them mine.

It is because of this Pope that I have left the Church.

It is because of this Pope that I have returned to the Church. Is there not space in the expansiveness of God's love for all of us?

Are you kidding Michelle? This Pope has demonized people who don't want illegals crossing the border while he sits behind a 20 foot wall with some of the most strict immigration laws on the planet. The last thing this Pope cares about is being inclusive. He has attacked people who don't believe criminals should be allowed to enter without consequence and attacked those who don't accept the fake religion that humans are the primary cause of climate change. He is the direct opposite of being inclusive.

Totally disagree, Guava. I have never heard this pope “demonize” anybody. Perhaps you are reading what other people have said about him, rather than what he himself has said.

Come back. It is not just his Church. It is Jesus' Church and He is the Way, the Truth and the Life. Please comme back.Make yourself heard and pray pray pray.

I doubt that, seriously. He may function for you as an alibi, but not as “the” cause ... this Pope was not “the” cause for you joining or staying in this Church, Therefore, he cannot be “the” cause to leave this Church either.

Karen, my dear, just listen to yourself!
What you stated just tells me that you never believed in Christ or his church because the church is Christ's and the pope is his vicar. Further, the vicar has the authority delegated to him by Christ himself to tie and untie. This is bigger than all of us and the pope himself. What you stated only shows that you really never believed in Christ or his church because if you did you would know that the power of Hell will not prevail over it and you would also be more understanding of the Pope and his magisterium. Unless of course you're a troll in which case there's nothing we can do about that. A pity either way

Wow, the trolls are working extra hard here… Suddenly, there are vicious attacks from those that never shown up here before!!! What are they afraid of? This is so similar to the cries in Matthey 8,29 - They cried out, “What have you to do with us,* Son of God? Have you come here to torment us before the appointed time?”

So people who think the Pope is acting like and saying hateful, hurtful things against an entire nation of people , according to you are demons. Huh.

So people who think the Pope is acting like and saying hateful, hurtful things against an entire nation of people , according to you are demons. Huh.

Helen McCaffey
Not exactly demons but only friends, cousins and relatives of the devils.(Revelation12:10)

WOW that seems a bit harsh. I wonder do you also use text out of King James Bible. Myself would enjoy a New version that includes more from the women in Jesus's life and more of the KJ..

This is not very Christ like now is it.Not only is it hateful it is also racist to call out an entire group of people. Well the Church survived the Borgias.

Helen McCaffey
Yes it is, the people who live a life and make career out of accusing the Pope day & night are imitating the works of the devils.Revelation12:10

I would like to learn more about the real reason for Pope Benedict's "retirement", and the interests behind Pope Francis' selection.

The Pope is supposed to be the focus of unity in the Church. Unfortunately, Pope Francis increasingly comes across as relentlessly partisan. He is eager to "dialogue" with Marxists, atheists, and Muslims, but he has no interest in talking to conservative Catholics.

Or any Catholics who are not Socialists or any American Catholics.

America Magazine, shut down the comments forever and ever. It's an occasion of sin.

How sad these negative comments below are. He is a wonderful Pope. You'll realize that someday.

I replied to Andrea not Cherub

The Rad Trads channel like Dr.Marshall "Discussiping Show",M.Matt,M.Voris, John Westen of Lifesite News, Anthony of Return to Tradition, Charles of Watchdog for Truth. etc are spreading Fake News by Gossiping and twisting every words of Pope Francis, they already make a career imitating Satan the Great Accuser. This channels are earning evil money by accusing Pope Francis day & night. This Rad Trads are the real friends,cousins and relatives of the devil by imitating their adversarial role. Revelation12:10

The Pope, the Petrine ministry, ought to be an effective sign and instrument of unity. Unfortunately, Francis is becoming more and more a partisan-political activist. This is not good.

Sadly, I must agree.

May God continue to bless, protect and guide you always Pope Francis. You are proclaiming the Gospel, the Good News of Jesus Christ to the entire people of God.

1
Exclusive: Pope Francis discusses Ukraine, U.S. bishops and more
The Editors
2
What I learned about the priesthood of all believers as a priest lay dying in a hospital room
Michael Strande
3
Ita, Maura, Dorothy, Jean: The legacy of 4 missionaries murdered in El Salvador 40 years ago
Margaret Swedish
4
Catholic Republicans must denounce Donald Trump’s meeting with antisemites
J.P. Carroll
5
Why indifference is so important to Jesuit spirituality
J.D. Long-García