Pope responding to questions on Trump: ‘A person who only thinks of building walls, and not building bridges, is not Christian.’ 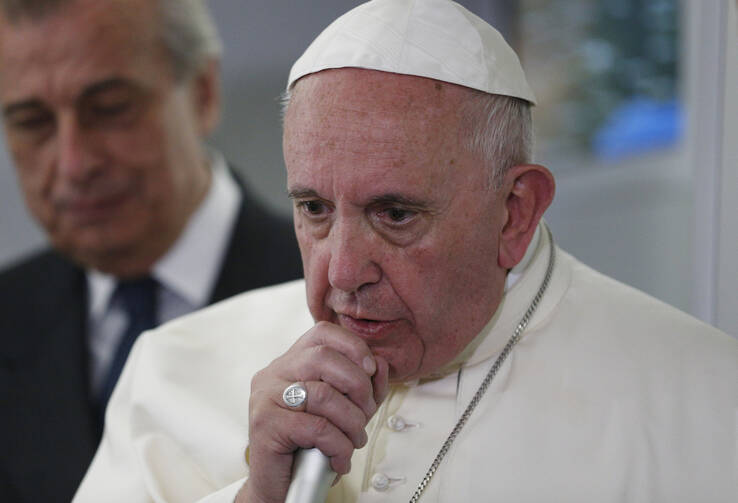 “A person who thinks only about building walls, wherever they may be, and not building bridges, is not Christian. This is not in the Gospel,” Pope Francis stated when responding to questions regarding Donald Trump.

These questions were prefaced by information that Trump has announced that if he were to become president of the United States he would deport 11 million illegal immigrants from the country, in that way separating families, and build a wall along the U.S. border with Mexico.

When asked “if an American Catholic could vote for a person like this?” Francis responded, “As far as what you said about whether I would advise to vote or not to vote, I am not going to get involved in that. I say only that this man is not Christian if he says things like that.” Then, in relation to Trump, he added, “We must see if he said things in that way and in this I give the benefit of the doubt.”

When told that Trump in a recent interview had said that Pope Francis is a political man, and indeed perhaps a pawn of the Mexican Government when it comes to the policy of immigration, he responded with humor:

Thank God he said I am a politician because Aristotle defined the human person as an 'animal politicus' (a political animal). So at least I am a human person. As to whether I am a pawn, well, maybe, I don't know. I'll leave that up to your judgment and that of the people.

Francis’ words are sure to resonate loudly in the U.S. political campaign, but it is worth noting that he never mentioned Trump by name and even said he gives him the benefit of the doubt as to whether he actually said such things regarding the immigration measures mentioned.

The pope refused to get involved in the U.S. presidential regarding how Catholics should vote, just as he refused to get drawn into the ongoing debate in the Italian parliament regarding same-sex marriages, and the adoption of children by homosexual couples. (The Parliament is about to vote on these questions.)

He told the questioner: “The pope doesn’t get mixed up in Italian politics. At my first meeting with the [Italian] bishops in May 2013, one of the three things I said was: with the Italian government you’re on your own. Because the pope is for everybody and he can’t insert himself in the specific internal politics of a country. This is not the role of the pope, right?”

When a second questioner recalled that a 2003 document from the Congregation for the Doctrine of the Faith said Catholic members of Parliament should not vote for such legislation, and asked what he thinks, Francis replied: ‘A Catholic parliamentarian must vote according to his well-formed conscience. I would say just this. I believe it is sufficient because—I say well-formed because it is not the conscience of what just seems to me.”

These questions were some of the high-points of an hour-long press conference in which the pope responded to 12 questions, in Spanish and Italian, and showed no sign of tiredness even after a grueling week in Mexico, with an earlier stop over in Cuba. Indeed, he was full of energy.