We asked Catholic women if they supported the possibility of women deacons. Here is what they said. 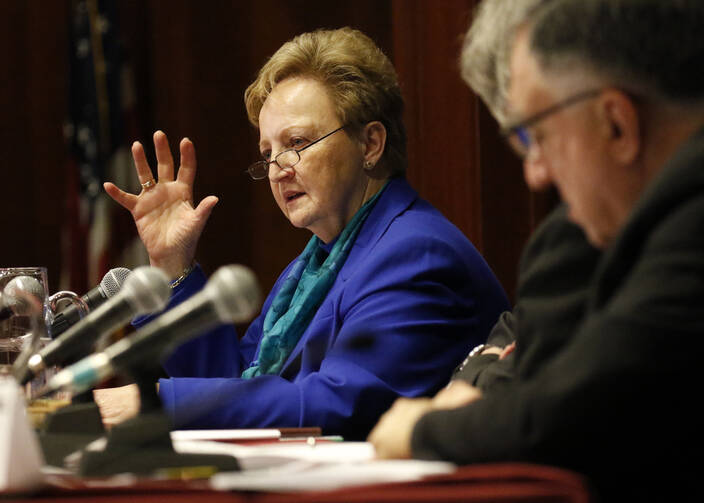 Dominican Sister Donna Ciangio, chancellor of the Archdiocese of Newark, N.J., speaks during a symposium on the history and future of women deacons Jan. 15 at Fordham University's Lincoln Center campus in New York City. The event was hosted by the Fordham Center on Religion and Culture. (CNS photo/Gregory A. Shemitz)

The Study Commission on the Women’s Diaconate may remain uncertain about whether women should be ordained to the diaconate, but the majority of American Catholic women are not: Six in 10 American Catholic women support the possibility for women to be ordained as permanent deacons,according to our national survey published last year in partnership with the Center for Applied Research in the Apostolate at Georgetown University.In our nationally representative sample of 1,508 women, one in five indicated that they may support women deacons but want to learn more first. Twelve percent said they “didn’t know,” and 7 percent said that they would not support it.

Support for women deacons was more likely among women with more education, women who identified as Democrats, non-Hispanic white women and those who attend Mass less often. The idea of women deacons received less support from women with less education, Republicans, Hispanic/Latino women and frequent Mass attendees. Women who were part of the Vatican II (born from 1943 through 1960) or Post Vatican II (born from 1961 through 1981) generations were more likely to support women deacons than women born before or after those generations, but that was because the oldest and youngest generations were more likely to express uncertainty around the issue. There was not a significant difference among generations with respect to those who responded with a firm “no.”

These figures are especially interesting in light of another recent study, released by CARA this January, on the U.S. bishops’opinion on the possibility of women deacons. As a group, they were somewhat less enthused than our survey respondents: Just 33 percent of bishops in the United States thought the church “should” ordain women as deacons. But 54 percent of U.S. bishops said that if it were allowed, they would “consider” ordaining women as deacons in their dioceses.

Six in 10 American Catholic women support the possibility for women to be ordained as permanent deacons, according to our national survey published last year.

For many bishops the question has less to do with whether women “should” be ordained deacons than whether they can be: only 41 percent saying they believed it is “theoretically possible” to ordain women. Just 27 percent of bishops thought the church will move ahead with ordaining women to the diaconate.

If the bishops think women deacons could be helpful, why isn’t there more enthusiasm for them? The sticking point for some may be the question of whether women deacons were sacramentally ordained in the past. Scholars agree on the existence of women deacons in the early church, but the implications of their roles then for the church today may give some pause. Phyllis Zagano, who is a leading expert on women in the diaconate and a member of the Vatican study commission, has written that there is ample historical evidence confirming the sacramental ordination of women to the diaconate and that ordaining women to the diaconate today does not necessitate ordaining women to the priesthood. But not all members of the commission agree.

Scholars agree on the existence of women deacons in the early church, but the implications of their roles then for the church today may give some pause.

Of course, ordaining women deacons cannot be the sole answer to more fully including women in church structures, liturgies and ministries. The data show that the bishops largely seem to recognize this. The question of women deacons aside, 97 percent of bishops in CARA’s January survey said they believe “somewhat” or “strongly” that their diocese is “committed to increasing women’s involvement in ecclesial leadership.”

That is something that many Catholic women will be happy—and possibly surprised—to hear. Based on our statistics, many women have not perceived that commitment at the parish level. Just under one-fifth of Catholic women in the America survey (18 percent) felt that women were “very much” involved in decision-making at their parish. Thirty-five percent felt that women were “somewhat” involved. For women who attended Mass frequently, the percentage who agreed “very much” was 32 percent, versus 11 percent for those who attended a few times a year or less. This may indicate that those attending Mass frequently are more likely to be more aware of the women in those leadership roles, who are often behind the scenes and may be the ones making significant decisions.

We also asked women whether they felt the priests in their own parishes were doing a good job including women in decision-making. When framed in this more personal way, women felt more positive. “The more one believes women are involved in the decision-making of the parish, the more likely they are to believe priests are doing a good job,” Mark Gray, director of CARA Catholic Polls and a senior research associate, said via email. “Yet, even among those who disagree, there are some who still feel the priests are doing a good job.” The more strongly women “do not feel their parish or priest do a good job of inclusion with decision-making, the more likely they are to support female deacons,” he said.

It is often said that the church measures time in centuries, so perhaps a few decades spent on the question of women deacons can seem short in this context, but the issue still has an air of urgency, especially when considered in the context of evangelization. Our survey showed that many women who identify as Catholic are disengaged from the church: Only 24 percent attended Mass weekly or more, for example. And of the women surveyed who said they had thought about leaving the church, nearly half (48 percent) cited “the status of women in the church” as “somewhat” or “very much” a reason.

A liturgical and ministerial role that is visible at Mass on a weekly basis, like that of a woman deacon, could go a long way toward engaging many of the women who feel distant from the church and toward more fully incorporating the gifts of women into the church—something that has benefits for all Catholics.

I think if you ask women who left the Church in the past 30 years (and that's been quite a few of them), you'd find that one of the reasons that they did was because there was no room for them other than in the pews or cleaning the church.

Ellen B
3 years 2 months ago

Demand our leaders Ordain women priests and bishops and support dumping the permanent deaconate since it is completely unnecessary anyway. Why bother fighting for less than equality what a foolish thing to do. We are losing women at higher and faster rate now than protestant churches so if keep treating women less eventually we will be a church with few women which makes for less children and eventually no one goes anymore.

Right on! I don't understand the women who would be satisfied with half a loaf (diaconate) when they could have a whole loaf (priesthood). Why waste your time and energy on such a half measure when what we really want are women priests. All the women's groups working on becoming deacons could better spend their energy, money and talents to come in the front door rather than coming in via the servants' entrance. Even Amazon delivers packages at the front door!

How about a poll asking women if they think they should be treated equally with men in the church, allowed to be priests as well as deacons? The truth is, it doesn't matter what we women want - our opinions are ignored by the Pope, who thinks we are only good for looking decorative (the strawberries on the cake) and making/raising babies. Oh, and I almost forgot, he thinks we can also be priests' housekeepers.

I approve the ordination of women for both the diaconate and priesthood. I've been to faith traditions where women as priest / minister is very much accepted. I want no more "thinking" about the role of women within the Catholic Church. Just move forward and ordain women for total / complete participation within ordination.

If the purpose of the article/poll was to relay the "sense of the faithful" Catholic women, it has failed. How could one be a Catholic woman if one doesn't believe what the Church teaches or practice the sacraments. In this poll, only 24% of the women attend Mass weekly, only 30% go to confession at least once a year and only 43-49% think the Church's teaching is very or "somewhat" important on women priests, or contraception, etc. It even includes a few atheists and 47% don't even think the teaching against euthanasia is important.

The obvious conclusion from this whole deaconess debate is that it is only interesting to those who want to deny infallible teaching and have women priests. And, the only reason they want to deny infallible teaching is because they don't really believe that the Catholic Church teaches the truth. It is an attempt at a political power grab, pure and simple. It has nothing to do with the Truth and justice.

Women will be given a non-sacramental Women’s Auxilliary Deaconate to do the dirty work men will not do. To Shut them Up.

This poll is consistent with other polls on the major issues facing the sensus fidelium. We all know that only about 24% of Catholics attend weekly Mass, 80% disagree with the teaching on contraception, etc. This is the opinions of our sensus fidelium, like it or not. This does not mean that decisions should be based on poll numbers, but it does mean that we need to take such information into considerations. Many teachings, procedures and practices including the interpretation of Scripture, et al, are open to development based on advances in our knowledge in theology, philosophy, Scripture, tradition, human experience, et al.

On the issue of women and the possibility of their eligibility to an ordained deaconate, I agree with Ms. Zagano. There are good arguments on both sides of this issue. Unfortunately, I am disappointed that the members of this commission could not agree on the issue about whether women in the early Church were deacons or had roles that were equivalent to today and whether their role was considered sacramental. The question I have is this "what is considered an "agreement" among the commission members"? Is it 2/3rds of the members, 75% of the members or 100% of the members?

I support women as deacons in our Church and hope it comes to pass in my lifetime.

Tim - you missed the major point of my comments again, as usual. I have no interest in debating you on this topic.

Not debating you Michael. Just defining the term.