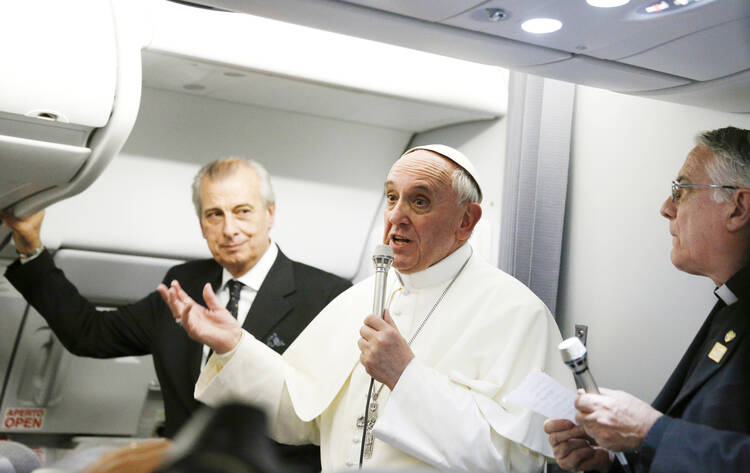 Here is the original Italian of Pope Francis's remarks today about gays and gay priests, from the very surprising interview, excerpted here on NCR, aboard the Pope's return flight to Rome.  The Pope also touched on divorced and remarried Catholics, women in the church, and fielded almost every hot-button topic that the reporters threw at him. The reporters I've spoken to have all professed delight and surprise in the free-wheeling conversation, which apparently took place during some turbulence on the flight.  The Italian may give the best insight into his thinking, and also, notably, uses the word "gay."

Or: "There is so much being written about the gay lobby. I haven’t met anyone in the Vatican yet who has “gay” written on their identity cards. There is a distinction between being gay, being this way inclined and lobbying. Lobbies are not good. If a gay person is in eager search of God, who am I to judge them? The Catholic Church teaches that gay people should not be discriminated against; they should be made to feel welcome. Being gay is not the problem, lobbying is the problem and this goes for any type of lobby, business lobbies, political lobbies and Masonic lobbies."

To my mind, Pope Francis's brief comment on gays reveals great mercy.  That mercy, of course, comes from Jesus Christ.   And we can never have enough of it.  The Pope's remarks also are in line with the Catechism, which teaches that gays should be treated with 'respect, compassion and sensitivity.'  But gays were not the only group to be shown mercy in the Pope's brief in-flight interview.  The Pope also asked for greater compassion for divorced and remarried Catholics, a group that has long felt marginalized in the church, and called for a "deeper theology" on the role of women in the church.  Today Pope Francis has, once again, lived out the Gospel message of compassion for everyone.
The lesser-noticed change in the Pope' revolutionary words during his in-flight interview was, at least according to the translation in the Italian-language "Vatican Insider," the use of the word "gay," which is traditionally not used by popes, bishops or Vatican officials.  This is a sea change.
More on the church's treatment of gays with "respect, compassion and sensitivity," here.
And on celibate gay priests here.

James Martin, S.J.
@jamesmartinsj
Show Comments (
2
)
Comments are automatically closed two weeks after an article's initial publication. See our comments policy for more.
Rick Fueyo
9 years 6 months ago
Amen for Pope Francis. He is so inSpiring!
Thomas Farrell
9 years 6 months ago
Pope Francis's comment shows the kind of sensitivity that Anthony de Mello, S.J., discusses in THE WAY TO LOVE (reissued by Image, 2012). Tony de Mello sees sensitivity as a sign of psycho-spiritual growth and development. So in the case of Pope Francis, we can conclude that Ignatian spirituality has helped him grow and develop.