2018 Catholic Church Sex Abuse Crisis: What you need to know

2018 Catholic Church Sex Abuse Crisis: What you need to know 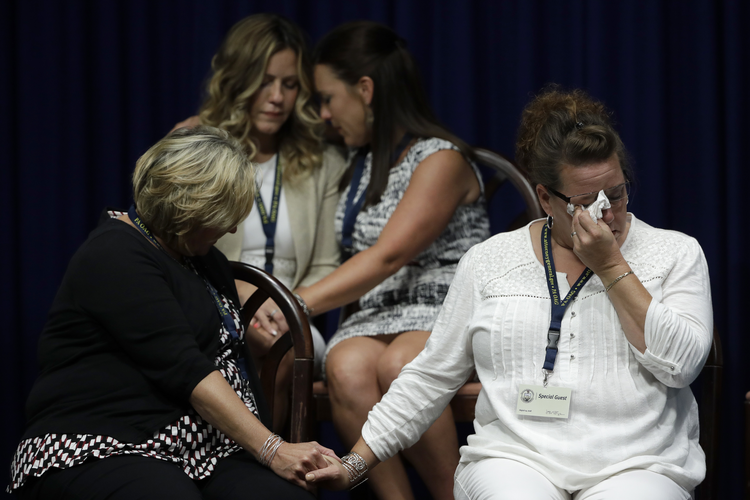 Allegations of clerical sexual abuse and its cover-up by church officials have rocked the U.S. Catholic Church this summer. On this page you will find a list of America’s reporting, analysis and reflections on the crisis in the church.

Late Saturday, Aug. 25, an 11-page letter attributed to Archbishop Carlo Maria Viganò was published by the National Catholic Register, Life Site News and a number of other sites that report about the church. In it, the former Vatican ambassador to the United States under Pope Benedict XVI and Pope Francis makes a number of allegations about how Vatican and U.S. cardinals, as well as Pope Francis and previous popes, handled allegations of sexual misconduct against former Cardinal Theodore McCarrick. He also calls on Pope Francis to resign.

Asked about the letter during his press conference while returning to Rome from Ireland, Pope Francis confirmed that he had read it but refused to respond to it in detail, telling the journalists on the plane, “Read the statement carefully and make your own judgment. I will not say a single word on this.” He also said they had the “journalistic capacity” to draw their own conclusions and that once some time has passed, he may speak further in response.

Below is a complete list of America’s coverage of the letter, the claims it makes and the responses of those involved.

The report has sent shockwaves across the church in the United States, with some comparing the crisis to the fallout that came after the 2002 Boston Globe’s Spotlight report that detailed abuse and cover-up. Below is a summary of responses and analysis that have followed since the report was released.

Former Cardinal Theodore McCarick, the former archbishop of Washington, D.C., was removed from ministry after an investigation in claims of sexual abuse against a minor were found credible by an investigation led by the Archdiocese of New York. Shortly after, other men alleged that they were also victims of sexual harassment and sexual abuse, including former seminarians. Below is our coverage of Archbishop McCarrick and the continuing fallout in Washington, D.C.

And yet not a single editorial acknowledgement of the failure of the Catholic press, including especially America Magazine, to cover plausible allegations of abuse by McCarrick for more than a decade. The degraded culture in many seminaries was also common knowledge in clerical circles. Again, America failed to report anything about it. It's time for some self-reflection about these editorial failures.

Skip, your right arm has gotten a lot of exercise on these forums given the dozens of rocks you throw at everyone. If you are advocating for Jesus Christ, no one would know it

Bill, I am not sure what else I can do in good conscience. The editors at America, including Fr. Martin in particular, are committing many lies of omission. Jesus does not need my "advocacy," whatever that means. He needs sinners like you and me to try to speak the truth with charity.

Ummmm....are you guys missing something?. Where is the article about everything we need to know about the McCarrick Fiasco? PA is a repeat of the Boston mess but more extensive in scope and more meticulously documented. But it is of the same NATURE. The McCarrick Debacle is of a much more critical nature with reference to the health of episcopal leadership PER SE and needs to be at least as thoroughly vetted and investigate. NO ONE has really done THAT yet outside the victims coming out in the blogosphere. Calling PA leaders for not doing their job and resigning where warranted NOW to take ultimate responsibility and accountability seems more than warranted. All well and good. BUT the McCarrick calamity needs to be invesigated and aired as to who knew what, when, and why on earth they did NOT do anything to prevent his rise to the pinnacle of power in our Church. There are probably an honor resignation or two or more warranted among leading prelates or Vatican bureacrats who knew and abetted by silence or even active support. Also, was he alone in rising so high despite such predation and ruination it has caused for our beloved Church? These questions MUST BE ANSWERED and not by the bishops themselves. An independent lay led commission needs to be empowered by Francis to get to the bottom of this stink and it needs to be reporting unfiltered directly to him as Pontif as our chief shepherd and the whole people of God. Anything less is going to stink of cover-up and will only make EVERYTHING harder due to the lack of trust it will engender. Count on it. Not to do so is to pepetutae the shame and scandal. I don't about you guys but I am sick of and fed up with our church the butt of obscene jokes and late night comedy. Given your past silence on this issue I would expect that America should be at the forefront of advocating for such a McCarrick Ascendancy Review to proceed forthwith.

I sure hope everyone has seen the movie "Spotlight". It's a horrible indictment against the episcopacy, and it's still happening. What does it take to stop this? The bishops knew - in spades, and they covered it all up. The guilty bishops should be in jail.

No Longer His Tree.
The lay in fear pray more than ever now, and this is what they hear; "I finally turned around to see, that it is the Church that has left me. Christ tells me true in Matthew 12:33 what I must do. I shall leave a formal separation letter on this sad tree letting it know has left Thee,.and by doing so..so sadly me".

Why is it just now that AMERICA is touching on this “sensitive” subject - keeping the Faithful in the dark? Actually, we haven’t been in the dark. This has been going on for decades, centuries everywhere the Catholic Church has been. I knew about this in a Dominican- run grade and high school, yet nobody dared to speak out. Finally, with the recent “#Me Too” movement that “victims” are speaking out. Pope Francis rightfully had been called out, yet, he’s still skirting the issue. Shame on him and his past actions in conspiring to cover up and shame on AMERICA to be so late in coming out as well. As Robt. Heinlein once quoted:” Love your country, but never trust its government”— this I feel, appplies to the Church. I will always have my faith in Jesus and the Roman Catholic Church, but I’ve lost my trust in her stewardship.

The editorial staff are doing a good job in keeping abreast of latest developments and responses, attempting to clarify ambiguous or disputed claims.

I am of the firm opinion that failing to headline that this is an institutional failure, that governance and exercise of discernment, power and authority is the key issue rather than a past epidemic of abuse of boys and young men disproportionately.

Please headline the issue of the institution, of abuse of power, of failure of accountability, of erroneous theories of sin and repentance and sacramental reconciliation.

For over 50 years, the Vatican has been misleading people about:

(1) The disciplinary cover-up of sexual abuse by clergy, saying that it is being managed.

(2) The doctrinal cover-up of the exclusively male priesthood, saying that it is dogmatic.

Both (1) and (2) are rooted in the conflation of patriarchal gender ideology and doctrines about human sexuality, so issue (1) cannot be effectively resolved as long as issue (2) is not resolved. The Church is "one, holy, catholic, and apostolic," but not necessarily patriarchal. For the redemption, and the sacramental economy, the masculinity of Jesus is as incidental as the color of his eyes. The Vatican should stop promoting patriarchal doctrines and allow Christ to call women to the priesthood and the episcopate. It is time to dismantle the patriarchal scaffolding that obscures the Catholic faith.