“Here I Am, Lord”: The little-known story behind a Catholic hit 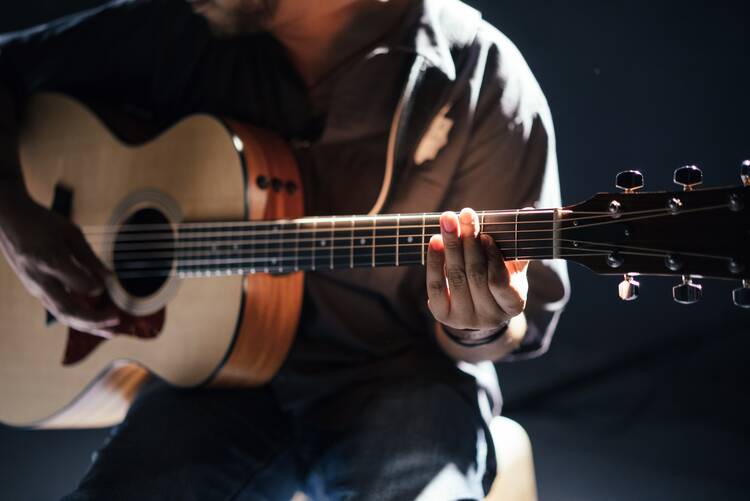 So begins one of the most popular—and most divisive—pieces of modern liturgical music.

Dan Schutte’s “Here I Am, Lord,” consistently scores highly in surveys of Catholics’ and Christians’ favorite hymns. An informal Twitter survey of America readers’ opinions on the song brought a variety of responses, all of them strong.

Already with the first line, a flurry of critics complain, “Don’t make me sing the part of God!” Some even take issue with my calling the song “music.” Yet it evokes in others a wave of nostalgia and comfort.

It's my favourite hymn. I feel the lyrics are about being called by God and trusting him to walk with you through everything.

Can't stand it. My daughter smirks at me when it starts playing because she knows I hate it. Would pay big $ to never hear again at Mass.

Love it b/c I heard it often while going through RCIA some 20-plus years ago. Realize it's the liturgical equivalent of junk food.

Love it or hate it, most Catholics could probably sing “Here I Am, Lord” from memory after hearing it so many times. (We even sang it at my parish while I was writing this article.)

Dan Schutte, the song’s composer, never imagined the song would become so popular.

Mr. Schutte was a 31-year-old Jesuit studying theology in Berkeley, Calif., when one of his friends asked him to write a song for an upcoming diaconate ordination Mass.

“I sort of had to catch my breath, because he was knocking on my door on Wednesday and I knew the ordination was on Saturday,” Mr. Schutte, who has since left the Jesuits, told America.

His friend wanted the song to include the images of the word of God, the light of Christ and the bread and wine—images that would eventually appear at the ends of the verses: “Who will bear my light to them?” “Who will speak my word to them?”

At the time, Mr. Schutte had no idea how to work the images into the song. He recalled thinking, “Gosh, I don’t know what to do with that.”

On top of the short notice, Mr. Schutte had been suffering from the flu for several days. He sat at his desk with his guitar and a blank sheet of staff paper in front of him, praying, “God, if I’m going to do this for my friend, you’re going to have to help me.”

Mr. Schutte said he often uses Scripture as the basis of his songs, so as he thought about the idea of vocation for the ordination Mass, he turned to the stories of the prophets, like Jeremiah, who asked God to give him the right words to say.

Love. Sang it at my first Mass. "Calling in the night" resonates with my many yrs struggling with the "priesthood or nah?" question/mystery.

“In all those stories, all of those people God was calling to be prophets have expressed in one way or another their humanness or their self-doubt,” Mr. Schutte said.

That, combined with feedback from the other St. Louis Jesuits—a group of young Jesuit songwriters who popularized folk-influenced liturgical music in the 1970s—was why Mr. Schutte changed the lyrics from a confident “Here I am, Lord; here I stand, Lord” to the self-doubting final version: “Here I am, Lord; is it I, Lord?”

Mr. Schutte sketched out “Here I Am, Lord” over the course of two days. On Friday evening, he walked to his friend’s house to deliver the song, pencil in hand, scribbling edits along the way.

“At that point,” he told me, “I really had no sense that the song would be any good, and I was actually very nervous.”

Mr. Schutte said he does not remember much from the diaconate ordination, except that people seemed to relate to the song.

“I couldn’t figure it out,” Mr. Schutte said. “If only they knew the story of the last two days of my life trying to make this work!”

One of my favorite songs in a worship/reflection settings. It speaks to my heart on a personal level.

I love it. Sometimes when I find myself complacently walking backwards in my faith I know must tell the Lord I am here completely.

Mr. Schutte says he has not received much negative feedback for the song. “I have other pieces they do that for!” Mr. Schutte laughed. He composed a number of other popular Catholic songs, including “City of God,” “Only This I Want,” “Blest Be the Lord” and “Though the Mountains May Fall.”

Mr. Schutte said the positive reception of “Here I Am, Lord” has continued consistently since the song’s premiere in 1979 and its publication in 1981. He even has a file of letters he has received praising the song.

One of his favorites came from an army captain serving in Afghanistan.

Love it or hate it, most Catholics could probably sing “Here I Am, Lord” from memory.

The captain wrote that the troops would gather in a field for Mass, near where they were fighting, and their chaplain would lead them in singing “Here I Am, Lord.” The servicemen and women who had grown up with the song could all sing it by heart.

“We stand here in this awful place, where we are asked to serve our country but fear for our own lives, and we sing ‘Here I Am, Lord,’” Mr. Schutte recalled the captain saying.

Matt Maher: Jesuit spirituality could save the world
Jesuitical

Mr. Schutte has received other letters from people suffering terminal illnesses or from their spouses, who say the hymn has helped them face their hardships with the hope that God accompanies them.

“Their spiritual journey is to say, here I am, Lord; I’m going to walk this through this journey in my life with you,” Mr. Schutte reflected.

I asked Mr. Schutte how he reacts when he receives personal, emotional letters like these.

“There’s a whole constellation of feelings that surround it for me,” he said. “I feel so grateful that God seems to have chosen that song to accompany people through so many moments of their life…. I didn’t plan that. I didn’t know that the song was going to be special. I’m very aware that God is doing something beyond me when I get those letters from people…. It’s also very humbling because it’s something way, way far beyond what I can do.”

This is the song that is similar to The Brady Bunch theme song.
Not a fan of music that has us singing as if we are God...and how many times do the words “I” and “me” show up in the lyrics? If people want to listen to this kind of music as part of their personal devotions, that’s one thing but I don’t think this kind of music should be (over)played at Mass.

Mary's Magnificat has plenty of 'me', and it begins with My. The Our Father begins with Our, and has us, our, we aplenty. The Psalms are filled with these self-referential personal pronouns. It is an essential part of Christian prayer. And plenty of the scripture, including plenty of the readings at Mass, include speaking in the person of God. That said, the song seems particularly arranged to be a cantor-people back and forth, where each would sing "their part".

This music was special to me in my own conversion and calling, and it still has the effect of returning me to that original grace. It is simple, relational, and scriptural, and, from the information in the background story, seems inspired. Thanks for the article.

I have never been able to finish this hymn without waves of emotion rising up and having to stop, take deep breaths and I think oh man, here it comes, the Holy Spirit is overflowing and bursting inside me. “It is I Lord” is usually the trigger.