Decisions regarding accused clerics in Buffalo are focus of new scrutiny 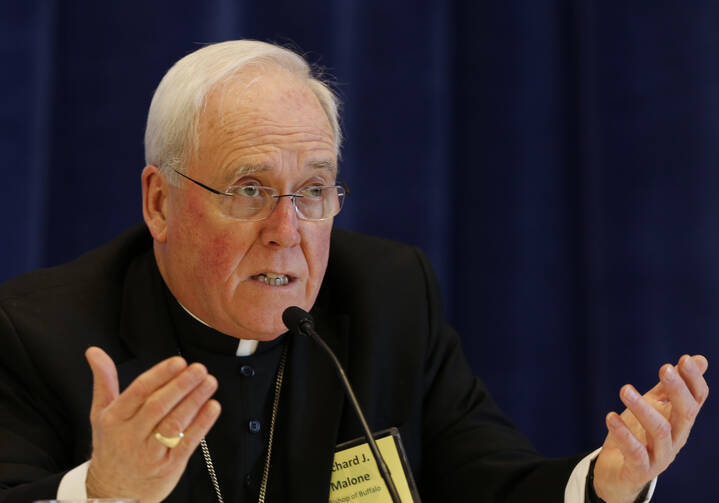 Bishop Richard J. Malone of Buffalo, N.Y., speaks during a news conference Nov. 16 during the 2015 fall general assembly of the U.S. Conference of Catholic Bishops in Baltimore. (CNS photo/Bob Roller)

Bishop Richard J. Malone, a former auxiliary bishop for the Archdiocese of Boston under Cardinal Bernard Law who now leads the Diocese of Buffalo, is facing accusations that he mishandled cases of sexual misconduct by priests in his diocese. According to reports published this week by the ABC affiliate WKBW, Bishop Malone returned to ministry a priest whose behavior at a Catholic high school raised the suspicion of parents and administrators. In another case, the bishop is accused of not taking seriously claims by young men that they had been subjected to unwanted sexual advances by another priest.

The reports come as the Diocese of Buffalo faces criticism that it has mishandled allegations of sexual misconduct by priests and as it weathers calls for an independent investigation into its practices. The diocese did not respond to requests for comment on the reports.

In March, it released a list of 42 priests who were credibly accused of sexual abuse of minors over decades, and it launched a financial settlement program for victims of abuse. Since then, about three dozen more priests have been accused of sexual misconduct, including some alleged to have abused or harassed adults.

On Aug. 22, Erie County District Attorney John J. Flynn confirmed that his office was consulting with New York’s attorney general about possibly conducting an investigation into how the Diocese of Buffalo has handled allegations of sexual abuse. New York Attorney General Barbara Underwood said last week that her office is open to an investigation.

The Diocese of Buffalo faces criticism that it has mishandled allegations of sexual misconduct by priests and as it weathers calls for an independent investigation into its practices.

The developments in the church’s ongoing sexual abuse crisis follow allegations earlier this summer that Archbishop Theodore E. McCarrick sexually abused a minor and harassed young seminarians, charges that prompted his removal from ministry and his resignation from the College of Cardinals. And earlier this month, a grand jury released an 900-page report describing in detail sexual abuse in six Pennsylvania dioceses.

Concerning Bishop Malone’s handling of harassment cases, one report from WKBW says that a priest in the diocese, the Rev. Arthur S. Smith, sent a Facebook message in 2011 to an eighth-grade student using the words “love you,” which prompted a complaint from the student’s mother.

Bishop Malone’s predecessor, Bishop Edward U. Kmiec, suspended Father Smith from St. Mary of the Lake School in Hamburg, N.Y., in 2011—the diocese told the community the priest was on a medical leave. But in 2012, Kristine Hider, the school principal, who described the priest as “a predator and a groomer of young children,” reported that he was still visiting the school.

Although Bishop Kmiec had removed the priest from the school, Bishop Malone, six months after his installation, returned Father Smith to church work, assigning him to be the chaplain at a nursing home, where he would not be near minors, the report says.

Despite concerns from parents and school administrators that Father Smith exhibited troubling behavior, the priest was not accused of the abuse of a minor.

But in 2013 Father Smith heard confessions from teenagers at a Catholic youth retreat, prompting Ms. Hider to send a letter to the diocese expressing her anger.

The bishop replied to Ms. Hider, explaining that Father Smith’s interactions with the student did not violate rules laid out in the 2002 document U.S. bishops adopted to protect minors, the Charter for the Protection of Children and Young People.

That is, despite concerns from parents and school administrators that Father Smith exhibited troubling behavior, the priest was not accused of the abuse of a minor. This meant that, according to the church’s rules, his case did not need to be brought to the diocesan review board, a group composed mostly of laypeople who review allegations of sexual abuse against minors.

But Kathleen McChesney, a former F.B.I. executive who was also the first executive director of the U.S. bishops’ Office for Child and Youth Protection, told America in an email that while she could not comment on the specifics of the Buffalo case, she believes bishops should avail themselves of the experts on their review boards for a broader range of issues related to safe environments—not only when allegations of abuse surface.

“I always recommend that dioceses use their review boards to provide guidance and recommendations regarding individuals who violate boundaries and present risk of offending,” she said. “Although the boards are consultative bodies to the bishops on these matters, some bishops think they should only use them for charter-related matters.”

Bishops should avail themselves of the experts on their review boards for a broader range of issues related to safe environments—not only when allegations of abuse surface.

Ms. McChesney said review boards should be involved in investigating claims that a priest acted inappropriately with a minor short of abuse, such as communicating on social media and saying something inappropriate. She noted that after an investigation, it is sometimes appropriate to return a priest to ministry..

“Each case and set of circumstances should be evaluated by professionals. Some misconduct is ignorance, other is intentional,” she said, adding that “some can be corrected with discipline and/or training. Some cannot.”

“Regardless,” she said, “continued oversight is necessary.”

When Father Smith appealed Bishop Malone’s decision to send him for treatment, Bishop Malone defended his decision to the Vatican, citing the priest’s interactions with the student and accusations from the nursing home. He also noted that a seminarian had accused Father Smith in 2004 of climbing into his bed and touching his genitals, and he said Father Smith had caressed the forearm of a hospital patient in 2013.

Despite these reports and complaints, in 2015 Bishop Malone returned Father Smith to ministry and thanked the priest for his “service to our diocese as you assist various priests in local parishes.”

Earlier this year, Father Smith was removed from ministry after new allegations of sexual misconduct against a minor were deemed credible by the diocese. The diocese responded to the reports from WKBW, telling the station that “previous issues involving boundaries with minors were carefully and properly addressed” and that the new allegation of abuse has been forwarded to Rome.

In a statement to WKBW, Father Smith denied allegations of misconduct.

Dear brother bishops: The time for closed doors is over
Robert N. Lynch

“Those who know me well, especially my family and friends know, and I know that I have never abused another person in my life, sexually, psychologically or in any other way. This is the absolute truth, so help me God,” he said.

In a separate report published Thursday, Bishop Malone and the diocese are accused of allowing another priest, the Rev. Robert M. Yetter, to remain in ministry after receiving three complaints that he touched three young men inappropriately.

In one instance, Father Yetter was accused of placing his hand on the thigh of a 25-year-old, identified only as Kyle, whom the priest had brought to dinner and a movie, and leaving it there for around 30 seconds. Kyle complained to the diocese in 2017.

In a second instance, which allegedly occurred in 2007, Father Yetter was accused of serving wine to a 19-year-old during dinner at the church rectory and then kissing him and touching his genital area. Father Yetter admitted to the behavior when questioned by diocesan officials in 2017.

Because these allegations involve only adults, the diocese said they were not required to report the priest’s behavior to authorities, the story says.

Ms. McChesney said that even though the Charter for the Protection of Children and Young People covers the abuse of minors, church leaders nonetheless have an obligation to deal with sexual harassment and abuse claims by adults against priests.

“Bishops and religious superiors have, and have had, the ability to deal with situations in which there is abuse of an adult, including abuse of power,” Ms. McChesney said. “Hiding behind the fact that the Charter only relates to minors and vulnerable adults and thus does not require the offender to be held accountable, ignores reality, harms bodies and souls, and contributes greatly to the mistrust of church leaders.”

I’m so glad that the truth about clerical sexual misconduct with adults is coming to the fore. In times past the victim could be intimidated to believe the he or she was equally responsible for immorality. This manipulative minimization by leadership only served to sweep the issue under the carpet, and in the long run fostered the environment for continued harrsssment. Will we find that the people with integrity got disgusted and left, and those comfortable with duplicity were free to stay?

Thank you for writing this article and highlighting the serious longstanding problems in the Buffalo Diocese. The school that Fr. Art Smith was at was not a high school. It was a K-8 elementary school that has since been closed by the diocese. I am a former parishioner at St. Mary of the Lake parish and left around that tine (because we moved a town over).

As a lifelong Catholic and parishioner of accused priest Fr. Robert Yetter, I am full of disgust. How can the governing body of any church allow priests to continue ministering while preying on those they serve? We are done being lied to. We are done being the blinded fools. Heads will roll and many must go. It's long over-due!!!