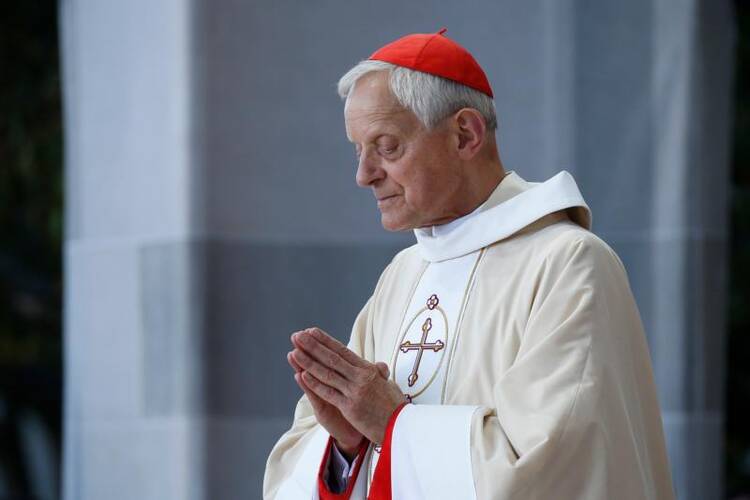 WASHINGTON (CNS) -- In an Aug. 30 letter to priests in the archdiocese, Washington Cardinal Donald W. Wuerl asked for "forgiveness for my errors in judgment (and) for my inadequacies."

He asked the priests to accept his "contrition for any suffering I have caused, as well as the grace to find, with you, ways of healing, ways of offering fruitful guidance in this darkness."

A copy of the letter was published online Aug. 30 on the website of the Catholic Standard, archdiocesan newspaper of Washington.

An introduction to the letter on the website said it was attached to an email where the cardinal said: "In this time of so much distress and pain, I send you this letter in the hope that it might tell you of my desire to be close to you and the people entrusted to your pastoral care, particularly as you prepare for this weekend's Masses."

"Whatever our response to this spiritual crisis, it has to begin at the altar -- and in prayer," wrote Washington Cardinal Donald W. Wuerl.

The cardinal said he celebrated Mass at the Cathedral of St. Matthew the Apostle on Aug. 26, "as so many of you did in your own parish church" focusing on the "spiritual context for so much of the pain, suffering, darkness and disillusionment brought on by the sexual abuse of children and young people by priests and its cover-up by bishops."

"Whatever our response to this spiritual crisis, it has to begin at the altar—and in prayer," he wrote.

He said the Mass focused on praying for abuse survivors and for the whole church "wounded by the shame and horror of these egregious actions."

"It is our people who also bear a deep hurt because they love their church and do not know what is coming next," he wrote, adding his appreciation for the priests' actions in being there with parishioners "even when there is so little to say, other than prayer."

The cardinal said he also prayed during the Mass for archdiocesan priests, noting: "Each priest—all of us—somehow bears the joys and sorrows of one another because we are all rightly seen as sharers in the priesthood."

He asked them to let parishioners know in upcoming weekend Masses Sept. 1-2 that he recognizes and shares their pain.

"Let them know I wish I could wipe it away even though that is simply not possible. I would give anything, as would all of us, to turn the clock around and have the church do everything right," he wrote.

The cardinal said he joins Catholics in "sorrow for all that has happened" and pleads for their "prayerful support as I with you and them try to do whatever I can to help move this church closer to the pathway that leads us from this darkness."

He said he planned to speak at a Sept. 2 Mass about "how we as a church—all of us laity, religious and clergy—might begin with faith strengthened in prayer to discern that level of reform rooted in accountability and transparency that would permit the church to enter a new era."

Cardinal Wuerl also asked the priests to "hold close in our prayers and loyalty our Holy Father, Pope Francis," noting that "increasingly, it is clear that he is the object of concentrated attack. At each Mass we pray for him by name. As we do so with our voices may we do so as well with our hearts. "

The cardinal ended his letter by saying he hopes archdiocesan priests "sense something of my anguish for those who have suffered and my sorrow for any of my failures to be there for both the abused and all who now feel a sense of alienation."

"In my heart, I now ask myself what is the way I can best serve this church that I, too, much love," he wrote. "Would you please let the faithful you serve know of my love, my commitment to do whatever is necessary to right what is wrong, and my sincere solidarity with you and them."

He should be laicized. These homosexual predators have cost Catholic faithful multiple billions of our donations!! Now we have to pay for this unfaithful man’s pension? Laicize them and also excommunicate the guilty bishops. They can show sorrow, penance and humility. In some cases civil prosecution is right and just. After true penitence, they can then be forgiven as Jesus says, but only if their sorrow is honest.

Please don't conflate homosexuality with this situation, Allison. This is a predator problem that has nothing to do with sexual preference. I do believe that if Cardinal Weurl is complicit in any way he needs to resign. Cleaning house of perpetrators and those who hid them one way or the other, is the only way to start this healing )IMHO.