As bishop looked on, abusive ‘Father Ned’ got new assignment 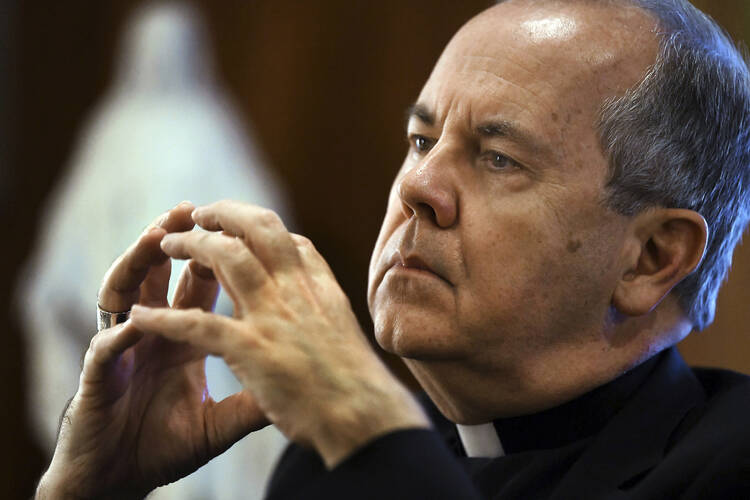 In this Aug. 21, 2018 photo, Joseph Bambera, Roman Catholic bishop of Scranton, Pa., discusses the clergy abuse crisis in an interview with The Times-Tribune in Scranton. (Butch Comegys/The Times-Tribune via AP)

A Roman Catholic bishop who apologized to his flock last month for the "misguided and inappropriate decisions of church leaders" is reckoning with his own role — revealed in federal court a decade ago — in the system that protected pedophile priests.

Scranton Bishop Joseph Bambera handled three sexual misconduct cases during his three-year tenure as diocesan vicar for clergy. He testified about one of them in a 2007 civil trial over clergy abuse.

Under questioning from a plaintiff's lawyer, Bambera acknowledged the diocese ignored its own policy by failing to report "Father Ned" — a pseudonym used in court — to civil authorities. He testified that Father Ned was removed from ministry only temporarily before getting another parish assignment. Once there, Bambera told the jury, Father Ned was caught "grooming" a boy for sexual assault.

The Associated Press has learned that Father Ned's real name is the Rev. Robert Gibson, who died in 2012. Gibson is one of about 300 predator priests named in a landmark Pennsylvania grand jury report that said more than 1,000 children in six Catholic dioceses have been abused since the 1940s.

Bambera's participation in the Gibson case highlights the fact that some of today's bishops, while they were rising through the ranks, helped their superiors shield priests accused of abuse from law enforcement and allowed them to continue in ministry — or at least had knowledge of the cover-up by senior church officials and didn't blow the whistle.

"He knew. He was part of the system," said Marci Hamilton, a University of Pennsylvania legal expert on child sexual abuse and the founder of CHILD USA, an advocacy group.

Bambera, who has emphasized his zero-tolerance policies toward clergy abuse since becoming Scranton's bishop in 2010, said Bishop James Timlin had already decided to reassign Gibson to another parish by the time Bambera became vicar in 1995. He said he worked to make sure Gibson and other priests accused of abuse were eventually barred from ministry.

"Could I have done things better? Do I wish that there were things that were different in those days? Yeah, I do, I do," Bambera told the AP. "I wish that law enforcement was engaged on a much much more regular basis than it had been." But he said there was only so much he could do: "I worked for Bishop Timlin and the decisions were his to make, they weren't mine."

"Could I have done things better? Do I wish that there were things that were different in those days? Yeah, I do, I do," Bambera told the AP.

On Friday, Bambera barred Timlin from representing the diocese in public, citing his failure to protect children from abusive priests. Bambera said in a statement announcing Timlin's punishment that the grand jury report had also "caused me to reflect on my own role in handling allegations of abuse in the church" and "to consider my role and past actions in protecting children."

Bambera isn't the only current Pennsylvania bishop whose handling of old abuse cases has come under scrutiny. Like Bambera, Pittsburgh Bishop David Zubik and Allentown Bishop Alfred Schlert were, at one time, high-ranking church officials tasked with investigating reports of sexual misconduct.

The grand jury said Zubik, on behalf of Pittsburgh Bishop Donald Wuerl, wrote a 1991 letter giving permission to a known child molester to transfer to a parish in the Diocese of Reno-Las Vegas. Wuerl, now a cardinal and the archbishop of Washington, D.C., has himself come under fierce criticism over his tenure in Pittsburgh. In Allentown, the grand jury said Schlert was involved in the diocese's 2002 effort to discredit a victim of priestly abuse. The bishop has flatly denied it.

In the Scranton case, the grand jury said the diocese was first contacted about Gibson — Father Ned — by an attorney for a man who claimed the priest had sexually abused him 20 years earlier. Gibson admitted to it, resigned as pastor and was sent to Saint John Vianney Center outside Philadelphia for treatment.

Before major church reforms in 2002, bishops often sent abusive priests to treatment and allowed them to return to ministry. Thus, eight months after his resignation and one month after Bambera became vicar for clergy, Gibson left treatment and went to live in a parish rectory outside Wilkes-Barre.

Gibson was reinstated "to a limited ministry as a parish priest" based on the recommendation of mental health professionals at St. John Vianney Center, diocesan spokesman Bill Genello said via email.

Bambera, as a top adviser to Timlin, participated in closed-door discussions about Gibson, according to his 2007 testimony. But he told jurors the final decision on what to do with the priest rested with Timlin. The grand jury extensively documented Timlin's role in concealing clergy sex abuse, but mentioned Bambera only a few times.

"To be fair to Bambera, he was not the ultimate decision maker here," said Nicholas Cafardi, a canon lawyer and former dean of Duquesne University School of Law.

Hamilton said Bambera's subordinate role is no excuse. She has called on Pennsylvania prosecutors to file child endangerment charges against bishops who concealed abuse as well as subordinates who took part. Hamilton noted the case of Philadelphia Monsignor William Lynn, the first Catholic Church official convicted over his handling of sexual-abuse complaints.

Lynn — who, as vicar for clergy, held the same position Bambera did in Scranton — served 33 months of a three-to-six-year prison term before a state appeals court granted him a new trial, which is pending.

"They all did the same thing," Hamilton said. "And what they did was put children in the pathway of pedophiles."

Bambera told the AP that while he didn't do the job perfectly, he did what he could to remove abusive priests, and "I clearly did raise my voice and my concern on many occasions about behavior and decisions that I didn't agree with."

It appears Archbishop Charles Chaput and EWTN were no better in handling their own priestly coverups.
##
“Chaput defends posting bail for Lynn”
“PHILADELPHIA Philadelphia Archbishop Charles J. Chaput on Friday defended his decision to post bail for Msgr. William J. Lynn, saying it was reasonable and just for the archdiocese to help him.

"Msgr. Lynn presents no danger to anyone. He poses no flight risk," Chaput said in a letter to parishioners that was released by the archdiocese.

"The funding for his bail has been taken from no parish, school or ministry resources, impacts no ongoing work of the church, and will be returned when the terms of bail are completed.“
“Chaput's action sends the worst possible message to current and former Catholic employees: No matter how recklessly, callously, and deceitfully you [endanger] kids and protect predators, the Catholic hierarchy will help you," Barbara Dorris of the St. Louis-based Survivors Network of Those Abused by Priests said this week.”
https://web.archive.org/web/20150507041309/http://articles.philly.com/2014-01-05/news/45862133_1_archdiocesan-secretary-lynn-chaput

David Stone, 54, formerly known as Father Francis Mary Stone, was host of the TV program "Life on the Rock" on Eternal Word Television Network. He fathered a child born in 2008. The mother was fired from EWTN and Stone was put on long-term leave of absence, according to Jefferson County court documents. (Screenshot from the EWTN program 'Life on the Rock')
A national group that monitors allegations of child sexual abuse by clergy has focused attention this week on the Alabama case of David Lawrence Stone, a Catholic priest and former EWTN TV host who was arrested in 2013 and charged with sexual abuse of a minor under 12.“
https://www.al.com/living/index.ssf/2015/03/catholic_priest_ex-ewtn_tv_hos.html

moral character and living examples of the Good Shepherd that is

Mr. Bambera did not do the right thing, he protected his job and his

rising position in the Church. He made a mistake that lead to further

Out of simple honesty he should resign his position as Bishop.

their office or no real changes will ever be effected.

A Fielder
4 years 4 months ago

Are priests people who turn off their conscience to be the mouthpiece of the bishop? I would like to think not, but given my experience in private industry, I know that mid-level managers and new recruits are rarely to blame to the culture which is created by the leaders at the top. Strong hierarchical institutions, like the military and church, do not allow subordinates to question their superiors. Some executives are excellent, others not so much.
Sometimes working for gradual change is all that can be done. What does the virtuous person do in the face of injustice? Work quietly for change in a situation where you have very limited power, or resign in protest and let someone else who is more power hungry take the job? The answer to this question might rightly depend on circumstances. The law might be able to draw a line between negligence and doing the best one can, but the law will not save us, and regardless of criminal penalties, we need to introduce transparency and accountability to our church culture.

OMG, "the decisions were his to make." There you have it, the corruption that is hierarchy and opbedience in the Catholic church. He can't even see that deferring to a "superior" wrong doer is morally wrong even though acting on moral principle would have derailed his precious church career. Ugh!

Clericalism is nothing new. Abuses by priests and bishops and popes are as ancient as the sins that laity commit. Until inner conversion takes place in all of us more dysfunction and pathology will evolve. It is the condition of man

the american church would appear to be ungovernable.