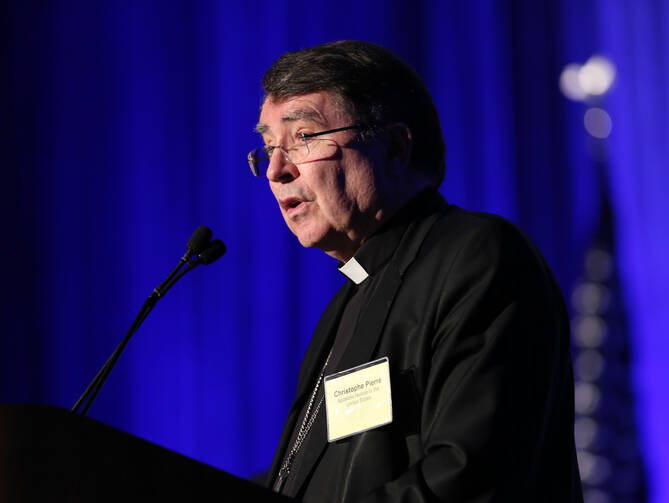 VATICAN CITY (CNS) -- The U.S. bishops are "deeply committed" to facing the reality of clerical sexual abuse and the history of covering it up, said the Vatican nuncio to the United States.

"All of us bishops, priests and members of the church must find a real response to the problem. Just a juridical or organizational response will not be enough to avoid evil," said the nuncio, Archbishop Christophe Pierre.

The archbishop made the comments at a news conference Aug. 19 in Rimini, Italy, before giving the opening address at the annual weeklong conference of the Communion and Liberation movement.

A crisis that is far from over: how the church can respond to sexual abuse
The Editors

Responding to reporters, Archbishop Pierre said he would have to be "very discreet" in talking about the crisis that began unfolding in June with the news that a church investigation found credible allegations that now-Archbishop Theodore E. McCarrick abused a minor. That was followed by a series of revelations about sexual harassment and misconduct in some seminaries and, especially, with the release in August of a Pennsylvania grand jury report about decades of abuse and cover-ups in six dioceses.

In his formal talk to the "Rimini Meeting," the archbishop focused on the human search for happiness and how every Christian has an obligation to be a credible witness to the truth that happiness is found in experiencing God's love and striving to live according to God's will.

The "encounter with Christ happens in and through the church," the archbishop said. "There is an ecclesial dimension to the encounter. The pope calls the whole church to accept its responsibility for facilitating this personal experience of Jesus, who fills life with joy."

Departing from his prepared text, Archbishop Pierre told the Communion and Liberation members: "We must never stand outside the church to judge her; we are the church. We all are responsible for the church, including when there are problems in the church."

"There is an ecclesial dimension to the encounter. The pope calls the whole church to accept its responsibility for facilitating this personal experience of Jesus, who fills life with joy."

A longtime Vatican diplomat who served in Haiti, Uganda and Mexico before being named nuncio to the United States, Archbishop Pierre said that "no matter the country or nationality, no matter the wealth or poverty, many people are searching for happiness -- for that which corresponds to the deepest longings of the human heart. They are on a quest to discover the forces that move history, for these are the same that make man happy."

People try "to cope with our sin, weaknesses and inadequacies by filling our lives with things we think will satisfy us," he said. "For some people it is alcohol, drugs and pornography; for others it is wealth, power and the desire for human respect. We will take anything we can to help us feel better, but in the end, it doesn't satisfy."

The responsibility of the church and of each of its members, he said, is to find a way to offer people the possibility of encountering Christ so that their sins can be forgiven, and they can know true joy.

"Pope Francis calls us to move from a pastoral plan of self-preservation to one of intense missionary activity, capable of meeting the deepest needs of the human heart," the archbishop said. "His election at this point in history is truly providential because, with it, the church received a pastor who will push her to be a church of encounter, of mercy and witness, engaged in reality."

AND you believe that WE THE BODY OF CHRIST will believe YOU? Amen!

This is the same TRIPE spewed out by the bishops 35 years ago when the abuse was revealed in the Dallas diocese. Today we all have to take a "Pontius Pilate" class before we can minister in any parish or diocese ministry. It is only designed to allow the clergy, (mostly bishops) to wash their hands of any liability. Meanwhile the leaders (bishops and now 3 cardinals) stand to get away with no accountability, while the good Catholics will be saddled with making financial restitution for the actions of the bishops. How do you explain that justice is served to the youngest Catholics?

GEEZ! I believe the central issue with clergy abuse is the false premise at the base of the Catholic Church expressed by Archbishop Pierre: “The encounter with Christ happens in and through the Church”. This is hogwash. The Catholic Church has placed itself to be somewhere between humans and God. This is the crippling, false foundation of all clergy abuse because it brainwashes children and fearful adults to believe, therefore, that the clergy can do no wrong. This belief must die in order for the crisis to end.

Could the good Bishops explain how their moral authority is not lessened when historically they have proved that their predecessors of the last generation could not tell when actions became criminal? But somehow they know what is a sin?

What does the good archbishop mean when he says that he must be “very discreet” in dis using the crisis. Wasn’t the concern to be discreet one of the chief causes of the crisis.?! and is it wise to suggest, as the archbishop seems to do, that this is a matter that must be handeled internally, as only or chiefly an ecclesial matter?

A Fielder
4 years 5 months ago

Yes, happiness is found in living the theological virtues (faith, hope & charity) and also the cardinal virtues (justice, temperance, courage and prudence), Hoping and working for justice makes me very happy. We should all want retributive justice for predators and restorative justice for victims. I am glad to “read” that the bishops want the same.

"The 'encounter with Christ happens in and through the church,' the archbishop said."
I don't think so... nothing will change until the church changes, until the church accepts women priests, married priests, has women in leadership roles, makes celibacy voluntary, fosters inclusion and equality, where everyone is saved not "the many" stops fighting statute of limitations in the courts, stops investigating itself, stops covering up. No more priesthood until then.