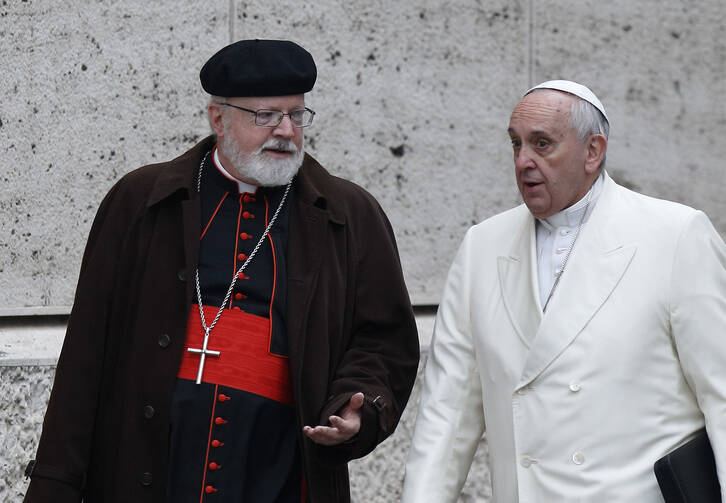 Pope Francis talks with Cardinal Sean P. O'Malley of Boston, president of the Pontifical Commission for the Protection of Minors, as they arrive for a meeting in the synod hall at the Vatican in this Feb. 13, 2015, file photo. (CNS photo/Paul Haring)

Cardinal Sean P. O’Malley wants Vatican officials to read a series of investigative reports chronicling alleged mismanagement in the Diocese of Buffalo, where Bishop Richard Malone, a former auxiliary bishop in Boston, is facing calls to step down over his handling cases of clergy sexual abuse.

Those reports contend that Bishop Malone did not take seriously allegations of impropriety made against two priests and that he allowed them to stay in ministry. The bishop is also accused of not being forthcoming about the number of priests who have been credibly accused of sexual abuse. The diocese initially reported the number to be 42, but it may be higher than 100.

Mr. Specht received a reply to his inquiry from a spokesman for the Archdiocese of Boston, who said the cardinal is “deeply concerned by the absence of recognition of the abuse experienced by the survivors and the responses or absence of response provided to survivors.”

“It is the Cardinal’s assessment that the information in your reports should be reviewed by the Church authorities who have oversight and jurisdiction for the action or inaction of diocesan leadership in Buffalo with regard to the reports of abuse,” Terrence C. Donilon wrote to Mr. Spect, who posted the email on his Twitter account.

“For those reasons, Cardinal O’Malley will send the documentation of your reports” to the apostolic nuncio to the United States, Mr. Donilon wrote.

The Diocese of Buffalo released a statement on Thursday, saying that while Bishop Malone has “the utmost respect” for Cardinal O’Malley and that while he welcomes a review with the nuncio, he takes issue with the content of the television reports.

“It is unfortunate that Cardinal O’Malley never contacted the Diocese of Buffalo to check on the facts and hear our side of the story,” the statement said. “The television reports provided to the cardinal’s spokesperson misrepresented the truth about how the Diocese of Buffalo did in fact respond to both child and adult victims of clerical misconduct. Every victim who reports abuse, whether abused as a minor or as an adult, is offered a meeting with a bishop.”

While Cardinal O’Malley is perhaps the highest-ranking church official charged with examining how the church handles allegations of sexual abuse, he does not have jurisdiction over other bishops and the commission he leads does not investigate specific claims. Instead, it makes recommendations to Pope Francis about best practices.

The commission’s mandate, and the role of its members, has caused confusion about where specific allegations should be directed, leading critics to say that the church needs more clear reporting structures.

The decision by Cardinal O’Malley to forward the reports to the nuncio appear to correspond to a pledge he made in September, when he announced that any allegations of sexual misconduct sent to his office would be addressed. He made that statement after revelations surfaced that his office in Boston received a letter in 2015 laying out allegations of sexual misconduct between former Cardinal Theodore McCarrick and other adults, three years before the retired archbishop of Washington was removed from ministry because of a separate charge of sexual abuse of a minor. Cardinal O’Malley said he never saw the letter because his secretary responded to it, as it concerned improper conduct between adults.

While Cardinal O’Malley is perhaps the highest-ranking church official charged with examining how the church handles allegations of sexual abuse.

In a Sept. 9 statement, the Archdiocese of Boston said Cardinal O’Malley “will now personally review all letters that come to his office related to the commission or are abuse related, even if they address matters outside his authority. He has made a commitment to refer those requiring attention to the nuncio to the United States and/or the Vatican.”

The sex abuse crisis continues to roil the Diocese of Buffalo, which is expected to be the central focus of an investigation of New York’s dioceses by Attorney General Barbara Underwood’s office. Earlier this month, Bishop Malone presided over a healing service in Buffalo, in which he admitted to making mistakes.

“I'm afraid that our way of handling that too often has been to quietly try to work with those priests and admonish them and maybe, maybe, maybe, they could have some limited ministry. I see now, that is wrong,” he said.

The turmoil in Buffalo comes at a time when dioceses throughout the United States are grappling with historical cases of sexual abuse and cover up. Law enforcement officials in at least eight states have announced they have either launched investigations into Catholic dioceses or intend to. A number of other dioceses, including all 15 in Texas, have said they plan to release complete lists of credibly accused priests on their own.

Update: This story was updated with a response from the Diocese of Buffalo on Oct. 11.

Should they not be sending all the information to law enforcement?
Think about this. Remember the Jay report? Garbage in, garbage out. It's totally bogus, because it was based on statistics from the bishops. It appears they under report. Or as we would say, they lie. I continue to be stunned at the culpability of the bishops involvement in all of this. I'm hoping for a federal RICO investigation. Lock them up. By bad bishops.

Yikes! 42 to 100 sexually abusive priests in one diocese.