Clericalism: The culture that enables abuse and insists on hiding it 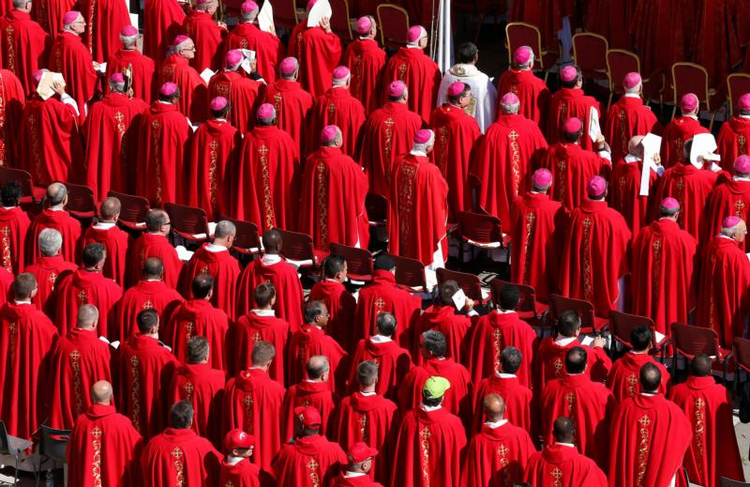 VATICAN CITY (CNS) -- Pope Francis blamed "clericalism" in the Catholic Church for creating a culture where criminal abuse was widespread and extraordinary efforts were made to keep the crimes hidden.

Throughout his pontificate, Pope Francis has targeted clericalism as an illness in the church, an ailment that pretends "the church" means "priests and bishops," that ignores or minimizes the God-given grace and talents of laypeople and that emphasizes the authority of clerics over their obligation of service.

"To say 'no' to abuse is to say an emphatic 'no' to all forms of clericalism," the pope wrote in a letter Aug. 20 to all Catholics.

Lead Us Not Into Clericalism
Daniel P. Horan

Clericalism, he said, involves trying "to replace or silence or ignore or reduce the people of God to small elites," generally the clerics.

Kathleen Sprows Cummings, a professor of history at the University of Notre Dame and author of an Aug. 17 New York Times op-ed piece on the abuse scandal, told Catholic News Service, "I was blown away" by the pope's focus on clericalism as the problem, "because that's what I felt."

What was different with the Pennsylvania grand jury report, she said, was not just the overwhelming scale and magnitude of abuse, "but that it really indicted the culture -- the culture of clericalism -- that allowed this abuse to continue and allowed it to be hidden."

"To say 'no' to abuse is to say an emphatic 'no' to all forms of clericalism," the pope wrote in a letter Aug. 20 to all Catholics.

"It's not just 'a few bad apples,' as we used to say, but it's this entire culture that makes it possible," Cummings said.

Natalia Imperatori-Lee, a professor of theology at Manhattan College, told CNS: "There is no doubt that clericalism is at the root of the abuse crisis. Clericalism is isolating and insular -- it cuts off the 'oxygen' of genuine solidarity and sharing-of-life with laypeople by creating a separate class, even a separate caste, within the church."

When people create "small elites" as Pope Francis called them, she said, "the temptation is to preserve 'us' and 'our vision/lives/privilege' at the expense of 'them' -- the laity, 'those who don't understand,' 'those who aren't burdened the way we are.'"

For more than two decades, Russell Shaw, an author and writer, has been warning of the disaster clericalism poses for the church. His book, "To Hunt, To Shoot, To Entertain: Clericalism and the Catholic Laity," was published in 1993.

"Clericalism is linked to a sense of entitlement, superiority and exclusion, and abuse of power."

Writing Aug. 6 for Angelus News, the news site of the Archdiocese of Los Angeles, Shaw looked particularly at accusations of sexual abuse and misconduct leveled against now-Archbishop Theodore E. McCarrick.

"Clericalism doesn't totally account for what happened," he wrote in Angelus. "But it is an important part of the explanation, and it's essential that we understand how that was so," particularly in explaining how the archbishop was able to rise so high in the church's hierarchy.

Giving any kind of integrity to a church investigation of the scandal will require the participation of laypeople, Shaw wrote, because "it would be a serious mistake to investigate the damage done by clericalism in a clericalist manner."

Australia's Royal Commission Into Institutional Responses to Child Sexual Abuse issued its report last December after five years of hearings and investigations, and it concluded that "clericalism is at the center of a tightly interconnected cluster of contributing factors" to abuse within the Catholic Church.

"Clericalism is linked to a sense of entitlement, superiority and exclusion, and abuse of power," the report said.

In addition, it said, "clericalism caused some bishops and religious superiors to identify with perpetrators of child sexual abuse rather than victims and their families."

The bishops of Australia plan to release a formal response to the report at the end of August. But in the meantime, Archbishop Mark Coleridge of Brisbane, conference president, told CNS that while the report is "essentially a secular eye upon church," it "seems to me fairly accurate to claim that 'clericalism is at the center of a tightly interconnected cluster of contributing factors.'"

"In seeking to combat clericalism," he said, "we need to be careful not to throw the baby out with the bath water. Clearly, it requires a radical revision of how we recruit and prepare candidates for ordination. Much has changed in our seminaries, but one has to wonder whether seminaries are the place or way to train men for the priesthood now.

"There will also have to be a change in the culture associated with the Catholic priesthood, which of course is more easily said than done," he continued in an email response to questions. "Part of that change will involve proper professional supervision for the sake of greater accountability, but also a greater sharing of responsibility with laypeople -- which in turn requires a reconsideration of our structures of decision-making."

"It will also involve a serious and practical consideration of the diagnosis of clericalism offered by Pope Francis over the years of his pontificate -- a diagnosis which is both disruptive and consoling, just like the Holy Spirit," Archbishop Coleridge wrote. "To accept and act upon that diagnosis won't in any way diminish the priesthood -- as some fear -- but will show what the priesthood can be in the very different circumstances we now face."

The Royal Commission report also tried to tackle some Catholic theology, claiming, "The theological notion that the priest undergoes an 'ontological change' at ordination, so that he is different to ordinary human beings and permanently a priest, is a dangerous component of the culture of clericalism. The notion that the priest is a sacred person contributed to exaggerated levels of unregulated power and trust which perpetrators of child sexual abuse were able to exploit."

Archbishop Coleridge said his acceptance of the idea of clericalism as a contributing factor to the abuse crisis obviously does not mean he accepts the Royal Commission's understanding of the theology of holy orders.

The phrase "ontological change" is what the church uses to describe what happens in ordination, he said; it affirms that "God actually does something in ordination, something which reaches into the depths of a man's being" and that "once a man is ordained, his relationships with other people and with God are radically and permanently changed."

So, while teaching that ordination brings a permanent change can contribute to clericalism, it does not have to, the archbishop said.

"There are ways in which clericalism hurts everyone. The laity is victimized and infantilized; the clergy is isolated and expected to be superhuman."

Imperatori-Lee also mentioned the teaching when commenting to CNS on how clericalism can infect the laity as well as priests and bishops.

"The laity, told repeatedly that the priest is special and uniquely holy -- 'ontological change,' 'indelible mark' -- is not inclined to believe the clergy capable of sin," she said, "and then when these allegations arise, and are corroborated, the breakdown in trust is irreparable."

"There are ways in which clericalism hurts everyone," she said: "The laity is victimized and infantilized; the clergy is isolated and expected to be superhuman."

Marie Collins, an abuse survivor and former member of the Pontifical Commission for the Protection of Minors, also welcomed the pope's aim at clericalism.

Tweeting Aug. 20, she said, "The condemnation of clericalism in the letter is good to see, as it plays a big part in the ignoring of the laity, survivors and experts. It gives rise to the ease with which church leaders can feel comfortable protecting fellow clerics despite their crimes against children."

Thank you for this thoughtful work. I hope it will be a topic of discussion among the hierarchy.

Clericalism defines the ordained or consecrated as better than the laity, which is not true. Some are better, some are worse. I would be willing to bet that another aspect of pedophile priests choosing their victims is that they chose the children of poor people.

One thing missing in this discussion of clericalism is the mistake of linking ministry to income. This is compounded when celibacy is required so that the cleric's entire life is tied to other clerics. His house-mates, his career and retirement, his social life and recreation, every facet of a cleric's life is dependent ONLY on the mutual opinions of fellow clergy. The actual quality of their ministry to the laity is irrelevant compared to the perception of their role by other clerics. The celibacy requirement and professionalization means that all see priests hard pressed to take up other options.
Catholics need at least two orders of magnitude greater numbers of Sunday presiders, trained to lead prayer and communal discernment of Christian decision making within supportive Christian communities. Our communities do not need professional theologians or institutional managers. Sunday leaders do not need to be economically supported by others any more than local Scout or United Way leaders do. Continuing education and episcopal oversight are needed but not four years of apologetic theology and canon law. Faculties for preaching and the non-emergency administration of Penance can depend on specific education and appropriate charisms. If the priestly ministries are mostly served by volunteers with their own economic careers and families, the entire clericalist environment is weakened.
The seminary and parish system we now have are the products of Medieval times and the Counter-Reformation. Widespread modern education, physical and social mobility, the separation of Church and State all undermine the assumptions of that era. Corporate rather than feudal structures eliminate the need for celibacy to protect the "patrimony" of church property. Catholicism needs to move away from institutions and professions and back toward small faith communities whose members all know each other and support each other in living in our money worshiping pagan society. We need many more priests rather than professional priests, even if they rotate out of service.