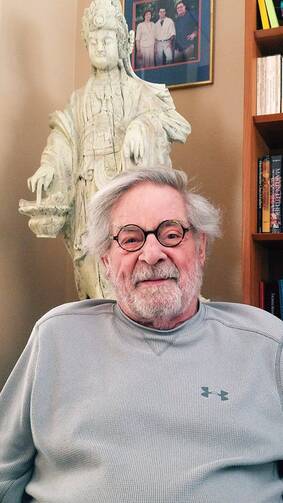 WASHINGTON (CNS) -- A. W. Richard Sipe, a psychotherapist and former Benedictine priest who became one of the country's foremost experts on clergy sexual abuse, died Aug. 8 at his home in La Jolla, California.

The San Diego Union-Tribune reported the cause of death of the 85-year-old Sipe as multiple organ failure.

Sipe's research into celibacy and priestly sexual behavior helped guide the work of church leaders and others studying, investigating and responding to the clergy sexual abuse crisis that emerged in 2002.

Sipe's research into priestly celibacy emerged after his Benedictine superiors asked him to train for and research the mental health problems and stresses of priests. His interest in the topic rose upon hearing from abusive priests and their victims as a psychotherapist.

His research led to the publication in 1990 of "A Secret World: Sexuality and the Search for Celibacy," a 25-year study (1960-1985) of the sexual behavior of Catholic clergy. Based on his findings, Sipe concluded that about 50 percent of U.S. priests practiced celibacy at any one time and that about 6 percent -- a figure he later raised to 9 percent -- had sexually abused children.

He maintained that the two phenomena were connected, arguing that priests who failed to remain celibate led to hypocrisy and secrecy under which child sexual abuse could occur.

His conclusions irritated some within the church, who dismissed them as being based on anecdotal evidence rather than formal research. Others, however, welcomed his work, which they said offered a warning to the U.S. church long before the sexual abuse crisis emerged.

Sipe consulted with the U.S. bishops until falling out of favor because of his critical comments on what he saw as a lack of action by the hierarchy to adequately respond to issues of abuse.

Sipe's research into priestly celibacy emerged after his Benedictine superiors asked him to train for and research the mental health problems and stresses of priests.

The psychotherapist also wrote various articles and books on celibacy and sexuality and spoke around the world about the subject. He served as a source for various media inquiries including that of The Boston Globe staff as it reported in 2002 on the mishandling of clergy accused of abuse in the Archdiocese of Boston.

He was a consultant or expert witness in 223 cases of clergy abuse of minors and other clergy professional malfeasance in the U.S. and Canada from 1988 until 2010.

Sipe's conclusions about Catholic clergy remained controversial until his death. In a posting on his website that he called his "last will and testament" written in 2015, Sipe was critical of church teaching on sexuality, sex outside of marriage and artificial contraception. He also reiterated that a culture exists in the church that has prevented church leaders from adequately addressing the sexual abuse crisis and that it "produces, encourages, fosters and protects a certain element among its membership who abuse -- often with impunity and rationalized as no real offense or a minor sin at most."

Born the fourth of 10 children in an observant Catholic family to Walter and Elizabeth Sipe in Robbinsdale, Minnesota, Sipe developed an interest in the church early in life. He attended the Benedictine-run high school and college at St. John's Abbey in nearby Collegeville, becoming a monk. He was ordained a priest in 1959.

In 1967, Sipe became director of family services at Seton Psychiatric Institute in Baltimore, a treatment center where bishops sent problem priests. In talking with the troubled priests, he said, some revealed they had been abused by clergymen themselves and that some church leaders had dismissed abuse reports. That led him to collect data to discern patterns of behavior.

Sipe left the priesthood in 1970 to marry Marianne Benkert, a former nun and fellow psychotherapist at the institute. They had a son, Walter, also a psychiatrist, whom Sipe leaves behind.

In a 2008 documentary for a film, "Sipe: Sex, Lies and the Priesthood," set for release this year, he said that in his first assignment he heard about priests who were sexually involved with other priests, priests who had girlfriends and priests who were involved with minors, The New York Times reported. He also learned that these men remained in good standing with the church.

That led him to ask questions about celibacy and its practice, leading to the research questions that would guide his career, according to the newspaper.

Richard took me under his wing in the last few years, encouraging me to do what he really stressed to be the important research I was doing (see https://eprints.qut.edu.au/96038/ and https://journals.equinoxpub.com/index.php/JASR/article/view/32747. Richard, I will be continuing your incredible work. Rest in Love.

Follow the links between clergy sexual misconduct with adults and sexual abuse of seminarians and how these impact the covering up of sexual abuse in the Catholic Church and you will be making the right connections and will be starting to get a clearer overall view of what has taken over the church and the hierarchy as Richard was trying to expose 20 years ago. But many tried t slander him to shut him up. That story needs to be covered as well.

God bless Richard Sipe and may he rest in peace. He was and continues to be a gift to the Church even though so many bishops seemed eager to write him off even at the end of his life. I think he's a prophet.