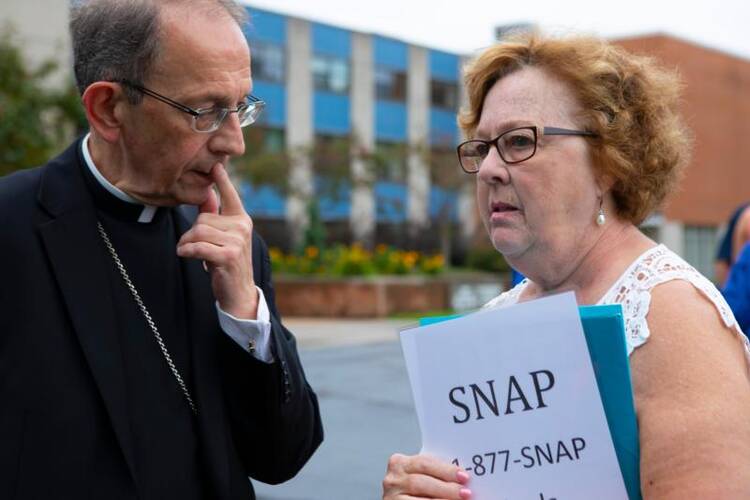 HARRISBURG, Pa. (AP) — The top-ranking Republican in the Pennsylvania Senate responded Wednesday to a sweeping grand jury report on the sexual abuse of children by Roman Catholic clergy by saying he opposes legislation to retroactively loosen time limits on lawsuits by the victims.

Senate President Pro Tempore Joe Scarnati said such a change would violate the state constitution, and although he would support amending it, that is "an extended process and has no absolute certainty."

It is a change in state law that bishops have successfully fought in recent years even as a handful of other states have opened such windows to let victims sue the church, raising the prospect of massive payouts.

Instead, Scarnati said, the church should set aside money to pay victims through a fund administered by a neutral third party to ensure fairness and objectivity.

"The church needs to establish a victim compensation fund this year, to make restitutions to its victims," Scarnati said in a statement. "Monies should also be utilized to prevent abuse from happening in the future."

A nearly 900-page state grand jury report released earlier this month said more than 300 Roman Catholic priests had abused at least a thousand children over the past seven decades in six Pennsylvania dioceses. It also accused senior church officials, including the man who is now archbishop of Washington, D.C., of systematically covering up complaints. Most cases were between 1970 and 2000.

The report has prompted fresh calls for Pennsylvania to allow people who were abused as children in the past to pursue civil claims for damages that are barred under existing law. Current law gives victims of child sexual abuse until they turn 30 to file a lawsuit.

The Senate, led by Scarnati, two years ago rejected a provision approved overwhelmingly by the state House of Representatives that restored the ability of all victims to sue, regardless of age. The proposal had been opposed by Pennsylvania's Catholic dioceses and insurers.

Many lawmakers expect the state House will in September approve a provision—recommended by the grand jury and state Attorney General Josh Shapiro—to provide a two-year window for victims to sue the church if they had been barred by a prior time limit in law.

Senate Democratic Leader Jay Costa also warned that a $250 million compensation fund that he said the Catholic Church is privately discussing is far too small.

Senate Democratic Leader Jay Costa said he supports legislation to create the two-year window and wants litigation to go through the state's courts, perhaps with specially designated judges handling the lawsuits. Questions about constitutionality should be handled by the courts, Costa said.

Costa also warned that a $250 million compensation fund that he said the Catholic Church is privately discussing is far too small. It will need to set aside much more, perhaps on the order of $1 billion, Costa said.

A compensation fund—such as one set up by New York—may save victims from the stress of going through litigation. But it also would prevent lawyers for victims from pressing the church for information about the identity of clergy who sexually abused children or helped cover it up, Hale said.

"The reality is, the church is never going to unilaterally disclose the identity of those men unless their feet are being held to the fire through litigation and the creation of a fund does not put the kind of pressure on them to disclose that kind of information," Hale said.

The Pennsylvania Catholic Conference, which speaks for all the state's dioceses, declined comment on whether it had discussed a compensation fund with Senate Republican officials or whether it continued to oppose legislation to restore the ability of victims to sue if they are now barred by time limits in the law.

A spokeswoman would only say late Wednesday the organization supports efforts to help survivors and plans to review Scarnati's proposal.

I have been so surprised that more people have not brought up the issue that Pennsylvania spent so much money digging up the past; pre-policy changes, apologies, and reparations to victims. As a victim of sexual abuse, and student of the subject, Clergy abuse is unfortunately not the largest group of abusers, yet are the most spoken of. It would be helpful if more were willing to talk about the culture and dynamics that have made abuse so prevalent, about moving forward, not merely looking back. The details of the report were unnecessarily vivid and graphic. All this leads me to ask: what was the REAL purpose of the Pennsylvania Investigation?