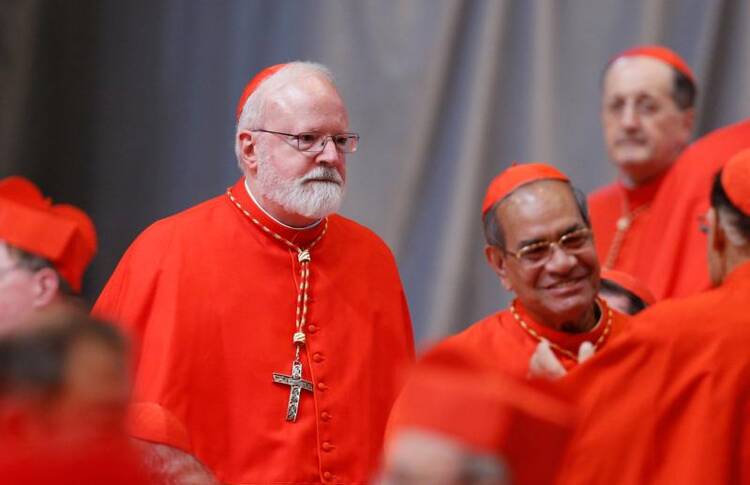 Cardinal Sean P. O'Malley of Boston, president of the Pontifical Commission for the Protection of Minors, is pictured before a consistory in St. Peter's Basilica at the Vatican June 28. (CNS photo/Paul Haring)

WASHINGTON (CNS) -- In a June 2015 letter to Boston's Cardinal Sean P. O'Malley obtained by Catholic News Service, a New York priest tells the prelate about "sexual abuse/harassment/intimidation" allegations he had heard concerning then-Cardinal Theodore E. McCarrick and asks that if the matter doesn't fall under his purview, to forward it to the "proper agency in the Vatican."

The letter "has taken me years to write and send," writes Father Boniface Ramsey, pastor of St. Joseph's Church Yorkville in New York City, who made the letter available to CNS in early August. But it was the second time he had attempted to tell church officials in writing.

In it, he describes for Cardinal O'Malley conversations with the rector of a seminary in New Jersey about trips then-Archbishop McCarrick, as head of the Archdiocese of Newark, New Jersey, would take with seminarians to a beach house.

During the time period he mentions in the letter, 1986 to 1996, he says he was teaching at Immaculate Conception Seminary at Seton Hall University in New Jersey. He writes of the accounts he'd heard of Archbishop McCarrick's repeated trips to a New Jersey beach house where, after too many seminarians were invited for too few beds, "the extra seminarian was then told that he could share the archbishop's bed."

It was the second time Father Boniface Ramsey had attempted to tell church officials in writing.

"Some of these stories were not presented to me as mere rumors but were told me by persons directly involved," he wrote.

In an Aug. 13 phone interview with CNS, Father Ramsey said he didn't know any sexual acts were taking place, "but I thought his (McCarrick's) behavior was extremely inappropriate at the least." He said he was careful about what he wrote in the letter to Cardinal O'Malley because he didn't want to be spreading rumors he'd heard, but he had concerns about the bed-sharing after hearing that it weighed on one of his friends who was tasked with finding seminarians for the archbishop's beach visits.

"I'd never heard of any adult who had sex with McCarrick," he said, but felt the constant bed sharing he'd often heard about was "something he shouldn't have been doing."

The letter dated June 17, 2015, was sent just shortly after the Pontifical Commission for the Protection of Minors, headed by Cardinal O'Malley, received its statutes in May 2015. Father Ramsey said he sent it then because he had heard of the formation of the commission and had recently been at the funeral for New York Cardinal Edward M. Egan, who died in March 2015, and saw Cardinal McCarrick there. At that point the prelate was the retired archbishop of Washington.

"I was angry," Father Ramsey told Catholic News Service. "I said 'this guy is still out and about.'"

Father Ramsey said it made him "upset" to see that Cardinal McCarrick, after "this long history which so many people knew about, he could continue to show his face."

He had written a letter about his concerns more than a decade before, in 2000, and it didn't seem to go anywhere, but his new motivation came about when he saw Cardinal McCarrick and "wanted this stuff to stop with the seminarians," he said in the interview. So, he sat down to write a letter -- again.

"The matter does not have to do with the abuse of minors, but it does have to do with a form of sexual abuse/harassment/intimidation or maybe simply high-jinks as practiced by Theodore Cardinal McCarrick with his seminarians and perhaps other young men when he was the Archbishop of Newark," writes Father Ramsey to Cardinal O'Malley.

In a July statement, Cardinal O'Malley said he did not "personally" receive the letter but the statement said "at the staff level the letter was reviewed and determined that the matters presented did not fall under the purview of the Commission or the Archdiocese of Boston..." However, the response from the cardinal's office did not say whether it had been forwarded to the proper agency, as Father Ramsey had requested.

"I never received any acknowledgement, although I have certain knowledge that the letter was received, and that the information was forwarded to somewhere in the Vatican."

In the letter to Cardinal O'Malley, Father Ramsey says that he had in the past told Archbishop Thomas C. Kelly of Louisville, who died in December 2011, about his concerns. Archbishop Kelly told him that "stories about Archbishop McCarrick had been circulating among the American bishops," the letter says, and that Archbishop Kelly mentioned to him a story involving a flight attendant.

In the interview with CNS, Father Ramsey said the story was about a male flight attendant whom Archbishop McCarrick "picked up" on a flight, telling him that perhaps he had a vocation, and ended up enrolling him in a seminary, but there seemed to be reasons other than religious for wanting him there. The flight-attendant-turned seminarian was later kicked out of the seminary.

Father Ramsey writes in the letter that after Archbishop McCarrick was appointed to the Archdiocese of Washington in 2000, he tried to speak to the apostolic nuncio in Washington, who was then Gabriel Montalvo Higuera, about what he knew. The nuncio told him to write him a letter, which Father Ramsey said he sent. He told a priest friend about the letter and that friend tried to dissuade him from sending it, telling him it could hurt him.

"I never received any acknowledgement, although I have certain knowledge that the letter was received, and that the information was forwarded to somewhere in the Vatican," he wrote Cardinal O'Malley.

"I found it shocking at the time that Archbishop McCarrick was ever advanced to the Archdiocese of Washington, since I have little doubt that many persons in the Vatican were aware of his proclivities before he was named," he wrote in the letter to Cardinal O'Malley. "And then, of course, on to the cardinalate, which was to be expected for the archbishop of Washington, but still distressing."

Mentioning cases of high-ranking officials disgraced because of sexual misbehavior, he said in the letter that "it seems bizarre to me that Cardinal McCarrick is out and about, a conspicuous presence at religious (including papal) events, being interviewed, giving speeches, serving on committees and the like. Was not what he did at the very least highly questionable? Was it not taking advantage of young men who did not know how to say no to their archbishop? Has it not, for the many laity and clergy who were aware of his actions, contributed to cynicism about the church and the hierarchy?"

Father Ramsey said he did not keep a letter of the one sent in 2000 to the nuncio, but in between the first and the second letter he sent, he said tried to speak with others, including Cardinal Egan, about stopping then-Archbishop McCarrick.

"He (Cardinal Egan) didn't want to hear about it," Father Ramsey said to CNS.

What a good message that they have sent to all people. It was a good event at our state. I saw a press release from https://paperleaf.ca/do-my-essay/ and find it a bit useful for me. So, I have decided to grab my stuff and for the event. And I gonna say that it was really good. I have learned a lot of information about that.