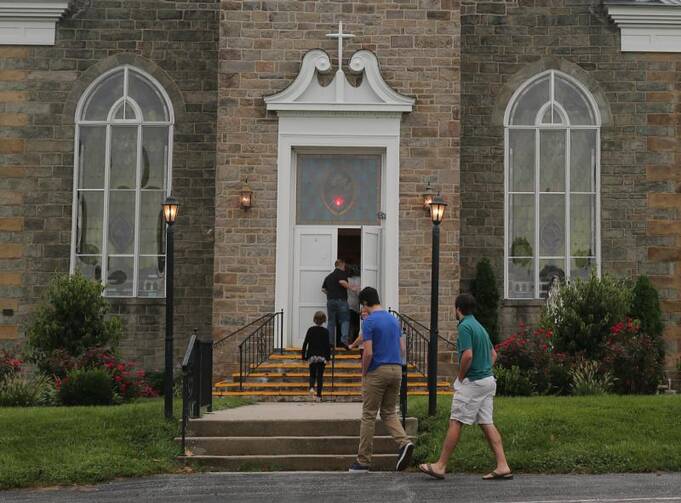 Massgoers enter Immaculate Heart of Mary Church Aug. 19 in Abbottstown, Pa., which is in the Diocese of Harrisburg. (CNS photo/Bob Roller)

WASHINGTON (CNS) -- Sexual assault victims say they were hurt not only by individual priests, but by church officials and ordinary Catholics who treated them with intolerance and indifference.

Four survivors of sexual assaults by priests shared their stories with Catholic News Service. They are: Jim VanSickle and Mike McDonnell of Pennsylvania, Michael Norris of Houston and Judy Larson of Utah.

Many of them have not been to a Catholic church in years. They say the atmosphere of their former parishes created breeding grounds for abuse due to the hardhearted attitudes of diocesan officials, staff and ordinary churchgoers.

"Being raised Catholic, I remember -- you don't speak out against your own church," said VanSickle. "Nobody's going to listen to you."

A crisis that is far from over: how the church can respond to sexual abuse
The Editors

Dear Catholic bishops: This is not the time to play defense
Katie Prejean McGrady

Most of them belonged to extremely traditional parishes and were attacked as vulnerable children. Their view of Catholicism changed when fellow believers showed them no compassion and acted to protect selfish interests.

"I've known others that came forward. They were ridiculed and ostracized -- even by their own family members," said VanSickle, 55. He stood next to Attorney General Josh Shapiro when grand jury findings were released to the public Aug. 14. He had suffered silently for 37 years after being sexually abused by a priest at age 16.

"We lived in a neighborhood where most of the people in the subdivision were Catholic. Everything in our lives revolved around the church," said Larson, who is now retired and in her 70s. "To be in that kind of environment and try to say something horrible happened to you, by a person everybody thinks is a god on earth, you're all alone."

The abuses these survivors suffered at the hands of priests were not crimes of passion, they said, but cold exploitations of control. Most victims were not aware that their attackers were serial abusers. Each felt alone when he or she was victimized.

"I think it's opportunistic," said VanSickle. "I feel like I was targeted."

"It's a lifelong impact. I deal with it every single day," said Norris, a chemical engineer. He said he was abused by a priest in Louisville, Kentucky, at age 10. After many years of struggle, he revealed the truth to his devout parents at a point when he "couldn't take it anymore."

When he acted to report the abuse, he and his family members were mistreated by fellow Catholics in the archdiocese.

"They discredited me," he said. "Probably the biggest disappointment in my life was how the church responded to my accusations. Maybe I was naive, but I expected them to believe my story and take action. When they didn't do what I saw as morally right, I became more disillusioned with their teachings."

Survivors also faced a stigma caused by sexual assault. The victims were molested at an age when they did not know about sex. Confused, they realized what happened when they grew up. Feeling disgust, anger and shame, they feared hostile reactions from their traditional communities.

"When I was growing up, we were told, 'It would be better for you to die than lose your virtue.' This was told to me in fourth grade," said Larson. "I didn't know what 'lose your virtue' meant."

She was raped by a priest one year later at age 10. After realizing the truth as an adult, she did not tell her parents. She knew they would not listen, since it was taboo to speak ill of a priest or nun in their presence.

"Probably the biggest disappointment in my life was how the church responded to my accusations. Maybe I was naive, but I expected them to believe my story and take action. When they didn't do what I saw as morally right, I became more disillusioned with their teachings."

Some Catholics viewed sex as scandalous and treated victims as if they were contaminated.

The survivors are disillusioned with the way church officials handle abuse cases. This disillusionment has affected their personal beliefs.

Norris is no longer Christian. "I personally can't set foot in another church because of what's happened and the way I was treated," he said.

Larson hasn't been inside a church in over 50 years. "For a lot of us, going to church is a triggering experience. It's re-traumatizing to victims," she said.

VanSickle said he has strong belief in Jesus and has become a Christian. His family members are Catholic. He welcomes interactions with Catholics and wishes to be reconciled with the church, but wants the institution to change first.

"To be away from the Eucharist in my life is a hard thing to deal with because of my belief as a Catholic," he said. "But I can't reconcile myself with the church until I see change."

They feel sorry for Catholics who are struggling with their beliefs in light of the recent grand jury report. Norris and VanSickle say they do not wish for Catholics to lose their faith.

Despite the pain caused by recent revelations, they hope change will result.

"It reopens a wound from the past for me as a survivor. But I'm also extremely happy that this information is coming to light," said McDonnell, a specialist at a drug and alcohol treatment facility in Philadelphia, regarding the recent grand jury report. "It is vindication and validation for many survivors and victims."

He believes the church needs to stop withholding information about abuse and be honest with the public. "It will invite people back to the Catholic Church once they see that the church is not just publicly making a statement that 'we're sorry,'" he said.

As the church hierarchy considers change, Catholics can make simple changes in their homes and parishes. According to Larson, the average age for a clergy sexual abuse victim to come forward is 42. As child victims grow into adults, they begin to realize what happened to them -- and fall silent due to religious and social pressures. Ordinary Catholics can solve this problem, she said, by treating others around them with openheartedness instead of moral superiority.

"Be compassionate," said Larson, sharing her advice to families coping with revelations of abuse. "Believe your family member. They're in pain. And they've held this terrible secret for many, many years because of their fear of your reaction when they tell you."

One of the hardest things McDonnell experienced in his life was the shattering effect of the abuse on his parents. They did not find out about it until they were much older. One of the last things his father expressed on his deathbed was sorrow for what happened.

"Believe your family member. They're in pain. And they've held this terrible secret for many, many years because of their fear of your reaction when they tell you."

VanSickle said a family's first responsibility is to love and believe a child who speaks out about sexual abuse by clergy.

"They need to wrap their arms around that kid and make them feel safe. That never happened for me," he said. "You need to hug and protect your child first. Deal with the church after."

McDonnell said victims recover with support from others, including fellow survivors.

"Part of the healing process is coming forward. I'm only as sick as my secrets," he added. "Talk to somebody."

Sure, like the problem is all about "traditional Catholics" lacking compassion. Baloney. What were all the progressive Catholics doing when seminaries were recruiting seminarians in the sixties and seventies by advertising in pornography magazines. I know exactly where they were. They were giggling and applauding their approval.

In the few conversations I have had with Catholics about sexual predation in the church, I have been surprised at how tolerant ordinary Catholics are of predatory behavior by those in religious life.

THIS. THIS is what Francis should have called for - not prayer and penance in vague terms by the laity, but, by the whole church, prayer and penance through concrete acts of compassion for survivors: listen to them, respond to their needs, let reforms be guided by survivors working with others. Whatever we do to and for the least of these...