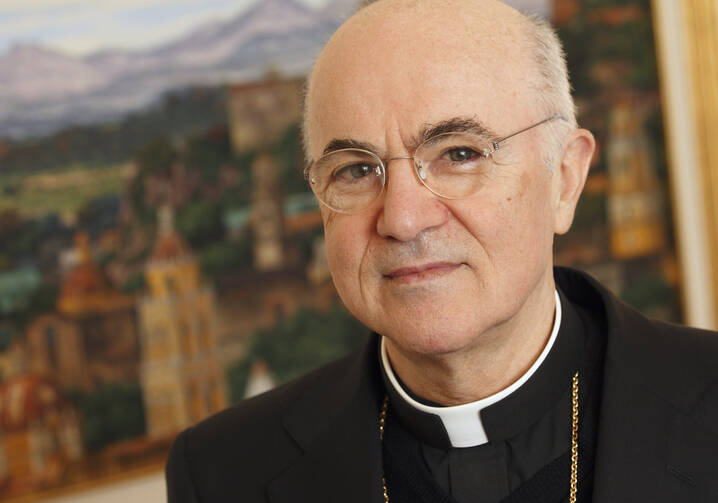 Italian Archbishop Carlo Maria Vigano, the apostolic nuncio to the United States, is pictured at his residence at the Vatican in this Oct. 20, 2011, file photo. (CNS photo/Paul Haring)

ROME (AP) — An Italian journalist who says he helped a former Vatican diplomat pen his bombshell allegation of sex abuse cover-up against Pope Francis says he persuaded the archbishop to go public after the U.S. church was thrown into turmoil by sex abuse revelations in the Pennsylvania grand jury report.

Tosatti, a leading conservative critic of Francis, told The Associated Press that Vigano had called him a few weeks ago out of the blue asking to meet, and then proceeded to tell him the information that became the basis of the testimony.

Vigano's document alleges that Francis knew of ex-Cardinal Theodore McCarrick's sexual misconduct starting in 2013 but rehabilitated him from sanctions that Pope Benedict XVI had imposed. The claims have shaken Francis' five-year papacy.

Vigano called for Francis to resign over what he said was complicity in covering-up McCarrick's crimes. There is ample evidence, however, that the Vatican under Benedict and St. John Paul II also covered up that information, and that any sanctions Benedict imposed were never enforced.

Vigano has kept largely quiet since the bombshell testimony Sunday, and his whereabouts are unknown. As a result, Tosatti's reconstruction provides the only insight into how the document came about.

Tosatti, a longtime correspondent for Italian daily La Stampa but who now writes largely for more conservative blogs, said after their initial meeting a few weeks ago, Vigano wasn't prepared to go public.

Viganò has kept largely quiet since the bombshell testimony Sunday, and his whereabouts are unknown.

But Tosatti said he called him after the Pennsylvania grand jury report published Aug. 15 alleged some 300 priests in six Pennsylvania dioceses abused more than 1,000 children over the past 70 years, and that a sequence of bishops had covered it up.

Tosatti said he told Vigano: "I think that if you want to say something, now is the moment, because everything is going upside-down in the United States. He said 'OK.'"

The two then met at Tosatti's Rome apartment.

"He had prepared some kind of a draft of a document and he sat here by my side," Tosatti told the AP from behind his desk, pointing to the wooden chair to his right. "I told him that we had to work on it really because it was not in a journalistic style."

Tosatti said he told Vigano: “I think that if you want to say something, now is the moment.”

Tosatti said he persuaded Vigano to cut claims that couldn't be substantiated or documented "because it had to be absolutely water-proof." They worked for three hours.

Tosatti said he was well aware of the implications of the document and what it took for a Holy See diplomat to reveal secrets he had kept for years.

"They are brought up to die silent," Tosatti said of Holy See diplomats. "So what he was doing, what he was going to do, was something absolutely against his nature."

But he said Vigano felt compelled to publish out of a sense of duty to the Catholic Church and to clear his conscience.

"He enjoys a good health but 77 is an age where you start preparing yourself ... he couldn't have a clear conscience unless he spoke," Tosatti said.

Tosatti said he persuaded Vigano to cut claims that couldn't be substantiated or documented.

Document in hand, Tosatti then set out to find publications willing to publish it in its entirety: the small Italian daily La Verita, the English-language National Catholic Register and LifeSiteNews, and the Spanish online site InfoVaticana.

All are ultra-conservative media that have been highly critical of Francis' mercy-over-morals papacy.

The English and Spanish publications translated the Italian document and all agreed on a Sunday morning embargo, coinciding with the second and final day of Francis' trip to Ireland, where the Catholic church's sex abuse and cover-up scandal dominated his trip.

Tosatti said Vigano didn't tell him where he was going after the article came out, knowing that the world's media would be clamoring to speak with him.

As Tosatti accompanied Vigano to his door, he bent down to kiss Vigano's ring — a sign of respect for Catholic bishops.

The circle is now complete. Mario Puzo would be proud while Our Lord Jesus Christ “may they all be one” is crucified yet again and again and again, thanks to Vigano and conservative animus.

What will Vigano do now for a follow up? Stay tuned. The gay drama is only beginning.
Cue the soundtrack for The Godfather

They have been hatching their plans for a while now ... it is time for Francis to act decisively and ruthlessly, to clean out the Augean stables ...

"In April this year, Vigano attended a conservative conference, entitled “the limits of papal authority”, where Burke was the main speaker. Tosatti was also there. Some conference participants openly referred to Francis as the precursor of the coming of the anti-Christ and the end of the world. The conference agreed to a declaration saying “a grave danger to the faith and the unity of the Church” had emerged under Francis." https://www.reuters.com/article/us-pope-abuse-escalation/defenders-rally-around-pope-fear-conservatives-escalating-war-idUSKCN1LD27Y

The modern-day ultraconservative Pharisees are at work extremely hard these days! They would stop at anything according to the Gospels!

Or they aren’t blind to what is very obvious. Take your pick.

“…Vigano has kept largely quiet since the bombshell testimony Sunday, and his whereabouts are unknown…”. The only guy who spoke is a rank and file anti-Francis journalist who helped Vigano pen the letter. This is exactly why the Pope told us that we should read the letter and discern it by ourselves. Eventually, he may have some words. He is such a wise and courageous person. In the other hand, Vigano looks more and more like a pitiful coward.

“Vigano looks more and more like a pitiful coward“

or he is exhibiting self-loathing inner-homophobia. As a gay man I have seen it in innumerable “straight” men. So to quote the il-LUST-rious “Paige Smyth”, take your pick

Conservatives are showing us that relativism lives in them...cherry picking on steroids

Just what is it the anti-Vigano comments here are out to prove? It seems the damning evidence against the highest level of the hierarchy is available for all to see.

Open your eyes. Vigano peddles in fear mongering, broken vows and ideologies, none of which are terribly holy never mind Catholic.

Cardinal Wuerl has categorically denied that any of this information was communicated to him.

Archbishop Viganò at no time provided Cardinal Wuerl any information about an alleged document from Pope Benedict XVI with directives of any sort from Rome regarding Archbishop McCarrick.

Archbishop Viganò has not produced in his testimony any objectively verifiable proof that he in any way communicated to Cardinal Wuerl restrictions imposed on Cardinal McCarrick by Pope Benedict XVI. In fact, Archbishop Viganò’s testimony says that he did not.

Cardinal Wuerl has indicated that during his entire tenure as Archbishop of Washington no one has come forward to say to him, “Cardinal McCarrick abused me” or made any other like claim. The only ground for Cardinal Wuerl to challenge the ministry of Archbishop McCarrick would have been information from Archbishop Viganò or other communications from the Holy See. Such information was never provided.

Perhaps the starting point for a serene and objective review of this testimony is the inclusion of Archbishop Viganò’s tenure as Apostolic Nuncio to the United States in the mandate of the Apostolic Visitation already called for by Cardinal Daniel DiNardo, President of the United States Conference of Catholic Bishops.“
https://adw.org/news/statement-regarding-archbishop-viganos-testimony/

"Pope Benedict has not commented on the 'memorandum' of Archbishop [Carlo] Viganò and will not do so," Archbishop Georg Gänswein told the German Die Tagespost newspaper Aug. 28."

"Pope Francis Among the Wolves" by Marco Politi (2014) , a leading expert on the Vatican outlines how a cadre of ultraconservative Vatican insiders have worked by any means possible to harm the current Vicar of Christ, Pope Francis. When his Cardinal Bergoglio chose the name
Francis much was made of his care for the poor and for creation; however, Christ's admonition to St Francis was forgotten" Rebuild my Church!:. St Francis was a reformer who came at a time of deep corruption in the Church and was able to heal the Church from within. Pope Francis is here by God's Grace to save us now. Already he has cleaned up the Vatican Bank which was a largest money laundering bank in the world. There are many evil forces at work to block him. We should all be praying for his victory over his enemies who stoop to lying in order to discredit him.

The argument from several in this combox seems to be "Vigano is a conservative, with conservative friends and allies, so we should not investigate his charges." What is one supposed to do. just forget them, brush them under the rug? Pope Francis deserves better defenders than head-in-the-sand blind loyalty. Disprove the charges, not the person! That is what he asked the reporters to do. Ask Cardinal Tobin if he ever knew of the McCarrick settlements in his diocese before he was sent there (He only says he was unaware of the abuses of minors). Ask him why he told his priests not to talk to reporters. I think he could be proven innocent. Bishop McElroy had meetings with Richard Sipe. Did he hear about McCarrick? Same with Cupich. But, they cannot hide behind vague statements.

You must consider the source of these "charges". Vigano was demoted because he was too deeply entrenched in the American culture wars. None of these "charges" have been backed up with solid proof. It smells more of calumny than fact. I like the fact that Pope Francis (Vicar of Christ) is not dignifying these baseless claims with a response. His Holiness has requested real journalists to use their journalistic skills to investigate the "charges". This particular Italian "journalist" has violated journalistic standards and ethics by actually co-writing Vigano's statement.