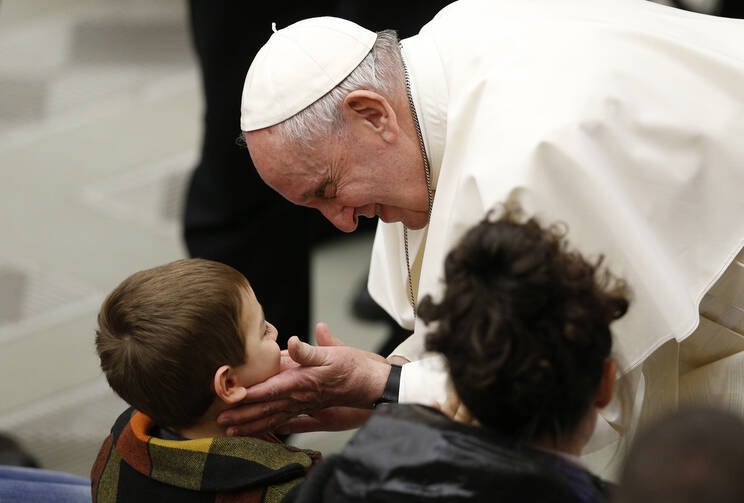 Pope Francis greets a boy as he meets the sick and disabled during his general audience in Paul VI hall at the Vatican Feb. 20, 2019. (CNS photo/Paul Haring)

Friday, March 13, marks the seventh anniversary of the Francis papacy. Over the last seven years, Pope Francis has introduced and popularized memorable phrases meant to inspire the church. His call to build a “revolution of tenderness” reminds us that mercy is who God is and what God wants for and from God’s people (“Evangelii Gaudium,” No. 88). Francis has called on all people of goodwill to create a “culture of encounter” (No. 220) that resists the modern “throwaway culture” (“Laudato Si’,” No. 22), affirms human dignity and promotes the global common good.

But for all his pithy lines, Francis’ papacy has been uniquely characterized by powerful gestures and actions that comprise a pedagogy of mercy. Reflecting Jesus’ teaching and healing ministry, Francis teaches through a number of richly symbolic pastoral actions. Here are five examples for our reflection, discernment and emulation.

Pope Francis’ chosen name indicates his commitment to humility and simplicity, as well as his special concern for the poor and the planet. Upon his election as pope, Jorge Mario Bergoglio decided to take the name “Francis” following an embrace with his friend, the Brazilian Cardinal Cláudio Hummes, who insisted, “Don’t forget the poor.” During his introduction at St. Peter’s Square, Francis broke with tradition by asking the 150,000 people gathered to pray for him before offering his first blessing as pope.

Pope Francis’ chosen name indicates his commitment to humility and simplicity, as well as his special concern for the poor and the planet.

When he was introduced to his brother cardinals, Francis refused to use a platform to elevate himself over them. Francis chooses to live in a small suite in the Vatican guesthouse rather than the apostolic palace. He gets around the Vatican in a Ford Focus and often uses a Fiat for his international tours instead of an extravagant limousine or gas-guzzling S.U.V.

On his first Holy Thursday as pope, Francis washed the feet of 12 criminal offenders, including two women and a Muslim. This humble gesture—perhaps more than any homily or pastoral letter—brought John 13 to life. With these tender actions, Francis shows us what it means to heed Jesus’ command, “Just as I have loved you, you also should love one another” (Jn 13:34).

Francis’ default setting is to include and encourage rather than exclude and condemn. In his weekly appointments, he schedules time to meet with bishops who have been publicly critical of his leadership—not to rebuke them but to dialogue together. Francis continues to meet with survivors of clergy sexual abuse and their relatives as part of his personal commitment to lament and atone for the church’s failure to protect children and vulnerable adults.

Pope Francis’ default setting is to include and encourage rather than exclude and condemn.

He has expressed his intention to include more women in decision-making roles, demonstrated by the appointment of Francesca Di Giovanni to a senior role in the Secretariat of State earlier this year. Francis has modeled inclusion through his warm embrace of individuals disfigured by disease, people with special needs and young children; his birthday parties include hospital patients and people experiencing homelessness. In his 2015 visit to the United States, he spent his last day with 100 inmates at a Philadelphia detention center, calling on all citizens to facilitate rehabilitation and reentry of incarcerated people.

Jesus’ contemporaries sometimes recoiled at the way he ate with sinners and outcasts. When Jesus invites himself to stay at Zacchaeus’s house, the crowd grumbles in disapproval (Lk 19:2-10). Just as Jesus reached out to even those considered insignificant and unworthy, Francis extends God’s welcome to all.

Pope Francis’ enduring legacy may sprout from a number of synods that have created the conditions for a “Church that listens more” (“Christus Vivit,” No. 41). As evidenced by the synodal gatherings to discuss marriage and family life (2015 and 2016), young people and vocation (2018), and the Pan-Amazon region (2019), Francis shows that inclusion is not mere tokenism but a pathway for a “revival of hope” (“Querida Amazonía,” No. 38) through dialogue, discernment and collaboration for courageous action. “Synod” means “journeying together,” a commitment to accompany, consult and to empower each other in fully conscious and active participation in being church together. Francis shows us that we should not be afraid of disagreement; his example in listening resists hegemonic beliefs and structures that enable clericalism and hierarchicalism.

This pope has also prioritized ecumenical and interfaith dialogue; his collaboration with bishops, patriarchs, rabbis and imams demonstrate his commitment to build bridges rather than walls, to practice a “culture of encounter” for peace and solidarity. Francis’ willingness to reach beyond an “us versus them” tribalism reflects Jesus’ interactions with Gentiles, like the Syrophoenician woman who begs him to cast the demon out of her daughter. Jesus initially rebuffs her request, but her faith perseveres, and her daughter is healed (Mk 7:24-30).

Like Jesus, Francis shows us that listening to others—and especially those considered other—can help us become more attentive and responsive to the presence and power of God in people and places we might not expect.

When asked, “Who is Jorge Mario Bergoglio?” Francis replied: “I am a sinner. This is the most accurate definition. It is not a figure of speech, a literary genre. I am a sinner.” Francis reveals someone in touch with God-who-is-mercy. Pictures often surface of Francis receiving the sacrament of reconciliation; his commitment to go to confession every two weeks reinforces his claim that “God never tires of forgiving us.”

As part of his travels around the world, Francis has also made emotional appeals for forgiveness for past and present neglect and abuse in the church, as he did in Mexico in 2016, Bangladesh in 2017, Ireland in 2018 and Romania in 2019.

As St. Ignatius insists—and Pope Francis displays—love is better shown in deeds than in words.

Francis has not shied away from asking for forgiveness for his own shortcomings. Memorably, on New Year’s Eve, a woman grabbed his hand and tugged his arm. Pope Francis responded by slapping her hand, and the next day issued a personal apology for losing his patience and setting a bad example.

Francis’ contrition reminds us that the church is—to borrow a phrase from Thomas Merton—“a body of broken bones.” The first steps toward hope and healing require lamentation and repentance. By his words and deeds, Francis echoes what Jesus taught: “Do not judge, so that you may not be judged...the measure you give will be the measure you get” (Mt 7:1-2).

Pope Francis’ first visit outside of Rome was to the island of Lampedusa in July 2013, where he sought to bring attention to the plight of migrants and refugees that make the Mediterranean Sea a “vast cemetery.” His first international trip came just a couple weeks later, to Rio de Janeiro in Brazil for World Youth Day, where he spent some of his time talking and praying with residents of a favela (slum).

A creature of habit, dealing with the aches and pains of old age, Francis did not intend to travel much as pope. But his conscience called on him to provide a ministry of presence to people who have been pushed to the peripheries of status, privilege and power. In this example of “downward mobility,” as Dean Brackley, S.J., called it, Francis calls on us to shatter the idols of security, status and comfort.

In his words and actions, Pope Francis teaches us that love of God and neighbor should orbit around humility, inclusion, listening, forgiveness and being present.

The etymology of mercy (from the Latin, misericordia), is having a heart by and with those who are wretched, the suffering. Francis shows us that to be merciful, we must draw near those who suffer, contemplate their faces and enter into relationship with them as real persons, not generic categories of people we call the “poor,” “hungry,” “stranger” or “sick.” At Lampedusa, Francis denounced the “globalization of indifference” toward the desperation and injustice facing so many of our brothers and sisters. Instead, he urged, we need to “go and do likewise” as the Samaritan who enters the ditch and cares for the one left for dead.

Diverting from the path we are on and taking up the vantage point of the vulnerable and marginalized is a crucial way to overcome distrust and division; this is what it means to be an ambassador of the “culture of encounter.” Francis modeled this kind of encounter in February 2016, when celebrating Mass along the U.S.-Mexico border. In this liturgy Francis showed us that the people of God cannot be divided between the residents of Ciudad Juárez and El Paso: We are one body in Christ. Jesus warns that nations will be judged by what we do for the least among us (Mt 25:40). Francis teaches us that we cannot help the needy unless and until we draw near them, share our lives with them and help them become agents of their own future.

In his words and actions, Pope Francis teaches us that love of God and neighbor should orbit around humility, inclusion, listening, forgiveness and being present, especially to those who question if they matter or belong. In the face of so many distractions and reasons for despair, Francis shows us that our physical presence matters. After all, we incarnate God’s love in the world as we are, where we are. As St. Ignatius insists—and Pope Francis displays—love is better shown in deeds than in words. 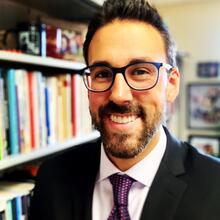 Marcus Mescher is assistant professor of Christian ethics at Xavier University in Cincinnati, Ohio. He is a three-time Jesuit school alum (Marquette University High School, Marquette University and Boston College) and the author of The Ethics of Encounter: Christian Neighbor Love as a Practice of Solidarity, recently published by Orbis Books.

@marcusmescher
Show Comments ()
Join the conversation: Login or create an account
Before you can comment, you need to update your profile to include your first and last name, as required in our comments policy. Then reload this page and you'll be set up for commenting. Update your profile
Show Comments ()
Comments are automatically closed two weeks after an article's initial publication. See our comments policy for more.