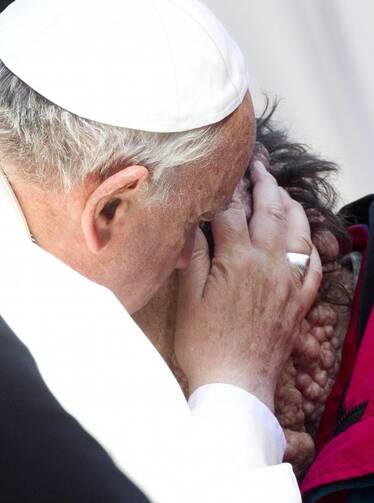 I could barely look at the photos, but I knew that I must.

Photos of the Pope hugging a man whose face was blanketed with tumors struck a deep chord in people across the world. When I posted them to my public Facebook page, I received almost 300 comments in the space of a day.

Why do these photos speak to so many people so profoundly? Let me suggest three reasons.

For the Christian, the image of the Pope’s embrace calls up memories of the man whose name Archbishop Jorge Mario Bergoglio chose after his election as Pope: St. Francis of Assisi.

As a young man, riding his horse one day outside of Assisi, Francis came upon a leper, a person suffering from one of the many skin diseases common in the early 13th century. From childhood Francis had had a horror of lepers. Yet because of an earlier dream in which God had asked Francis to change his life, the formerly dissolute youth saw that something new was being asked of him. He dismounted his horse, pressed a coin into the leper’s hand and kissed him. When he jumped back on his horse and turned to wave farewell, Francis saw that the leper had disappeared – legend has it that it was Christ.

It was a turning point in the life of Francis of Assisi; from then on he would devote himself to the poor and marginalized. He had embraced, to use Mother Teresa’s famous expression, “Christ in distressing disguise.”

The Pope has done the same; Christians recognize this on a deep level.

More broadly, the Pope’s embrace recalls images of Jesus’ healing of lepers, again a blanket term for a variety of skin diseases common in first-century Judea and Galilee....

James Martin, S.J.
@jamesmartinsj
Show Comments (
1
)
Comments are automatically closed two weeks after an article's initial publication. See our comments policy for more.
Carolyn Disco
8 years 9 months ago
Speaking of skin diseases, I think also of those suffering from Epidermolysis Bullosa or EB, as this 11-year old boy on Staten Island does: http://www.thedoctorstv.com/main/content/Butterfly_Skin Children with EB are often confronted with hurtful remarks because of their disfigurement and disabilities. May Pope Francis' embrace envelope them and their families with that same love so powerfully presented here.