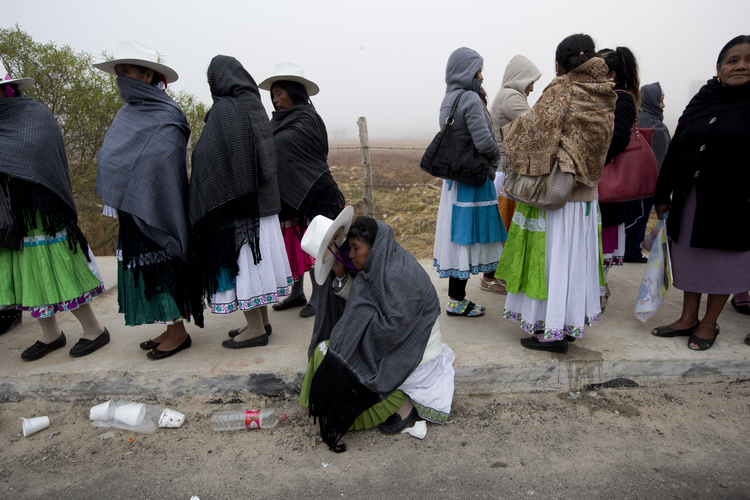 Pope Francis is celebrating Mexico's Indians on Monday with a visit to Chiapas state, a center of indigenous culture, where he will preside over a Mass in three native languages thanks to a new Vatican decree approving their use in liturgy.

But the visit, at the midway mark of Francis' five-day trip to Mexico, is also aimed at boosting the faith in the least Catholic state in Mexico.

History's first Latin American pope has already issued a sweeping apology for the Catholic Church's colonial-era crimes against the continent's indigenous. On Monday, he'll go further by celebrating their culture in ways the local church hierarchy has often sought to play down, in a clear demonstration of his belief that Indians have an important role to play in Mexico today.

"I ask you to show singular tenderness in the way you regard indigenous peoples and their fascinating but not infrequently decimated cultures," Francis told Mexico's bishops Saturday in a speech outlining their marching orders. "The indigenous people of Mexico still await true recognition of the richness of their contribution and the fruitfulness of their presence."

The Mexican hierarchy has long bristled at the region's "Indian church," a mixture of Catholicism and indigenous culture that includes pine boughs, eggs and references to "God the Father and Mother" in services. It was a tradition that was embraced by the late bishop of San Cristobal de las Casas, Samuel Ruiz, who ran afoul of both the Mexican church and the Vatican at times for his use of the local ways.

Worshippers began filing into the site of Monday's Mass shortly after midnight. It will include readings, prayers and hymns in the three main indigenous languages of Chiapas: Tzeltal, Tzotzil and Chol, which are spoken by just over 1 million people, according to Mexico's latest census. The Vatican has said the pope would present the official decree authorizing the languages to be used, some 50 years after the Second Vatican Council paved the way for Mass to be celebrated in the vernacular rather than in Latin.

"Vatican II in liturgy finally comes to Chiapas," said the Rev. Manuel Dorantes, an assistant Vatican spokesman who is from Mexico.

Despite the pope's overture, residents of Chiapas said they believe Francis is coming mostly to confirm their faith, not their status as indigenous.

"It doesn't matter that I'm indigenous; I think it's more that I'm Catholic," said Emanuel Gomez, a 22-year-old Tzotzil who planned to attend the Mass. "The pope comes to encourage our hearts and faith as Catholics."

He added, though, that the visit would "lift us up so we don't feel scorned by the powerful and rich."

Francis has insisted that his is a "poor church, for the poor," and was expected to address the problems of poverty and marginalization Monday. After the Mass, Francis was scheduled to hear testimony from a handful of Chiapas families about the hardships they face.

"He comes to redeem an entire struggle by the people," said the Rev. Marcelino Perez, an indigenous priest who will translate the pope's homily into Tzotzil during the Mass.

Francis' visit comes amid strong challenges to the church in the southern state, including huge inroads by evangelical Protestants who have helped turn Chiapas into the least Catholic and one of the most Protestant and evangelical in Mexico. According to the 2010 census, Chiapas was 58 percent Catholic, compared to a national average of 83 percent.

Relations between the two groups haven't always been smooth.

In some communities, residents have expelled or ostracized any inhabitant who converts to Protestantism, often taking their lands or possessions, or denying them access to basic services like water or electricity.

Francis has close personal friendships in the evangelical and Protestant communities, but it was unclear how he might tackle the Protestant-Catholic divide in Chiapas.

San Cristobal is home to two of the most famed religious defenders of indigenous people in Mexican history: Bishops Bartolome de las Casas in the 16th century and Samuel Ruiz, who died in 2011.

Both were beloved by indigenous people and widely reviled among the wealthy classes and much of the church hierarchy. Many officials accused Ruiz of acting on behalf of the Zapatista rebels in their 1994 uprising for greater indigenous rights.

Part of the liberation theology movement that swept Latin America after Vatican II, Ruiz tried to fend off the rapid growth of Protestant denominations by adapting to indigenous customs.

One of his controversial measures was to rely heavily on married male lay workers because local culture granted more respect to men with children than to childless, celibate men such as priests. Some in the church worried the married deacons were taking on priestly functions.

In 2002, under Pope John Paul II, the Vatican asked the Chiapas diocese to halt deacon ordinations. But under Francis, the ordinations were renewed in 2014.

In a sign that Ruiz remains a controversial figure, the Vatican declined to say whether Francis would pray at his tomb during his visit to the cathedral Monday.

"There are many who feel he was more of a political figure than a religious one, often disregarding that the motivation for all that he did was Jesus Christ," Dorantes said.