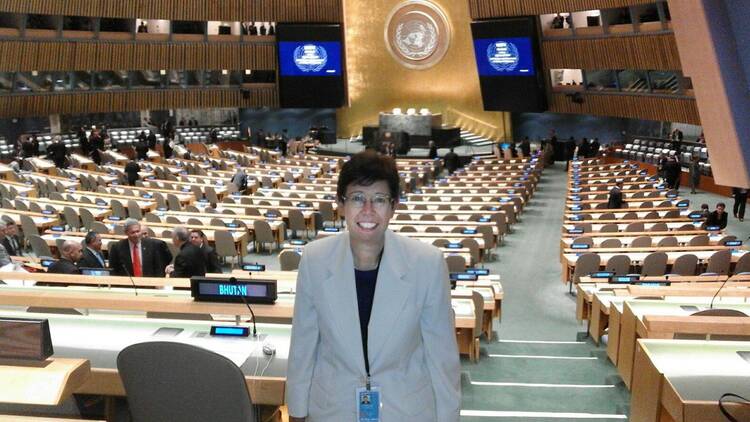 For the first time in history, Pope Francis has appointed a woman to a senior managerial position in the Vatican’s Secretariat of State. He has named Francesca Di Giovanni, an Italian lay woman, to be the second undersecretary of the secretariat’s Section for the Relations with States, with specific responsibility for the multilateral sector, which deals with intergovernmental organizations at the international level and the network of international treaties.

Born in Palermo, Sicily, in 1953, Ms. Di Giovanni graduated with a degree in law and worked as a notary in the administrative-juridical sector of the International Center of the Opera di Maria (Work of Mary) of the Focolari Movement, of which she is a member. She has worked as an official in the Section for Relations with States of the Secretariat of State since September 1993, the Vatican said when it announced her appointment on Jan. 15.

She has worked in the multilateral sector for the past 27 years, particularly on themes relating to migrants and refugees, international humanitarian law, communications, international private law, the condition of women, intellectual property and tourism.

The pope has named Francesca Di Giovanni, an Italian lay woman, to be the second undersecretary of the secretariat’s Section for the Relations with States.

This appointment opens up new horizons for women in the Vatican. The Section for Relations with States, which is headed by the English-born archbishop Paul Gallagher and has a staff of 55 persons, including 12 women, now has two undersecretaries: Ms. Di Giovanni and the Polish-born monsignor Miroslav Wachowski, who is principally responsible for the sector of bilateral diplomacy.

Ms. Di Giovanni, who speaks English as well as Italian, told Vatican News and L’Osservatore Romano, the Vatican daily, that she was “absolutely surprised” by Pope Francis’ decision to appoint her, but she noted that for several years now there had been discussion of the need to have an undersecretary for the highly sensitive multilateral sector, which differs in various ways from the bilateral sector. She described it as “a new role” and said she hopes to respond fully to “the trust” the pope has put in her by working in harmony with the group that she has been a part of for many years.

Explaining the work of the multilateral sector in the Section for Relations with States, Ms. Di Giovanni said, “It deals with relations relating to the intergovernmental organizations at the international level,” which include organizations like the United Nations, the World Health Organization, the International Telecommunications Union and the International Monetary Fund. It also involves work “on the network of multilateral treaties,” which “are important because they express the political will of states regarding various themes relating to the international common good,” including “development, the environment, the protection of victims of conflicts, the condition of women and so on.”

Ms. Di Giovanni told the Vatican media, “The Holy Father has taken an innovative decision, certainly, which—beyond my person—represents a sign of attention toward women.”

Commenting on the fact that she is the first woman ever to have such a senior role in the Vatican’s Secretariat of State, Ms. Di Giovanni told the Vatican media, “The Holy Father has taken an innovative decision, certainly, which—beyond my person—represents a sign of attention toward women.” But, she said, “the responsibility is linked to the task rather than to the fact that I am a woman.”

At the same time, she recalled that Pope Francis in his homily for the World Day of Peace on Jan. 1 of this year declared: “Women are givers and mediators of peace and should be fully included in decision-making processes. Because when women can share their gifts, the world finds itself more united, more peaceful.” Ms. Di Giovanni added, “I would like to contribute so that this vision of the Holy Father may be realized, together with the other colleagues who work in this sector of the Secretariat of State, but also with other women—and they are many—who work to build fraternity also in this international dimension.”

She underlined “the important attention” that Pope Francis gives to the multilateral sector and multilateral diplomacy, “which today is called into question by many but which has a fundamental function in the international community.” She believes that “a woman can have certain attitudes for finding common points and for caring for relations having at [their] heart unity.”

Ms. Di Giovanni said she hopes that “my being a woman can reflect positively on this task” while at the same time recognizing that her male colleagues have similar gifts. She concluded, “We must never tire of fostering dialogue at all levels, always seeking diplomatic solutions.”