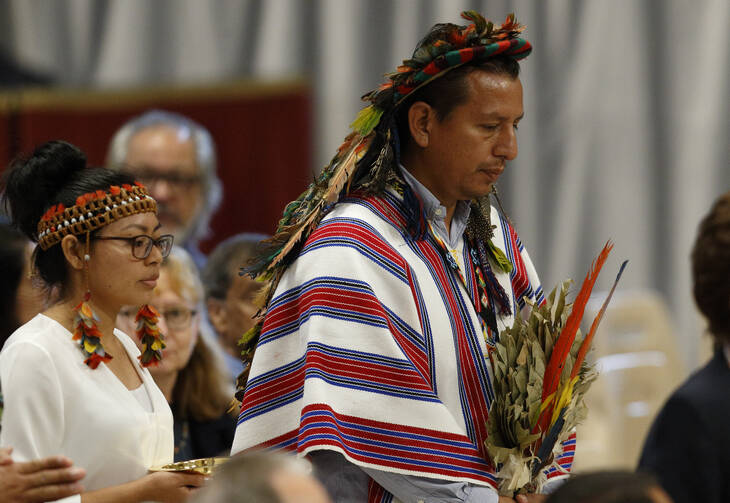 Indigenous people carry offertory gifts as Pope Francis celebrates the concluding Mass of the Synod of Bishops for the Amazon at the Vatican on Oct. 27, 2019. (CNS photo/Paul Haring)

Pope Francis has just issued an important document entitled “Querida Amazonia,” or “Beloved Amazon.” It is a post-synodal apostolic exhortation, that is, the Holy Father’s summing up of the Synod of Bishops for the Pan-Amazonian Region, which took place in October of last year. The synod gathered Catholic bishops, clergy, theologians and laypeople, including indigenous leaders from the region, to reflect on cultural, ecological and religious issues facing the Amazon.

Even though synods have been around for centuries and were given renewed emphasis by the Second Vatican Council in the 1960s, the Amazon synod was the first meeting of its kind to be organized around a distinct ecological territory. The region contains about 34 million inhabitants, including three million indigenous people from nearly 400 ethnic groups.

Pope Francis sees synods as opportunities for what Jesuits call “group discernment,” during which the Holy Spirit works through discussions and deliberations. This is one way that the pope tries to engage as many people as possible in important decisions. Thus, in “Querida Amazonia,”the pope is reflecting on what happened in that large group discernment.

In “Querida Amazonia,”the pope is reflecting on what happened in that large group discernment.

So, let’s look at five takeaways from “Querida Amazonia.” To do that, I will follow the pope’s four-part structure in the document and then add one final observation.

First, Francis dreams of a region that fights for the “rights of the poor,” especially those of the “original peoples” of the area. The pope takes aim at businesses, both national and international, that harm the Amazon and fail to respect the rights of the original peoples and bluntly labels such actions as “injustice and crime.” We should feel “outrage,” he says, when we see a minority of people profiting from the “poverty of the majority and from the unscrupulous plundering of the region’s natural riches.” The pope also apologizes for times when the church itself participated in these injustices and crimes.

Second, Pope Francis hopes for a world and a church that will recognize the distinctive cultural riches of the Amazon. In many places in the region, the globalized economy endangers or threatens “human, social and cultural richness.” So these distinctive cultures must be nourished, protected and celebrated. “Each distinct group in a vital synthesis with its surroundings,” he says, “develops its own form of wisdom.” But to hear this wisdom we need to protect and reverence the cultures from which it came.

Pope Francis hopes for a world and a church that will recognize the distinctive cultural riches of the Amazon.

Third, “Querida Amazonia”reiterates some of the most important themes from the pope’s magisterial encyclical on creation, “Laudato Si’.” Grounding his appreciation for the environment in a reverence for God’s creation, he reminds us that everything is connected: “The care of people and the care of ecosystems,” he says, “are inseparable.” But many economic interests see the Amazon simply as a place of industry or a place where one can withdraw natural resources, even though the equilibrium of the planet “depends on the health of the Amazon region.” We should, says the pope about the Amazon, “love it, not simply use it.”

Fourth, the pope turns his reflections to the church in the Amazon, and repeatedly stresses “inculturation.” This is an important theological concept, especially since Vatican II, but really since the beginning of the proclamation of the Gospel, because the Gospel message must always be announced in new ways to new cultures. In proclaiming the Gospel, the church “constantly reshapes her identity through listening and dialogue with the people, the realities and the history of the land in which she finds herself.” In other words, we must ask ourselves: What would a true church of the Amazon look like and what would “witnesses of holiness” from the Amazon look like? For the church to answer these questions it must be open to inculturation.

Finally, the pope looks at the most newsworthy of the topics taken up by the Synod: the questions surrounding the Eucharist. There are many remote places in the region where the Eucharist is not celebrated for long stretches of time because of the lack of a priest. And, as Francis notes, the Eucharist “makes the church.” So he asks for greater participation of laypeople, for example, in “exercising the pastoral care” of parishes and encourages women to contribute their gifts to the church, “in a way that is properly theirs.” He also asks for prayers for more priestly vocations and calls for more missionary priests.

But Pope Francis stopped short of calling for what the synod’s final document had proposed: the ordination of “viri probati,” or experienced married men, and, as some in the synod had suggested, the ordination of women as deacons. These two proposals, both suggested in light of the need for the sacraments in remote places, were not included in the pope’s exhortation.

However, Pope Francis is “officially presenting” the synod’s final document along with “Querida Amazonia,” so it accompanies the exhortation as part of his teaching. That may mean that the synod’s proposals are still up for discussion in the future. In any case, the question of the official status of proposals included in the synod document, but not explicitly endorsed in the exhortation, should probably be left to canon lawyers.

“Querida Amazonia” will delight some and disappoint others. But it is important to see that the document is the pope’s reflection on the synod’s own discussion, discernment and prayer. No matter what you think about globalization, inculturation, care for the environment, married priests or women deacons, the very process of following the “synodal way” and Pope Francis’ support of that way is a step forward for the church in the Amazon and around the world.

More: Synod on the Amazon / Environment / Women in the Church / Vatican

@jamesmartinsj
Provide feedback on this article
Join the conversation: Login or create an account
Before you can comment, you need to update your profile to include your first and last name, as required in our comments policy. Then reload this page and you'll be set up for commenting. Update your profile
Show Comments ()
Comments are automatically closed two weeks after an article's initial publication. See our comments policy for more.