Skip to main content
Signs Of the Times
April 1, 2013 issue 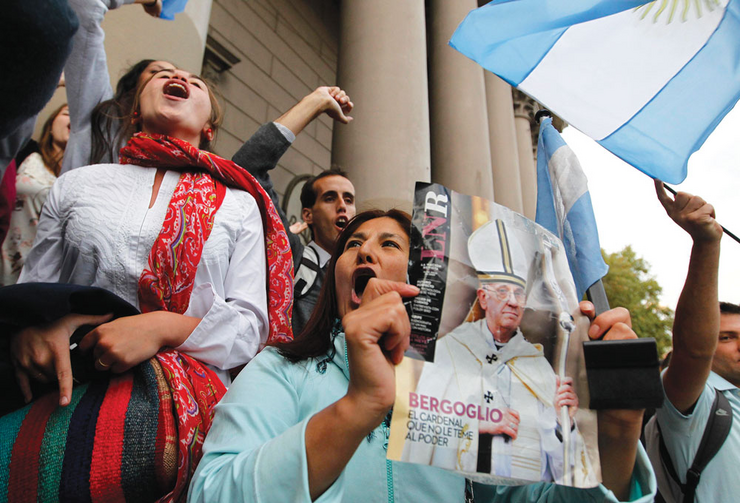 Cardinal Jorge Mario Bergoglio, S.J., has become the first pope in 600 years to be elected in time to receive his predecessor’s blessing. But that is far from the only first that will be associated with the Argentine-born pontiff. The firsts begin with the name he selected; he is the first Francis in 266 papacies (no I required until there is a Francis II).

Meeting the world media for the first time on March 16, he explained his inspiration. Upon his election a fellow cardinal had congratulated him and said, “Don’t forget the poor.” He took the words of his friend to heart, he said, and chose to be called after St. Francis of Assisi, “the man of poverty, the man of peace, the man who loves and protects creation,” the same created world “with which we don’t have such a good relationship.”

He told the more than 5,000 media representatives who had come from around the world for the conclave and his election, “How I would like a church that is poor and that is for the poor.”

Francis is the first Jesuit pope; he is also the first pope from outside Europe in 1,200 years and the first pope from South America, where a greater percentage of the world’s Catholics now live than in Europe. “The symbolism of choosing a pope from Latin America delights and touches us, most particularly in developing countries,” said Archbishop Stephen Brislin of Cape Town, South Africa, president of the Southern African Catholic Bishops’ Conference. “Pope Francis is a person from humble beginnings,” the archbishop said. “He has frequently and courageously spoken of the grave inequities afflicting the world, and his thirst for justice for all people will be a strong characteristic of his papacy.”

His first gestures impressed millions of Catholics—and others—around the world, suggesting a sense of humility and solidarity that could prove a theme of this papacy. That humility is in keeping with the election itself—just about no one in the media considered the Argentine cardinal a contender. It is also true to the pope’s past demeanor as archbishop of Buenos Aires, where he eschewed the prerogatives of his position. Cardinal Bergoglio took the bus to work, cooked for himself and elected to live in a modest apartment instead of an episcopal palace.

Church bells tolled around the world with the announcement of the new pope, about 25 hours after 115 cardinal electors entered a conclave to consider who would succeed the retired Pope Benedict XVI. Catholic leaders worldwide expressed hope and joy, calling the faithful to come together as one body behind the papacy of Pope Francis. International political leaders also offered words of congratulations and pledged to work with the new pontiff on common goals and concerns in a complex world.

“His election may have taken many of us by surprise, including me,” said Archbishop Vincent Nichols of Westminster, England, president of the Catholic Bishops’ Conference of England and Wales. “But the more we learn about him, the more it becomes clear that the election of Pope Francis is an inspired one and that his papacy will be inspiring.”

Argentines expressed shock and pride at their cardinal’s unexpected elevation. “He came from the end of the world,” the daily La Nación announced in a headline, stealing a line the pope used himself the night of his election. Argentines recall Pope Francis as personable, with a common touch—someone who took time for ordinary people.

“He’s the same person now as he was then,” said a hardware store owner, Antonio Franco, who was taught catechism by the young Father Bergoglio.

Despite his reputation as an austere intellectual, Pope Francis showed a deft personal touch as a cardinal, visiting with the Argentine church’s most vulnerable people, the poor and people suffering from AIDS. He has called for more pastoral care of divorced Catholics, and he memorably castigated Argentine priests who refused baptism to the child of an unwed mother as “today’s hypocrites.”

As archbishop of Buenos Aires, Pope Francis led protests against abortion laws and same-sex marriage but reportedly was willing to accept civil unions as a compromise. He also protested against corruption—a touchy topic in Argentina. Pope Francis has been at times scathing in his criticism of the International Monetary Fund and the global economic system, especially after the peso crisis in Argentina in 2001. “This choice of pope puts service to the poor and tackling injustice at the forefront of the church’s mission in the world,” Tom O’Connor, a spokesperson for Britain’s Catholic Agency for Overseas Development, commented.

Born in Buenos Aires on Dec. 17, 1936, Jorge Mario Bergoglio studied chemical engineering, but then chose the priesthood. In 1957 he survived a severe case of pneumonia, and his right lung was partially removed as a result of the illness. The next year he entered the novitiate of the Society of Jesus. He was ordained in 1969. He eventually served as superior of the Jesuits in Argentina in the 1970s during a trying and dangerous time, as a military junta waged the so-called Dirty War against perceived leftists. Thousands perished, including priests, seminarians and religious.

That tenure has long proved controversial, with some criticizing him and other Argentine prelates for not doing more to stand up to the generals or, worse, acting in some degree of complicity with them. In a court deposition he denied acting in any way with the junta, and the Vatican spokesperson Federico Lombardi, S.J., said there has never been “a concrete or credible accusation” against the pope. Lombardi charged that the accusations come from “anticlerical elements to attack the church” and “must be firmly rejected.”

He became auxiliary bishop of Buenos Aires in 1992 and later its archbishop, and from November 2005 to November 2011 he was president of the Episcopal Conference of Argentina. He was made a cardinal by Pope John Paul II in 2001.

Hailing from the church’s “growth regions” in the global south, Pope Francis can be expected to be attuned to the concerns of developing nations and problems of global inequity and human deprivation. His parents were Italian immigrants to Argentina, and he was raised in a thoroughly Europeanized culture. That background may put some of the Roman Curia’s cardinals at ease. If the “only Nixon could go to China” analogy can be applied in this instance, it could be that only a Pope Francis could push through the Curia’s obstructed doors and truly effect its reform.

This article also appeared in print, under the headline “Silence and Service: Pope Francis Captivates Catholics Worldwide,” in the April 1, 2013, issue.

Kevin Clarke is an associate editor at America.