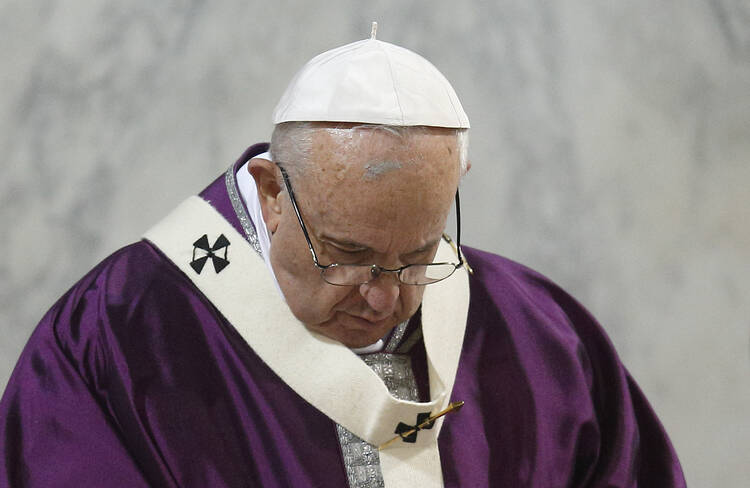 Pope Francis is pictured with ashes on his forehead during Ash Wednesday Mass at the Basilica of Santa Sabina in Rome Feb. 14. (CNS photo/Paul Haring)

Pope Francis “normally” meets with victims of abuse on Fridays, and “sometimes this is known and sometimes it is not known,” he revealed in a Jan. 19 conversation with Peruvian Jesuits in Lima, Peru.

He said it is “terrible” if even one priest abuses a minor, “for God anointed him to sanctify children and adults, and instead of making them holy he has destroyed them. It is horrible!”

He insisted that “we need to listen to what someone who has been abused feels,” and he revealed that he had done so in Chile. “As their process is very hard, they remain annihilated. Annihilated!” he said.

The pope insisted that “we need to listen to what someone who has been abused feels,” saying they “remain annihilated. Annihilated!”

Francis went on to state that “for the church this is a great humiliation. It shows not only our fragility, but also, let us say so clearly, our level of hypocrisy.”

La Civiltà Cattolica, the Italian Jesuit weekly vetted by the Vatican, broke the news today, Feb. 15, publishing a transcript of the conversations Francis had with Jesuits in Chile and Peru during his recent visit there. The transcript, produced by the magazine’s editor, Antonio Spadaro S.J., was approved by the pope before publication.

Greg Burke, Vatican spokesman, confirmed this revelation today in response to questions from journalists. “I can confirm that the Holy Father meets victims of sexual abuse, either individually or in groups, several times a month. Pope Francis listens to the victims and seeks to help them and to heal the grave wounds caused by the abuses they underwent.”

“For the church this is a great humiliation. It shows not only our fragility but also our level of hypocrisy.”

Mr. Burke added that “these encounters take place in maximum confidentiality, out of respect for the victims and their sufferings.” He refused to give information regarding the number or identity of the survivors that the pope has met.

The news comes as media and victims’ rights organizations are criticizing Francis for his insensitive response to Chileans who accused Bishop Juan Barros of being present when they were abused by the Rev. Fernando Karadima, his mentor, and of covering this up. Victims sent a letter to the pope, which was given to him by Cardinal Seán O’Malley of Boston in 2015, soon after Francis had nominated Barros as bishop of Osorno. They were dismayed when during his visit to Chile he said he had not received evidence that could lead him to condemn Barros.

While it is not known if the pope ever read the letter, the incident has called into question Francis’ credibility and integrity regarding sex abuse, and led to charges that he is insensitive to victims. Some have even suggested that he has been implicated in a coverup, does not implement a zero tolerance policy on abuse, and does not have the care of victims as a priority in his pontificate.

Aware of this, and less than a week after his conversation with the Jesuits in Chile and Peru, Pope Francis sent the archbishop of Malta, Charles Scicluna, former Promoter of Justice for the most grave crimes (a role equivalent to that of prosecutor) including abuse of minors at the Congregation for the Doctrine of the Faith and president of its board of appeals in abuse cases, to Chile to listen to the abuse victims of Father Fernando Karadima, who accuse Bishop Juan Barros of being present when the abuse happened and of covering this up.

Victims’ rights organizations are criticizing Francis for his insensitive response to Chilean victims.

Archbishop Scicluna, who is going as the pope’s envoy, will begin his mission in New York on Saturday, Feb.17, where he will meet the best-known of those victims, Juan Carlos Cruz. From there he will travel to Santiago, Chile, where next week he will listen and take testimonies from other victims, as well as other Chileans who want to give information to him on this matter. The archbishop will report back directly to Pope Francis at the end of his mission.

Pope Francis revealed the news about his regular meetings with victims in response to a question from a Peruvian Jesuit who asked him to speak about the theme of sexual abuse, and the associated scandals which cause a lot of desolation to the church.

He began by recalling that he had spoken to Chilean priests and religious men and women in the cathedral of Santiago the previous day, Jan. 18, and said “this is the greatest desolation that the Church is suffering. It brings shame.” But, he said, “we need to remember that shame is also a very Ignatian grace, a grace that St. Ignatius asks us to make” in the Spiritual Exercises, “and so let us take it as a grace and be fully ashamed.” At the same time, he said, “we have to love the Church with her wounds. Many wounds…”

“This is the greatest desolation that the Church is suffering. It brings shame.”

He went on to recount a personal experience that he had in relation to the abuse scandal. “On March 24 Argentina remembers the military coup d’état, the dictatorship, the desaparecidos (the disappeared)… and every March 24 the Plaza de Mayo fills to remember it.” Then, “one year, on March 24,” he said, “I left the archbishop’s house and went to serve as confessor for the Carmelite sisters. On my return I took the subway and got out six blocks away from Plaza de Mayo. The Plaza was full … and I walked those six blocks to enter by the side. When I was about to cross a road, there was a couple with a child of two or three years, and the child ran ahead. The father said to him: ‘Come, come, come here… Be careful of the pedophiles!’ How shameful I felt! What shame! They didn’t realize that I was the archbishop, I was a priest and...what shame!”

Francis noted that “occasionally” someone, by way of “consolation prizes,” might appeal to “the statistics” which show that perhaps (he said he didn’t know for sure the exact figure) “70 percent of pedophiles are in the family setting, people known to the family. Then at the gyms and in the swimming pools” and then argue that “the percentage of pedophiles who are Catholic priests does not reach 2 percent, it’s 1.6 percent” and conclude “it is not that much.”

Pope Francis made it clear he does not buy that argument and stated categorically, “but it is terrible even if only one of our brothers is such! For God anointed him to sanctify children and adults, and instead of making them holy he has destroyed them. It’s horrible!”

Francis went on to state that “for the Church this is a great humiliation. It shows not only our fragility, but also, let us say so clearly, our level of hypocrisy. In cases of corruption, in the sense of abuse of an institutional type, it is notable that there are some newer congregations whose founders have fallen into these abuses. These cases are public.” This seemed to be a reference primarily to the Legionaries of Christ and their founder Father Marcial Maciel.

He told his Jesuit audience, “You here have many painful cases. But it is curious that the phenomenon of abuse touched some new, prosperous congregations. Abuse in these congregations is always the fruit of a mentality tied to power that has to be healed in its malicious roots.”

Pope Francis went on to identify “three levels of abuse that come together: abuse of authority (mixing the internal forum with the external forum), sexual abuse and an economic mess.” He added that “there is always money involved. The devil enters through the wallet.” He recalled that St. Ignatius, the founder of the Jesuits, “places the first step of the devil’s temptations in riches…then come vanity and pride; but first of all, it is riches.” Indeed, he said, “the three levels come together very often in the new congregations that have fallen into this problem of abuse.”

He urged the Jesuits present to “read what I said to the Chileans” in the cathedral because “that material is more carefully articulated and reasoned than what comes to me now spontaneously.”

He must have gotten the 1.6% from Cardinal Ratzinger's guess when the press confronted him. The investigative firm hired by the USCCB SAID C. 4.5% of priests were involved in those decades. I think he never read the letter detailing Barros' own actions and I think John Paul II never read the 1985 report from two authors that sex abuse in the US by priests was a large scandal that would one day break. I think bad manager types rise to the papacy ( those 2) because our Cardinals look for people who will be interesting to the media which media didn't exist when Pius XII was elected. And we'll continue to elect these dreamer types who don't read what they are handed. Who wants a dull reliable manager when the press is watching...not us.

The 1.6% figure is based on worldwide data.

Give us a link....I can find no research of world data at all.