Rabbi Skorka: What my friendship with Pope Francis taught me about interfaith dialogue 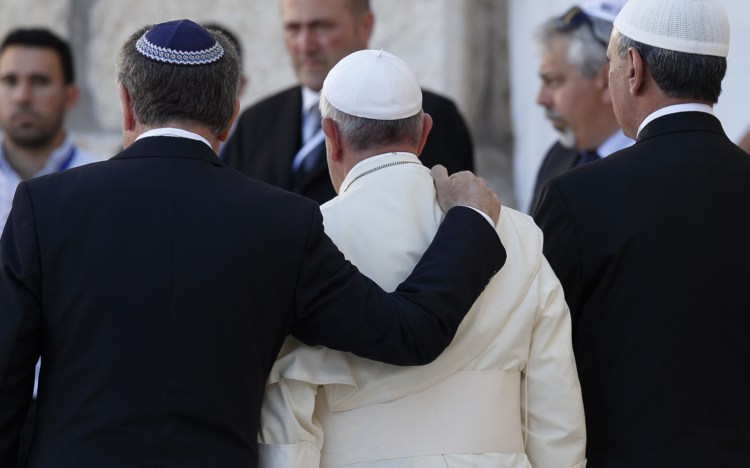 Pope Francis walks with Argentine Rabbi Abraham Skorka, left, and Omar Abboud, a Muslim leader from Argentina, as he leaves after praying at the Western Wall in Jerusalem in this May 26, 2014, file photo. (CNS photo/Paul Haring)

This February, I will be a participant with my friend Pope Francis at a “Global Conference on Human Fraternity” hosted by the United Arab Emirates in Abu Dhabi. It seeks a common framework of cooperation among religious leaders to achieve peace and human solidarity.

Interreligious dialogue has always been a priority for me. I learned its importance from my mentor Rabbi Marshall T. Meyer, a protégé of the great Rabbi Abraham Joshua Heschel. I first met Jorge Mario Bergoglio nearly 20 years ago, when he was an auxiliary bishop in Buenos Aires. We recognized in the other a partner for the enactment of our shared commitment to dialogue between and among religions. In the following years, we engaged in numerous heartfelt conversations, which we both found deeply meaningful and transformative.

In preparation for the gathering in Abu Dhabi, I find myself asking why my dialogues with the future Pope Francis so powerfully affected both of us. How did they move beyond being superficial exchanges of information to become profound spiritual and personal experiences? How did they come to embody what he has described as “the journey of friendship” that Jews and Catholics have undertaken since the Second Vatican Council?

Pope Francis: “To dialogue, one must know how to lower the defenses, to open the doors of one’s home and to offer warmth.”

First, we consciously put God at the center of our exchanges. We talked about God and how to draw closer to God. We wanted to learn from each other’s experiences of God. This gave us both the certain awareness that God was accompanying us on our journey.

Keeping focused on our relationships with God kept us humble and more open to each other. As Francis put it in On Heaven and Earth, the book we co-authored, “To dialogue, one must know how to lower the defenses, to open the doors of one’s home and to offer warmth.” We understood that God has fashioned all of us in the divine image, enabling us to see God’s reflection in each other’s faces as we increasingly opened our hearts to each other.

Additionally, we never tried to persuade—or dissuade—each other of anything. As Pope Francis has recalled: “[T]here was a basis of total trust, and...neither of us negotiated our own identity. If we had, we would not have been able to talk. It would have been a sham.... And neither of us attempted to convert the other.” Because of our trust, “our dialogue was free-wheeling,” as Francis reminded me when I shared a draft of this essay with him. Respect for each other’s religious integrity, in fact, helped us learn together. “My religious life became richer with his explanations, so much richer,” my friend observed.

It would be a blasphemy to God if we were to let even defining differences separate us as God’s children and as brothers.

Francis and I also understood that the demands of the present—the common effort for peace, the alleviation of hunger, the ending of the destruction of our global ecosystem—were urgent. Beyond the differences and perceived differences that have separated Jews and Christians for centuries, of far greater significance is the common ethical foundation we share in the Bible, which allows us to work together.

Crucially, we each tried to understand the other’s religious identity on its own terms and to share each other’s concerns. I recall Francis’ pain over anti-Semitism. “A Christian cannot be an anti-Semite,” he has repeatedly declared as pope. He has also stated that “an outright attack on the state of Israel is [a form of] anti-Semitism” because “Israel has every right to exist in safety and prosperity.”

Although Francis has expressed these sentiments because of his deep respect for human rights and for the Jewish people and tradition—and not because of our friendship—his ability to empathize with the heartache of others was a great gift that often enriched our dialogues.

Finally, we treasured the differences within our commonalities. We have learned that it would be a blasphemy to God if we were to let even defining differences separate us as God’s children and as brothers. Dialogue is the imperative of our age. Francis once wrote to me that “the seed of peace, once sown, will not be destroyed. You have to wait for the birth of the time that will favor its growth by praying and following the commandment of love.”

This is the message I hope to bring to Abu Dhabi. Striving for authentic friendship and peace through dialogue is not pursuing an illusion. Actually, it is the destiny of human existence. 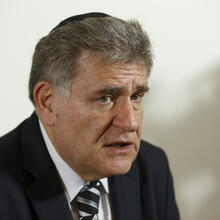 Rabbi Abraham Skorka is university professor at Saint Joseph’s University in Philadelphia and co-author with Pope Francis of On Heaven and Earth.

Bottom line is the Jews will only find salvation in Jesus.

Rabbi Skorka and Pope Francis lead by example. Thank you!

The only legitimate objective of "interfaith dialogue" is to convert the non Catholic to the one, true Church. Anything else is just banalities.

I remember Jesus said exactly the same thing when He engaged in interfaith dialogue throughout His life.

I remember Jesus said exactly the same thing when He engaged in interfaith dialogue throughout His life.

Carrying the aspirations of the people to the dialogue table can be a good starting point.