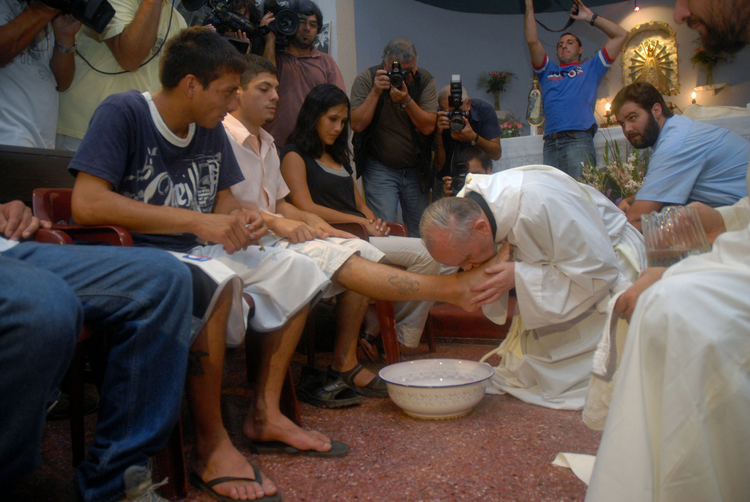 On Thursday evening, in a familiar reprise of an ancient rite, Bishop Robert Morlino of Madison, Wis., will wash the feet of 12 men, all seminarians — a re-creation of Jesus’ action at the Last Supper when he washed the feet of his disciples and, according to Catholic doctrine, formally instituted the priesthood.

That same evening, thousands of miles away, Pope Francis will also observe the Holy Thursday rite, though not in a cathedral like Morlino, but at a center for people with disabilities. There he will wash the feet of a number of residents, all lay people and perhaps some of them women and even non-Christians or nonbelievers.

Francis did something similar last year, shortly after his election, when he stunned church observers by traveling to a juvenile detention center outside Rome and washing the feet of 12 young people, two of them women and two of them Muslims.

More than a few tradition-minded Catholics were aghast at the pope’s example and they welcomed Morlino’s effort to hold the line against innovations, at least in his Wisconsin diocese.

“The Church’s law says that only men may be the recipients of this foot washing,” wrote the Rev. John Zuhlsdorf, a scrappy blogger popular with the Catholic right. “Morlino’s guidelines” — that his priests must wash the feet of 12 men or not do the foot washing at all — “do nothing but reiterate the Church’s laws, which bishops and priests are obliged to follow.”

Is the pope a dissenter? Or are Morlino and others being legalistic? What does the foot washing ritual represent, anyway?

There are no simple answers to those questions, though the weight of history and custom — not to mention authority — seems to be on the pope’s side.

Neither were part of the Holy Thursday liturgy, and popes and clerics routinely washed the feet of poor people as a sign of service and humility. In convents, as well, “woman washed feet and had their feet washed,” and they washed the feet of guests and children, said Rita Ferrone, the author of several books about liturgy and a consultant to U.S. dioceses on liturgical matters.

“Foot washing does have a long tradition,” Ferrone said, “and it didn’t exclude women up until 1955.”

The problem is that back then, Catholic women were not allowed into the restricted space near the altar and, unlike today, they could not have any part in the Mass. So the rule was that 12 chosen men — “viri selecti” in the Latin — would have their feet washed by the priest or bishop.

With that change, the foot washing rite also came to be seen as a kind of re-creation of the Last Supper and the institution of the priesthood.

“The tradition was not to have it be a dramatization of what Jesus did at the last Supper but to be a response to the command to humble service,” Ferrone said.

While the Second Vatican Council in the 1960s ushered in numerous reforms, including of the liturgy, the rule on only washing the feet of men was never addressed.

But in the 1970s, in an effort to reflect the new openness of the church, bishops and priests in many dioceses simply ignored the old regulation and began washing the feet of lay people, including women. Sometimes there were a dozen, sometimes more.

Indeed, there is a photograph of Pope Francis, when he was Cardinal Jorge Bergoglio of Buenos Aires, washing the feet of women with babies, some of whom were breast-feeding.

Today, the U.S. Conference of Catholic Bishops acknowledges the letter of the law but stresses that the rite aims to signify both charity and “humble service” rather than a re-enactment of the foundation of the priesthood. It drops any reference to washing the feet of 12 people (the number of the disciples) and notes that “it has become customary in many places to invite both men and women to be participants in this rite in recognition of the service that should be given by all the faithful to the Church and to the world.”

So in that sense, it is a return to a more ancient tradition, and very much in line with what Pope Francis is doing.

A Vatican spokesman, the Rev. Thomas Rosica, said Tuesday that Francis’ decision to include women and nonbelievers was meant as a gesture “to embrace those who were on the fringes of society.” The official rules, he said, can sometimes be a distraction from “the profound messages of the Gospels and of the Lord of the Church.”

Still, this is the Catholic Church, and rules are rules. Even though a Vatican spokesman last year said Francis’ decision to wash the feet of women and Muslims on Holy Thursday was “absolutely licit” because it did not entail a sacrament, canon lawyer Edward Peters said that Francis set a “questionable example” by ignoring church law.

Peters, a blogger popular with church conservatives and a supporter of the rule, said it would be better to change the rule rather than risk undermining the rule of law by flouting it.

There are, of course, others who would like to see the current rule maintained and enforced the way Morlino does, and not just to maintain good order in the church.

“This is being used by those who wish to make a point about holy orders being reserved to men,” Ferrone said. The debate over the Holy Thursday foot washing, she said, “becomes yet another occasion for people who would like to see women excluded from the sanctuary."

PHOTO: Pope Francis, as cardinal of Buenos Aires, Argentina, washes and kisses the feet of residents of a shelter for drug users during Holy Thursday Mass in 2008 at a church in a poor neighborhood of the city.

Show Comments (
8
)
Comments are automatically closed two weeks after an article's initial publication. See our comments policy for more.
Bill Mazzella
6 years 4 months ago
” The official rules, he said, can sometimes be a distraction from “the profound messages of the Gospels and of the Lord of the Church.” I'll say. O Rubrics!! Rules and rubrics were basically put in place to avoid abuses. As usually happens, when people right rules they get out of hand. The great Bernard Haring gave a sermon to members of a Benedictine order and told them that it was more important to show charity than to follow the rules of the monastery. The monks were baffled and asked him to clarify. Which he did by affirming what he said. It is so regrettable that people are scandalized by a violation of Canon Law but just brush off all the hatred and anger that even so called religious people exhibit. Rules have triumphed over the Gospel. Rubrics have ruled over the Spirit. Such and inversion of the message of Jesus. That this should even be a question shows how astray we have gotten. Lead us Francis. Doce nos!
Joshua DeCuir
6 years 4 months ago
At least one "moderate" raised questions about, if not the practice, at least the justification. Mr. Gibson's fellow dotCommonweal blogger, Fr. Joseph Komonchak, raised some questions in this blog post: https://www.commonwealmagazine.org/blog/pontifex-legibus-solutus Seems it would have made this column a little less "conversatives versus Francis" if Mr. Gibson had included some of Komonchak's thoughts.
Bill Mazzella
6 years 4 months ago
Joshua, The most flagrant abuse of papal power was the encyclical Humanae Vitae. Definitely against the practice of the faithful. And Canon Law clearly states: "Custom is the best interpreter of law." A custom is an unwritten law introduced by the continuous acts of the faithful with the consent of the legitimate legislator. Custom may be considered as a fact and as a law. As a fact, it is simply the frequent and free repetition of acts concerning the same thing; as a law, it is the result and consequence of that fact. Hence its name, which is derived from consuesco or consuefacio and denotes the frequency of the action. (Cap. Consuetudo v, Dist. i.) I know there is the proviso---consent of the legitimate legislator. Let's call that the Sensus Fidelium.
Joshua DeCuir
6 years 3 months ago
I do not disagree with the practice of washing the feet of women (although as Pope Francis' homily from this morning's Chrism Mass makes clear, there is a deep link between ordination & Holy Thursday). Nor do I disagree that "custom" can be raised to the level of law (although it could be noted that many "devotional" customs that had near force of law were quickly swept aside in the liturgical reforms). That said, I still think Komonchak raises an important point in his post. And more, Komonchak's raising the point undermines the neat & tidy dichotomy Mr. Gibson's column seeks to draw. As Fr. Komonchak reminds the reader - it was not long ago that Pope John Paul II angered many liturgists, including Ms. Ferrone who is quoted in the column, for instituting a custom - Divine Mercy Sunday - as a universal feast in the Church.
Tim O'Leary
6 years 4 months ago
I found the symbolism of Pope Francis washing the feet of women and Muslims very moving and fitting so I guess that would exclude me from the "conservative" camp. I believe Church rules and practices are subordinate to the hierarchy, as opposed to the natural law which the hierarchy is subordinate to. It seems to be like the Lord's teaching on the Sabbath. "Then he said to them, "The Sabbath was made for man, not man for the Sabbath." (Mark 2:27). Humanae vitae was an act of humble subordination to the natural law, as an act of the Magisterium (one wholly followed by Pope Francis, by the way).
Anne Chapman
6 years 3 months ago
I doubt seriously that Humanae Vitae presents much of a real life dilemma to the Pope. So glad that at least on foot washing you aren't among the "conservatives". (Didn't the editor ban that word?)
Tim O'Leary
6 years 3 months ago
Certainly, now that he is in heaven, he is free from many worldly dilemmas. HV is not just for married people, by the way. It is about giving oneself fully and freely to another. SS. Pope JXXIII the Good and Pope JPII the Great have plenty of opportunity to discuss their pastoral approaches now. And we may get there too, if we use the saints as guides.
Bill Mazzella
6 years 3 months ago
Got news for you, Tim. Not all the canonized are saints.
Advertisement