No Man Is an Island ... Even on Lampedusa 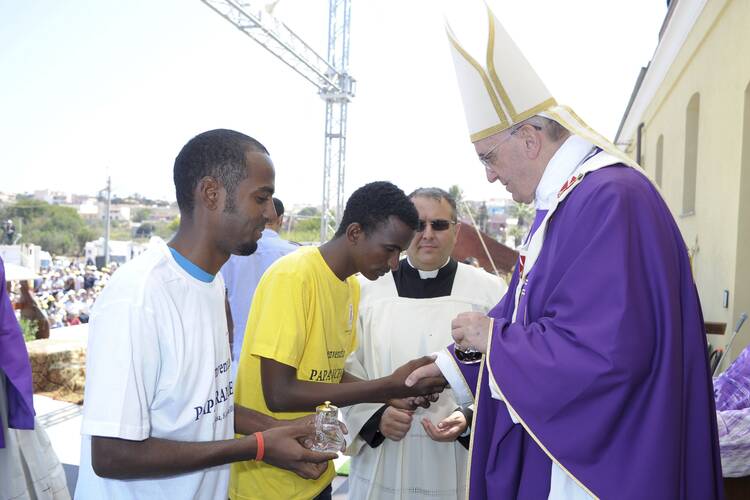 Pope Francis' quotability average maintained well above .500 today when he spoke of the "globalization of indifference," his expression for the worldwide expansion of a kind of anti-solidarity, an encroaching acceptance of the suffering of others. His offered his latest entry into Bartlett's during his first appearance outside of Rome when he celebrated Mass in Lampedusa, an Italian island near the coast of North Africa, where  dozens of illegal immigrants arrive every day. The island is a Euopean landfall that an unknowable number of migrants die attempting to reach each year. Speaking of such deaths, he said: “Lord, we ask  forgiveness, for those who with their laws and decisions have created situations, that have led to these tragedies...”

The base of the altar Pope Francis used for his first celebration of the Mass outside of Rome was made from a boat used by group of North African migrants. The United Nations reports that 8,000 people have landed on Lampedusa’s coasts in the first half of 2013. During the Arab Spring, dozens of boats arrived each day. Many of the new arrivals are Muslim and Pope Francis used his homily on Lampedusa to offer greetings on the beginning of the Muslim observance of Ramadan. "I sent heartfelt greetings to dear Mulsim immigrants who, this evening, will begin the Ramadan fast, and wish them them abundant spiritual rewards," he said.

"The Church is close to you in your search for a better lives for yourselves and your families." Pope Francis explained during his homily that he felt compelled to come to Lamepdusa after "I heard a few weeks ago that more immigrants had drowned.

"The news was like a thorn piercing my heart," said Francis, referring to an incident in mid-June when at least 10 migrants drowned off Malta when a Tunisian fishing boat allegedly refused to rescue them. "I felt I must come to Lampedusa to pray that such a tragedy doesn't happen again," Francis said, worrying that "we have lost our sense of fraternal responsibility."

Kevin Clarke
@clarkeatamericaclarke@americamagazine.org
Show Comments (
2
)
Comments are automatically closed two weeks after an article's initial publication. See our comments policy for more.
David Pasinski
8 years 10 months ago
Hope! Thank you, Pope Francis! May the rest of us act on your words to create communities of caring in the face of growing intolerance.
Manuel Carrasco García-Moreno
8 years 10 months ago
Very nice article. I simply love the Pope, his actions and his ministry spreading the Gospel of Love. Just a tiny note. In the article you use the expression "illegal immigrant". Wouldn't it be more accurate and more charitable to say "undocumented immigrant"? Using the later would express that there is no such thing as an "illegal" person.