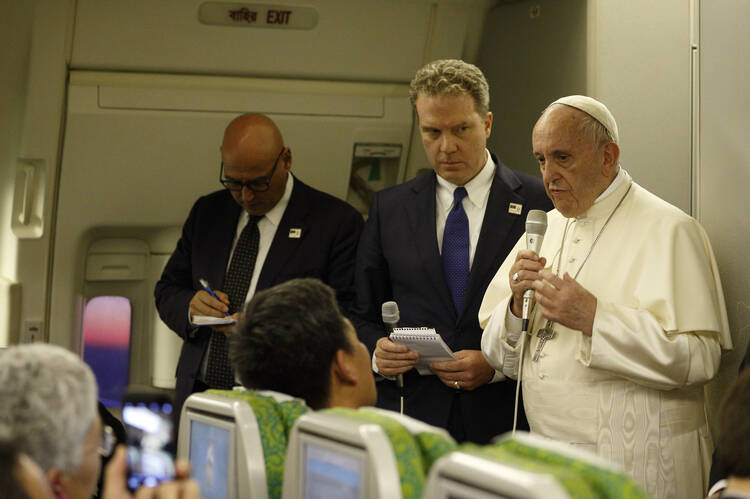 The sunset is seen through a window as Pope Francis answers questions from journalists aboard his flight from Dhaka, Bangladesh, to Rome Dec. 2. Also pictured is Greg Burke, Vatican spokesman. (CNS photo/Paul Haring)

Pope Francis revealed that he cried with the Rohingya when he met 16 of them in Dacca on Friday. On his flight back to Rome, Francis said, “The conscience of humanity today has been formed around the Rohyinga, [so much so] that the United Nations has said that the Rohyinga are today the religious, ethnic minority that is the most persecuted in the world.”

The pope spoke about how he sought to address the persecution of the Rohingya during his visit and how he sees the situation in Myanmar unfolding in the future. He also said he hopes to visit India next year but voiced regret that there are no plans for a China visit. The pope did reveal that there will be another meeting of the joint China-Holy See commission in Beijing in the next week.

During his visit to Myanmar and Bangladesh, Francis spoke in private with the country’s top political and religious leaders, and also with military leaders in Myanmar. Asked about the situation in Myanmar, and in particular that of the Rohingya, who suffered military attacks on their villages in Rakhine state in August, Francis replied, “It will not be easy to go forward in a consultative development, and it will not be easy for the one who wants to go back.”

Rakhine State is rich in precious stones and natural resources, and many believe that some “interests,” especially China, want control of these resources, and that Myanmar’s military are facilitating this access.

He also noted, “Someone said, I don’t know who, that Rakhine state is very rich in precious stones and that maybe there are interests that want this land without people so they can work on it.”

It was a significant observation. Rakhine State is rich in precious stones and natural resources, and many believe that some “interests,” especially China, want control of these resources, and that Myanmar’s military are facilitating this access.

Francis said of the conflict, “One must dialog, one step and then another step, maybe a half step backwards, another step forward,” and he said progress must be made through negotiation, “never with punishment, never with war.” He speculated that “a turning point” has been reached in the Rohingya situation. “The presence of God today is also called Rohingya,” Pope Francis had declared in Dhaka on Friday after meeting 16 Rohingya refugees.

We have reached “the limit” with nuclear arms, says Pope Francis, and must “go back”
Gerard O’Connell

Asked why he met with the commander-in-chief of Myanmar’s armed forces, Min Aung Hlaing, before meeting the president and Aung San Suu Kyi, the de-facto leader of the country, Francis explained, “the general asked to speak [with me] and I received him. I never shut the door. Who wants to talk comes…one can’t lose anything by talking…. It was a good conversation. I can’t talk about it because it was private, but I did not negotiate the truth. I made sure he understood that the old ways are not viable nowadays. It was a good meeting, civilized, he received the message.” The pope also said that he had planned to meet with the general on Nov 30 but moved the meeting up by three days because the general had plans to travel to China. “When these things happen…if I can move the appointment, I will.”

When it was suggested that the general may have wanted to meet him first to show who has the power in Myanmar, Francis responded, “Whether there were other intentions [behind the change] I don’t know.… I think dialogue is more important than the suspicion that you are suggesting.”

Asked why he waited until yesterday to use the word Rohingya during his weeklong trip to Asia, Francis explained, “I try to say things step by step and listen to the answers until the message arrives. For example in daily life, an adolescent boy or girl can say what they think, but slamming the door in the face of the other, the message doesn’t arrive—it closes.”

The pope added that if he “had said that word” during his formal speech on Tuesday in Nay Pyi Taw, the administrative capital of Myanmar, “I would have been slamming the door.”

The pope added that if he “had said that word” during his formal speech on Tuesday in Nay Pyi Taw, the administrative capital of Myanmar, “I would have been slamming the door.” Instead, he said, “I was very very satisfied by the meetings I was able to have…. I had the satisfaction of dialogue, of letting the other speak, saying what I had to say and in this way, the message arrived.”

The Myanmar trip culminated in yesterday’s meeting with the Rohingya refugees, which appeared on the front pages of all the local newspapers today. That meeting occurred at the the archbishop of Dhaka’s house, as part of an ecumenical and interreligious meeting with Muslim, Hindu, Buddhist and other Christian religious leaders.

The pope said he had wanted to visit the Rohingya refugee camps in Bangladesh,but “that wasn’t possible” for various reasons, including time and distance. “I knew I would meet the Rohingya, I didn’t know where or how, but it was a condition of the trip for me, and they prepared ways. After many dealings back and forth, with the government, with Caritas, the government allowed this trip of those [Rohingya] who came yesterday.”

Francis then described how the meeting organizers wanted the refugees to leave the stage after they had greeted him, and how he “got angry” and insisted that they be allowed to stay. He recalled that after he listened to their stories, he felt he had to speak and ask forgiveness of them, and that as he listened to them, “I was crying. I tried to hide it. They cried too.” He then invited the other religious leaders to greet them, and at the end he asked one of the Rohingya to say a prayer. At that point, he said, “I felt the message had arrived.”

Francis again praised Bangladesh for welcoming these refugees and giving an example to the world. “We have to be grateful”, he said, because though Bangladesh is “a poor and small country, they received 700,000! I think of countries that close their doors.”

It is astounding to see how Francis operates. He is an inspiration to me in my own personal tangles, as well as a guide to a new way to see and be in the world. A true shepherd for our time. He leads us as Christ leads him. What a miracle.

The man's airplane fossil fuel print is inspiring to no one. He promotes himself with a strange bias. He says he "never shuts the door" and thus met with the general but within the Church, he often shuts the door to those who question him and wait for his response forever...while they then read his innuendoes in the media that they are pharisees for disagreeing with him. His two predecessors did zero about pro abortion Catholic pols and he will do zero also about them...and zero about sexual hook up rates on Catholic college campuses...and zero about five Catholic cultures being in the top five murder rate countries in the world. Popes have fallen in love with media coverage of them as being guiders of the world when they have been doing little administrative actual work on the community they are supposed to take care of....and actually guide. The admin part of the papacy is the hardest so they avoid it and travel and comment instead....and love the cameras and reporter attention. We are all like that. Who cleans behind the frig...the hardest job in the house. No one. Understand that and you'll understand the recent Popes and how they reformed Catholic crises not at all but either became authors or world travelers instead.
Watch when you next think of cleaning the cellar....you'll take a trip to Wendy's instead to get a vanilla frosty. Stopping sexual hookup rates on Catholic campuses is cleaning the cellar....Popes think of it and then instead... travel to Asia to save non Catholics from other non Catholics. It's easier than stopping fornication on Catholic campuses. It's talk...it's not phone work with a Dean who doesn't get back to you when he said he would.

We all heard the words: “The Pope will be choosing his words carefully this week" when speaking about the human rights abuses against the Rohingya people while never using the “R” work at all. Uttering it or not, whenever Pope Francis referred to suffering from the chaos of displacement and exile, it was very clear what he was saying and about whom he was saying it.

Having just completed a two years assignment in Myanmar I understand why the Pope would follow the strong suggestion of Cardinal Charles Bo of Yangon and other Church leaders not to use the “R” word. It is hard for those not familiar with daily life in Myanmar to understand that a public condemnation in Myanmar of the country’s military actions could easily be used by ultra-rightest Buddhist sects to unleash serious damage to Catholic institutions and people since such sects would interpret the Pope’s words as siding with the Muslims who, they say, are ruining their culture and traditions, and stealing their land. I seriously doubt that the Pope’s peaceful and beautiful Mass with 150,000 attending on November 29th would have been as inspirational had he uttered the “R” word before it.

In Myanmar and elsewhere, Pope Francis is a spiritual leader seeking to encourage people of all faiths and traditions to live justly and lovingly. He is not a politician although almost everything he says can be taken politically. A spiritual leader seeks to name reality for what it is, and in a manner that keeps doors and windows open for conversation publicly and privately.

The tragedy around the Rohingya people is obviously very serious. This being said, I feel that the wide obsession with this issue is also somewhat misplaced. In this country of 54 million people, the majority are poor, often miserable and suffering from the financial chaos and mental trauma from nearly six decades of repression. Why is it that nobody speaks about these aspects of the country’s suffering and struggle?