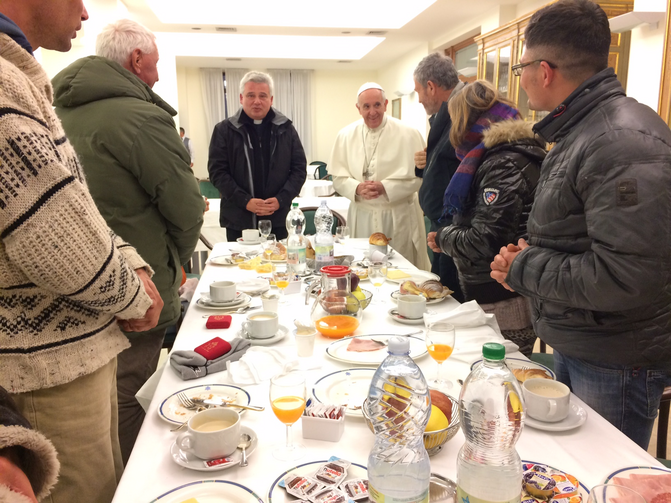 Today Pope Francis celebrated his 80th birthday by having breakfast with eight homeless people from different countries. After rising early and praying for some hours, Francis had breakfast at Santa Marta, the Vatican guesthouse where he lives.

At his instruction, the almoner, the Polish Archbishop Konrad Krajewski, had gone out at dawn and chose the eight individuals from those gathered near St. Peter’s at the showers that Francis had erected for them under the colonnade beneath the Apostolic Palace. Among them were four Italians, two Romanians, one Moldovan and one Peruvian.

The archbishop took them to Santa Marta at 7:15 a.m. and on arrival there Francis welcomed and greeted each person individually. They greeted him with sunflowers, which he immediately took and placed on the altar of the chapel in Santa Marta.

He then invited the eight guests to join him for breakfast in the dining hall of Santa Marta where he usually eats, and then sat down and chatted with each one as they had breakfast. At 7:45 a.m., Francis bade them farewell by giving them Argentine cookies, and then set off for the Pauline chapel in the Apostolic Palace to celebrate mass with the cardinals that are resident in Rome and the most senior Vatican officials.

The Dean of the College of Cardinals, Angelo Sodano, welcomed him at the start of mass in the name of the cardinals of the Roman Curia, saying they had come to be close to him on this special day and to celebrate the mass with him. He said he was sure that today, “as in a film,” he would remember the faces of his parents, Mario and Maria Regina and his siblings would pass and the many other people who had been close in life, right up to March 13, 2013, when the cardinals in conclave chose him to be the Successor of Peter. He said they had come to celebrate the Eucharist with him “to thank the Lord for having chosen you for this mission, and for all the love with which you are carrying it out every day.” Cardinal Sodano concluded by wishing him to continue in this ministry “Ad Multos Annos” (“For many years”).

In his homily, Francis recalled that today the Advent Liturgy invites us to stop for a moment as we draw near to Christmas, and “see what the Lord has done for us, for the Church, in the history of salvation.”

“Today we stop, we look back, we see that the journey hitherto was beautiful, that the Lord has not deluded us, that the Lord is faithful,” he said. “But we also see that both in history and in our own life there have been beautiful moments of faithfulness and bad moments of sin. But the Lord is there, with outstretched hands to raise you up and say, ‘Go ahead!’ And this is the Christian life: to go forward, to the definitive encounter (with the Lord).”

At the end of mass, Francis thanked all present for accompanying him in this celebration on this special day, and then revealed that “for some days now one word, that seems ugly, keeps returning in my mind: old age.” But then he recalled that, after his election, at his first meeting with the cardinals on March 15, 2013, he told them: “Old age is the seat of wisdom.” Today he added, “Let’s hope that it will also be so for me.” Moreover, he said, “when one thinks of it as a stage of life that is to give joy, wisdom, hope, then one begins again to live.”

As at that first meeting with the cardinals, so too today he quoted the German poet, Friedrich Holderlin who said, “Old age is tranquil and religious.” Francis, who is enjoying good health and looking very well, concluded by asking the cardinals present: “Pray therefore that mine too will be like that: tranquil, religious and fruitful, and, also, joyful!”