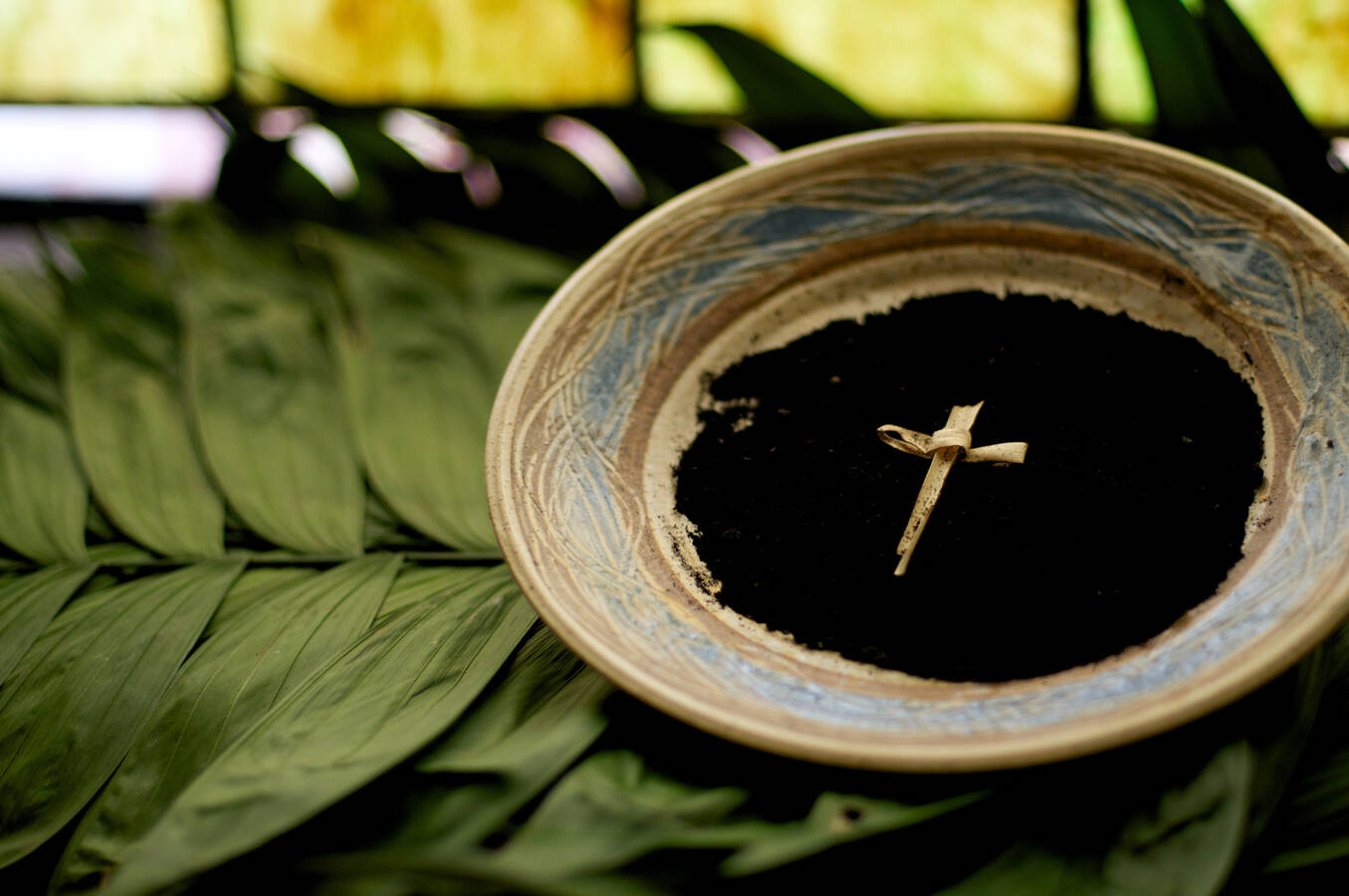 A Jesuit guide to Lent

Prayer, fasting and almsgiving are considered the three pillars of Lent. Over the years, America has published hundreds of articles that explore how these fundamental Christian practices can deepen our relationship with God during the season of Lent. We have collected some of our favorite articles as a resource for your prayer and reflection as we journey together toward Easter over the next 40 days.

A Jesuit’s Lenten pilgrimage through the station churches of Rome
By Anthony R. Lusvardi, S.J.
If all the church’s worship should be thought of as a journey, Lent involves achieving platinum frequent flyer status. In the great urban centers of the early church, in fact, Lent meant a bit of a workout.

Here’s why Catholics are called to think about death—daily
By Sister Theresa Aletheia Noble
Lent is a perfect time to begin trying out the practice of meditating on death daily. It can sound intimidating and morose, but remembering death actually helps us to grow in hope and become closer to God. Encouraged by countless saints, memento mori is a path of penance that leads to dazzling light.

How Eastern Orthodox's ‘Forgiveness Sunday’ could save us from our Facebook feeds
By Julie Schumacher Cohen
In the Eastern Orthodox tradition in which I worship, the season of Lent begins with a “Forgiveness Vespers.” At the end of the service, each member of the community proceeds to the front of the church to exchange with the priest and fellow parishioners—the whole church—a plea of repentance.

Lenten tips from a daily Mass rookie
By Richard Barry
If I had adopted a paleo diet for Lent, after 40 days of raw kale and rabbit meat, I would have found myself a few pounds lighter and easing trimly into my Easter Sunday suit. Attending daily Mass, however, provided no obvious metric of my progress. I needed a spiritual Fitbit to wear on my wrist to track inner growth. Lacking such a device, I turned to my fellow parishioners.

What my 5-year-old taught me about prayer during Lent
By Emily Dagostino
In front of the altar on Ash Wednesday, I closed my eyes as the minister’s thumb traced an ash cross on my forehead, telling me, “Repent and believe in the Gospel.”  The Gospel is an outrageous story. It is irrational to believe. Today, I will believe anyway. I will embrace the story unfolding in this season and unfolding every day in my life: a story of opportunity and renewal.

Spending Lent with Alexa
By Thomas Reese, S.J.
I am becoming so dependent on my electronic gadgets like Alexa, that I probably should give her and my other electronic attachments up for Lent. That would be a real penance!

Lent is just not what it used to be
By John Conley, S.J.
Lent is not what it used to be. Fasting and abstinence have been reduced to a minimum. Crowds for weekday Mass and seasonal devotions have ebbed. Few Christians renounce the theater and the cinema in a spirit of penance. Still, Lent remains our great ascetical season, one part Jenny Craig, three parts Stoicism and six parts Gospel.

I fasted on only bread and juice for Lent. This is what I learned.
Luke Hansen, S.J.
Fasting always sounds like a brilliant idea before the consequences hit home. Having lost some control over my bowel movements, I felt vulnerable and fragile. I was afraid. Was it really worth it? Would I make it the full 40 days?

What Catholic leaders should give up for Lent this year
By Luigi Gioia, O.S.B.,
With the beginning of Lent, we are all called to focus on one of the spiritual aspects of the sexual abuse crisis that underpins all the others: namely, the tragic failure to see.

Fighting homelessness on L.A.’s Skid Row with a Lenten fast
By Kaleb Havens
Day 29 and already my hands look like a seasoned coal miner’s. Tightly packed tents line the street I chose for my fast from food and shelter during Lent to suffer with the residents of Skid Row.

Why Catholics fast: searching for the tradition
By Carole Garibaldi Rogers
At a friend’s home a few years ago, I sat across the dining table from a Muslim woman who had been born in Egypt and had lived in many cities around the world. Ramadan had recently ended; Lent would shortly begin, and fasting became a topic of conversation.

Will Lent resonate with Americans open to Dry January, juice cleanses and CrossFit?
Editorial from 1978
With the breakdown of the Catholic ghetto and the subsequent emphasis on pluralism, the distinctive quality of Lent as a season set apart tended to meld into the bland amalgam of the American Christian mainstream. Embar­rassed by some of the excessive rigidity and legalism of the past, many Catholics abandoned the traditional practices of Lent.

Fasting: a fresh look
By Thomas Ryan, C.S.P.
Have you ever tried to explain the Catholic regulations on fasting to a Muslim, a Jew or a Hindu? Save yourself the raised eyebrows of incomprehension or the smirk that says, “You’ve got to be kidding!” Somehow “one full meal and two lesser ones not equaling it” doesn’t cut it in the eyes of adherents of other world religions.

A mercy-filled Lent
By Kerry Weber
The feeling can best be described as last-minute, Lenten panic. It typically hits in those final hours of Mardi Gras, when it dawns on me that I must soon settle on a Lenten sacrifice. And then, moments later, my worry quickly subsides as I fall back on that old favorite—forgoing sweets—and tuck in to a pre-Lenten bowl of ice cream as though it were my final meal in prison.

Pope Francis says give to the homeless, don't worry about how they spend it, as Lent begins
By Michael J. O’Loughlin
“There are many excuses” to justify why one does not lend a hand when asked by a person begging on the street, the pope said. Some may think, “‘I give money and he just spends it on a glass of wine!’” Francis said. But, he joked, a “glass of wine is his only happiness in life!”

A farewell to alms?
By John P. Langan, S.J.
Charity is a book that gives away with one hand even while it takes back with the other. On the one hand, the book underlines the urgency and the prominence of almsgiving in both patristic Christianity and rabbinic Judaism.

Ash Wednesday tells us: It is never too late to change your life
By the Rev. Terrance Klein
Life does not have to be this way. You don’t have to be this way. This is what the ashes say. You can begin again. You can be a new person. What you require, all that you require has been here all along. You need only return to the mystery of your own baptism.

Lenten penitence and our reckoning with gun violence
By Karen Park
There has been a change in this country, a kind of turning and a reckoning with our gun sickness, and it has taken place during the liturgical season of Lent. The massacre at the Marjory Stoneman Douglas High School took place on Ash Wednesday, and the national March for Our Lives happened on Saturday at the outset of Holy Week.

Sin and ash: On our collective guilt and the need for reconciliation
By Brianne Jacobs
In theology we speak of structural or social sin. This is opposed to the way we usually think of sin asindividual. With individual sins, I have complete control over my answer. No, I did not cheat. No, I did not gossip. Not so with social sins.

This Lent, I’m giving up swearing
By Renée Darline Roden
I was off to a flying start until the [redacted] scanner in the library where I was copying a book for class flubbed the 150-page scan job I had just completed. As I reflexively dropped my first four-letter word of the day, a profane interior rebuke to myself followed closely on its heels. All this even before Ash Wednesday Mass. Darn.

Ashes mark the frontier
By Edward W. Schmidt, S.J.
At the Jesuits’ general congregation in 2008, Pope Benedict told the Jesuits to go to the frontiers. Father General Adolfo Nicolás has repeated the challenge. By implication, Jesuit schools and other ministries are called to be out there on the edges. Those young faces I saw along Halsted Street on Ash Wednesday, were they showing that we had done our job? Or were they a healthy push to do much more?

The time I rubbed off my ashes
By Joseph McAuley
Ash Wednesday is one of my earliest memories of church-going. In my toddler and childhood years I went with my mother, Ellen, to my parish church, St. Nicholas of Tolentine, in observance of the various feasts and holy days. I remember it quite well, my first Ash Wednesday. At the time my family lived in the Bronx in one of those stately old buildings, a five-story walk-up—and we lived on the fifth floor.

Parochial and political - not for me.