Pope Francis says give to the homeless, don't worry about how they spend it, as Lent begins 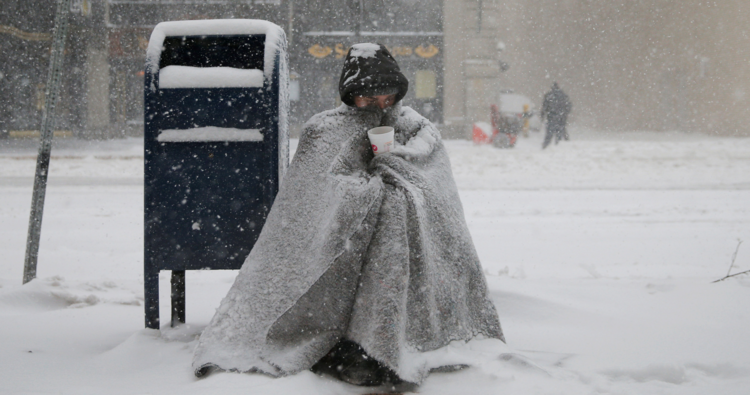 As the debate over the appropriate response by rich countries to the global refugee crisis barrels on, Pope Francis said in a new interview that Catholics should offer housing or financial assistance to families settling in a new country, and, as Lent begins, he called on Catholics not to make excuses when it comes to giving to those asking for change.

“Here in the Vatican there are two parishes, and both are housing Syrian families. Many parishes in Rome have also opened their doors and others, which don’t have a house for priests, have offered to pay rent for families in need, for a full year,” he told “Scarp de’ tennis,” a magazine run by the homeless and socially excluded in Italy.

Some critics of the pope have derided his stance on refugees, claiming that the Vatican is a walled city (it is not) or that he only talks about helping migrants instead of directly assisting them (he has).

Earlier this month, for example, the right-wing news outlet Breitbart posted a tweet criticizing Pope Francis for his stance toward migrants, accusing the pontiff of hypocrisy:

How many refugees are living inside your walls bruh https://t.co/i0a8Q7kxwm

“How many refugees are living inside your walls bruh,” read the tweet, which linked to a Breitbart story about a speech given by Francis in which he called for greater protections for migrants.

The interview was published on the eve of Ash Wednesday, which for Catholics and other Christians is the start of Lent, a season of penance and almsgiving. Francis said giving to the needy must be a priority—and challenged those who make excuses against giving money to people on the streets.

People who worry about how the money might be spent should ask themselves what guilty pleasures they are secretly spending money on, Pope Francis said.

"There are many excuses" to justify why one does not lend a hand when asked by a person begging on the street, he said. Some may think, “‘I give money and he just spends it on a glass of wine!’” Francis said.

But, he joked, a “glass of wine is his only happiness in life!”

Giving something to someone in need "is always right," the pope said, adding that it should be done with respect and compassion because "tossing money and not looking in [their] eyes is not a Christian" way of behaving, he said.

‘In the shoes of the other, we learn to have a great capacity for understanding, for getting to know difficult situations.’

During his interview with the magazine, whose title means “Sneakers” in English, Francis talked about the importance of being able to walk in other people’s shoes.

“In the shoes of the other, we learn to have a great capacity for understanding, for getting to know difficult situations,” Francis said.

Later in the interview, the pope talked about the importance of ensuring that new arrivals are given opportunities to integrate into the culture. He said that the 13 Muslim refugees he brought back aboard the papal plane to Rome from Lesbos last year have found work and enrolled in classes. (A report from The Guardian confirms the pope’s account.)

According to a summary of the interview from Vatican Radio, Francis highlighted Sweden as a model for other countries to emulate.

When the pope talks about immigration, he's talking about the US, too
Cindy Wooden - Catholic News Service

Pope Francis to activists: Stand with migrants, do not deny climate science, there is no such thing as ‘Islamic terrorism’
Michael J. O’Loughlin

“During his own life, in the difficult years of the military dictatorship in Argentina, the pope often looked to the Swedish as a positive example of integration,” the report says.

Immigration issues in Sweden burst onto the world stage on Feb. 18, when President Donald J. Trump called out the nation during a rally in which he made the case for stronger immigration laws in the United States.

"You look at what's happening last night in Sweden," Mr. Trump said. "Sweden. Who would believe this? Sweden. They took in large numbers. They're having problems like they never thought possible."

Political leaders in Sweden were perplexed, pointing out that there were no major incidents on the night Mr. Trump referenced. The president later backtracked, tweeting that he was responding to a Fox News report about crime in Sweden, not a specific event.

While a person who has no home may take the money you give them
to buy a meal or have a glass of wine, they may also use it to buy the
very drugs they need to stay off of.

A young woman asked me for a few dollars to buy some food. I was afraid she'd use the money badly. I told her I'd take her to a pizza place. She went with me and I bought her a few slices and a soda. But I wouldn't just give money to her. Henry is right.

It took a lot of convincing from knowledgeable friends who are in drug counseling and social services to learn that it's not always the right thing to give money to people who ask for it. I now give food, clothing, a ride, or information about local shelters (and will even walk someone there if they don't know the way).

The number of homeless in NYC increased 20% last year, attaining the highest level since the 1930's. The primary causes of homelessness are a shortage of housing and mental illness.

Once again the anti-Trump media and his detractors hear something that President Trump did not say, he made no mention of a terrorist attack in an ill-stated remark about Sweden. Any reputable media source would have first asked the White House to clarify his statement before jumping to a false conclusion and would have checked the situation in Sweden with its refugee dominated areas ,as in Malmo, that are NO-Go zones where police, fire and emergency services refuse to go. The FOX News report highlighted the real situation in Sweden which the MSM ignores.

Mr. O'Loughlin is apparently unaware of what has come out about Sweden since Trump's remark. There has been several stories about how dysfunctional Sweden has become in recent years as they have covered up their major crime problem.

Maybe the Pope might want to select a different country. Oh, wait there is no other country that is a good example.

Sure there are. Just refer to the many countries that rank higher than the US in various indices that deal with wealth distribution, crime, housing, education , etc. (e.g. Good Country, Sustainable Society Index, Social Progress Index, OCED Better Life Index, Human Development Index).

Here's a fact: we aren't at the top of these lists--not even close.

I was not pushing the United States but disputing Sweden as a good country to single out as a haven since they have serious problems with immigrants.

Second, but as you point out I would suggest the Pope and the Jesuits direct all the Mid Eastern, African and Latin American refugees to these better countries than the United States. It seems cruel for the Jesuits or the Pope to want them to come here.

Trump would love this as a solution and so would most Americans. Glad you pointed it out.

Compared to other countries, not that many are coming here in the first place! I suppose all those refugees who are STEM folks--and there are many--will build up another country's economy, not ours.