Here’s why Catholics are called to think about death—daily 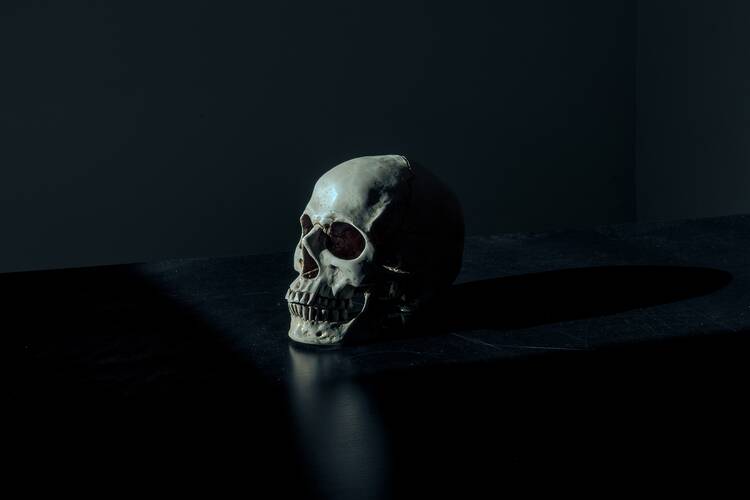 Photo by Mathew MacQuarrie on Unsplash

I have a skull on my desk. Procured from a fellow religious sister’s Halloween supplies, the small ceramic skull is my memento mori, a reminder of my inevitable death. When I acquired the skull, I had only a vague understanding of the history of meditating on death in my own religious order and in the Catholic Church. But I learned more as I began to tweet about my journey each day on social media. What I thought would be just a couple weeks of tweeting about meditating on death ended up lasting over 500 days.

Thousands of people have joined me on my memento mori journey. Many people have bought skulls for their desks and begun meditating on death. Some have even begun to affectionately call me “Sister Death.” But not everyone is comfortable with this type of spiritual practice. I have heard from Catholics who think it is just a strange new fad that borders on the demonic. I understand their concern. What I’m doing is a little strange, but it is not new and it is definitely not demonic.

Memento mori, Latin for “remember your death,” has long been associated with the practice of remembering the unpredictable end of life.

Memento mori, Latin for “remember your death,” has long been associated with the practice of remembering the unpredictable end of life. The spiritual practice of memento mori and the associated symbols and sayings were particularly popular in the medieval church. But the tradition of contemplating one’s mortality in order to live well is deeply rooted in salvation history. After the first sin, God reminded Adam and Eve of their fate: “You are dust, and to dust you shall return” (Gn 3:19). God’s warning is the first of many such reminders in Scripture. The psalmist prays, for example, “Teach us to count our days aright, that we may gain wisdom of heart” (Ps 90:12). In the New Testament, Jesus exhorts his disciples to pick up their crosses daily and to remember their death as they follow him to the Place of the Skull: “If anyone wishes to come after me, he must deny himself and take up his cross daily and follow me” (Lk 9:23).

The practice of remembering death may sound grim, but not so long ago, it was considered an essential part of the Christian tradition. Early Christian writers and countless saints refer to the importance of remembering death. In his Rule, St. Benedict exhorted his monks to “keep death daily” before their eyes (4.47). Following this advice from Scripture and tradition has strengthened my faith and transformed my perspective in a way that has influenced my everyday choices. For example, I regularly follow the advice of St. Ignatius Loyola to imagine myself on my deathbed before making a choice. Doing so has not filled me with fear but rather the opposite. I fear death less and make choices for heaven more.

Thinking about your death will make you a better Catholic
Jesuitical

Unfortunately, the spiritually fruitful practice of meditating on death has gone by the wayside in the past century. As early as 1954, Blessed James Alberione noted that people were losing interest in the practice of meditating on what are commonly called the Last Things, including death. Speaking to members of my religious order, the Daughters of St. Paul, he said: “Nowadays there is little human respect for meditating on the Last Things. They say it is no longer modern to meditate on them. It seems to me, however, that death is always modern. It is active every day!”

Lent is a perfect time to begin trying out the practice of meditating on death daily. It can sound intimidating and morose, but remembering death actually helps us to grow in hope and become closer to God. Encouraged by countless saints, memento mori is a path of penance that leads to dazzling light. Through meditation on death, we pick up our crosses and walk with Jesus to the Place of the Skull. But our journey does not end there. We follow Jesus to the cross so that we may experience more profoundly the light of the Resurrection in our lives. 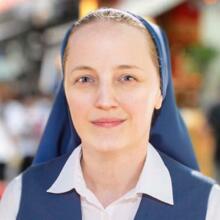 Very good article, its all about our life. Anything can happen to anyone at anytime. etechsure Thanks lot for this amazing article

Your message is important, Sister Theresa. Skulls are not for everyone but praying the "Hail Mary" attentively will keep the reality of death before our minds. This is not morbidity! A "dead line" keeps us alert to God's call in the "now" so as to be truly alive and not take life for granted.

I always believed Our Lord was calling us to a healthy life in spirit, body, and mind. We always realize the possibility of instant death but it is unhealthy to dwell upon it especially if it is at the expense of the living. (Skulls on the desk! This is why so many others consider Catholics to be kinda weird.)

Yes, Jesus came that we might have life, and have it abundantly. And his life passed through death and on to resurrection. We are promised the same. All of us will die, not all by "instant death" but in various manners and modes and times. The denial of this fact is all around us--the lengths we will go through medically to prolong our existence just a little longer, the refusal to write our wills and advance directives, the silence imposed around the last months, weeks and days of a loved one's life rather than a loving and honest farewell. The denial is not healthy. Remembering that we are dust, that our earthly lives will end, that our days are truly numbered and limited, gives us an appreciation of every day of life and teaches us wisdom. Carry on, Sister!

"Today for me - Tomorrow for you" - is boldly engraved out here on the entrance of our cemetry.

Now finishing my 91st year. I started on my 75th birthday to pray daily for "a happy and holy death." A GRATEFUL AND HAPPY PRIEST.

Having attended many deaths, I can tell from experience that for almost everyone it lasted for about one minute to many months of terminal decline and was over; just a fraction of most lives.
Take your lead from the liturgy - ONE DAY, Ash Wednesday, we focus on our own personal death. One day in three hundred and sixty five. That is about as much as it is worth. One day a year.

Are you looking for a career opportunities? You should take a look here and read closely.