This Lent, I’m giving up swearing 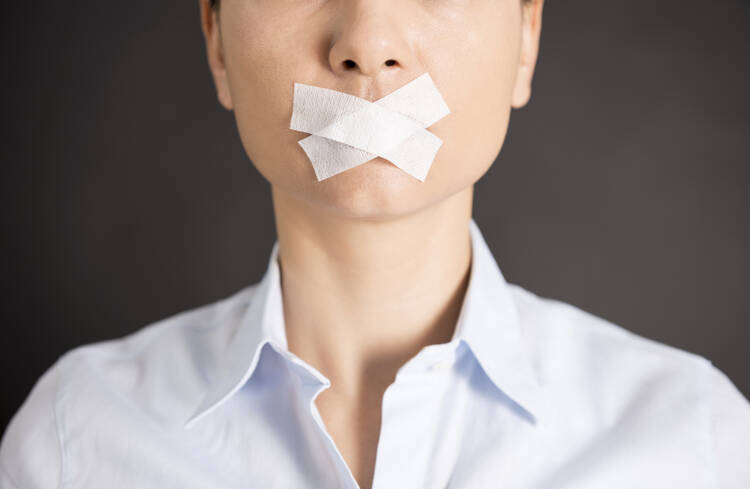 Over our Fat Tuesday dinner this year, my friend Jenna and I discussed our potential Lenten sacrifices. “I’ve been thinking of giving up swearing,” she mentioned tentatively. I promptly laughed. I had attempted that before. I made it a cool 30 minutes after Ash Wednesday Mass, ashes still freshly crossed upon my forehead, before dropping an F-bomb. I threw in the towel immediately and returned to my regular Lenten discipline of giving up chocolate.

In a spirit of solidarity, however, I promised Jenna that if she decided to fast from four-letter words, I would join her—silently hoping that she would choose to simply forego Netflix instead.

As Ash Wednesday dawned, I woke up to an optimistic text: “I'm swearing off swearing. Let’s goooo.” My interior response blended Edvard Munch’s “The Scream” with that crying emoji that has torrents of tears streaming down its face, but I steeled my soul, took up the dare and responded with a chipper: “O.K.! Let’s do it!”

Swearing can often function as a shield against more honest emotions, a cool façade of indifference.

I was off to a flying start until the [redacted] scanner in the library where I was copying a book for class flubbed the 150-page scan job I had just completed. As I reflexively dropped my first four-letter word of the day, a profane interior rebuke to myself followed closely on its heels. All this even before Ash Wednesday Mass. Darn.

To clear up any false impressions: I am a hearty proponent of exercising a full, colorful range of vocabulary. I have no moral qualms about employing the necessary language to help pack the right verbal punch or to fully flesh out the emotional landscape of a story for my audience. As my friend Jenna pointed out, however, swearing can often function as a shield against more honest emotions, a cool façade of indifference. Alternatively, swearing can at times privilege a spewing of emotions over thoughtful and honest communication.

As I took up this new Lenten challenge, the difficulty of expunging coarse language from my habits of speech—both mental and verbal—caused me some small alarm. Why is it so difficult for me to extricate these words from my daily parlance? I wondered. I noticed how quickly I reached for a strong word when hurt, when angry, when frustrated. By attempting to halt that instinctive grab for a convenient verbal crutch, I began to notice how frequently my reactions consisted of hurt, anger or frustration.

The words I use can either obscure the larger landscape of reality or invite me into it.

After a week of struggling to censor myself and consistently failing, I spoke with a priest about the seamy emotional underbelly my failing Lenten project had uncovered. The priest offered for my consideration his favorite definition of humility: Humility is living in truth. Humility is not the practice of putting ourselves down but realistically assessing our own gifts and weaknesses. It motivates us to live in accord with the way things are, not in the way we would wish them to be. Inviting us to live with an empathic eye for our neighbor’s story, humility welcomes us into a greater vision of reality, more vibrant, open and comprehensive than our own story. We calibrate our minds and hearts to reality through the words we employ.

The quick, angry label I slap on the classmate who irritates me trains me to treat them in a disdainful way, perhaps not in accord with the reality of who they are. Cursing when a person offends me blinds me from seeing them as anything other than the offense given. My own profanely expressed frustration with myself can overtake my ability to see myself as someone good, capable of doing good for others. Emotional responses are often valid and warranted, but just as often, they are out of proportion with the reality before us.

In order to respond appropriately in my actions I must begin by responding appropriately through my words. The words I use can either obscure the larger landscape of reality or invite me into it. By seeking this Lent to let go of my ingrained verbal habits and instinctive emotional reactions, I can begin to consider others from outside of my own limited point of view. I can try to see them from the perspective of truth, through the eyes of God. Seeing with the eyes of God means being invited into the world beyond my own perspective of small annoyances, slights, disruptions and inconveniences and seeing a world of fellow humans also seeking grace.

This new frame of reference recast my Lenten discipline as a journey not only to bring the dialogue of my life down to a P.G. rating but also to let both my vision and my actions more closely reflect the reality of grace.

I still love to salt my language with a few choice words. And, of course, there will always be heightened emotional situations where an expletive serves as a steam valve for sizzling emotions or lands a punch line for a joke. But, just as I set aside my precious stash of Dove Chocolates, I am putting my favorite four-letter words back in the pantry until Lent is over. In the weeks to come, I will try not just to clean up my language for family Easter dinner but attempt to see—and speak—the truth in love.

Renée Darline Roden is a master’s student in theology at the University of Notre Dame by day and a playwright by night. She blogs about the sightings of grace in her life at Sweet Unrest.

Your connection between "swear words" and shielding our true emotions makes sense. And we would do well to unmask the emotions and dispositions that underlie our "salty" language too. But I think the justification of some profanity (etymology-out side the temple) most unwise. The interconnection between words, ideas and dispositions is clear. If I feed irreverent responses with scatological , sexist, abusive language I will be nurturing irreverent dispositions. Men often use derogatory, sexist terms for women as a way of defending their own egos from rejection. The term affects the attitude. Sirach 23: 15 has a profound maxim: "A man who has the habit of abusive language will never mature in character for as long as he lives." (New American Bible)
It's most instructive in this regard to consider why Religious Orders consider the discipline of silence of primary importance. No doubt it's connected with developing a prayer life. but in addition it's a way of learning to speak only with charity. As St. James says: "If any one does not fall short in speech he is a perfect man, able to bridle his whole body also." (James 3:2)