A Farewell to Alms?

Charity is a book that gives away with one hand even while it takes back with the other. On the one hand, the book, written by a Scripture scholar who is the Hesburgh Professor of Catholic Theology at the University of Notre Dame, underlines the urgency and the prominence of almsgiving in both patristic Christianity and rabbinic Judaism. He uses his profound knowledge of the relevant texts from Ben Sirach and Tobit. He is intent on showing that almsgiving is not to be understood along the lines of obedience and reward or punishment employed in the Deuteronomic theology. He gives a central place to charity, which in his account is centrally almsgiving to the poor, which is an expression of faith in God and his providential ordering of the universe rather than an expression of the moral state of the giver.

The problem he works to resolve is the need to avoid the works-righteousness that Protestantism found in the connections medieval Catholic theology made between the practice of almsgiving and the gaining of indulgences, even while affirming the quasi-substantial character, the “thingness” of the good deeds of the righteous, which are stored in a heavenly treasury. He even entitles the second part of his book, “Charitable Deeds as Storable Commodities,” an exercise in reification that seems neither sophisticated nor plausible.

Anderson has interesting treatments of the story of the rich young man (given in parallel forms in Mark 10, Matthew 19 and Luke 18) and the account of the last judgment in Mathew 25. He also connects almsgiving with fasting, both of which he sees as petitionary exercises rather than as penitential discipline for the sins of the giver. It is appropriate and enlightening that in the reconciliation of divine freedom and human merit Anderson gives the final word to St. Augustine, who saw both at work in the final moments of the life of his mother, St. Monica. “Divine freedom is never compromised. But neither are Monica’s charitable deeds.”

Anderson’s book is unquestionably learned, insightful and occasionally provocative. At the same time, it is both a sign of hope and a disappointment. For this reader, the sign of hope is the extensive use that Anderson, like an increasing number of Christian scholars, makes of Jewish sources for unfolding the meaning of the New Testament, which clearly has its roots in the Jewish religious world. With its careful use of Jewish sources and its watchful eye for Protestant theological concerns, Charity is an encouraging work of interreligious scholarship.

The disappointment has to do with Anderson’s neglect of social and economic history. Despite the subtitle of the book, “The Place of the Poor in the Biblical Tradition,” very little is said about the changes in the condition of the poor, about economic practices and institutions in ancient Israel and the Roman Empire, about the factors that may have led to the need for repeating and intensifying the call to almsgiving.

Even less is said about the difficulties that confront modern Christians as we attempt to interpret and apply the biblical teaching on almsgiving and its complex relationship to economic justice. I mention this not to chide the author for failing to write a quite different book but to advise readers about what is likely to be a source of disappointment for those approaching the topic in a more activist or liberationist spirit. It would be illuminating if Anderson were to pose to his colleagues at Notre Dame the question of how the argument of his book should be connected with the sense of institutional life and history that is so powerful within Catholicism.

This article also appeared in print, under the headline “A Farewell to Alms?,” in the November 18, 2013, issue. 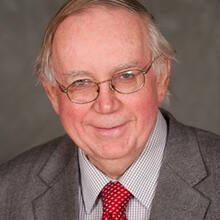 John P. Langan, S.J., is in the philosophy department at Georgetown University.