Fighting homelessness on L.A.’s Skid Row with a Lenten fast 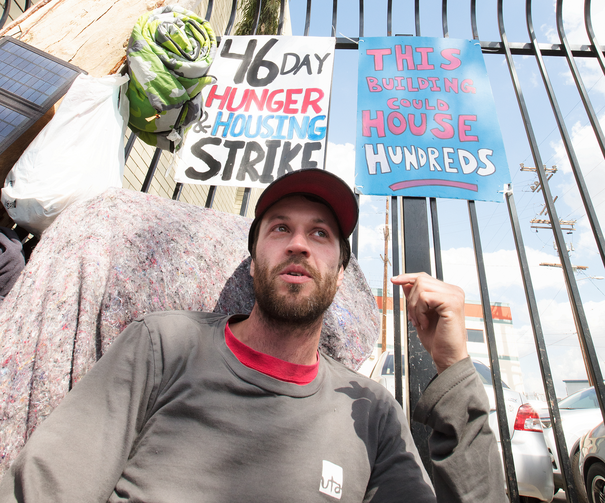 Kaleb Havens has spent the entirety of Lent chained to a fence on Skid Row in Los Angeles to draw attention to the homeless. (Photo courtesy of Victor Alemán/vida-nueva.com)

Kaleb Havens has spent the entirety of Lent chained to a fence on Skid Row in Los Angeles. He has been fasting since Ash Wednesday, consuming only water and broth from chicken bones. The 30-year-old has been living on the streets to draw attention to L.A.’s homelessness. He argues that the city is not doing enough to address the escalating number of homeless individuals.

Mr. Havens, who served at the Los Angeles Catholic Worker, charges his cell phone with a small solar panel. He wrote a short reflection on pad and paper, took a picture of it, and sent it to America to share with our readers.

Day 29 and already my hands look like a seasoned coal miner’s. Tightly packed tents line the street I chose for my fast from food and shelter during Lent to suffer with the residents of Skid Row. My time at the Los Angeles Catholic Worker has brought me in touch with many experiencing homelessness, but I had not yet learned how quickly the elements take their toll, nor the panic when nature calls in a neighborhood with nine public restrooms shared between 5,000 people overnight.

Sometimes Christians ask what they can do but often are not ready for the answers.

When my 46 days are over, unless our mayor and city council have voiced support for Skid Row’s demands to city planning before then, I will unchain myself from the old Salvation Army center on Fifth Street that once helped so many and return to the comfort of my home. The neighbors I have come to know will continue running small businesses, fixing bikes and selling snacks out of their tents. They will continue to be herded like cattle by police, ignored by underfunded services and occasionally fed or clothed by a Christian but rarely healed or sheltered.

Sometimes Christians ask what they can do but often are not ready for the answers. The mere thought of opening one’s home or place of worship as a shelter may seem impossible to many readers. Voting or agitating leaders to improve services seems pointless to many, or possibly not in-line with your personal politics.

Jesus’ stance could not have been clearer: Give not just what you think you can spare but everything. Give and you will be given back 10-fold. Saying, “Jesus loves you” means a lot more when wedded to living out his teachings. It means a lot more when your doors and arms are open and you’re meeting their eyes and asking their name. 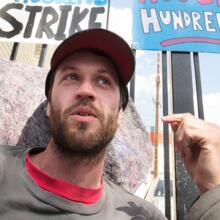 Kaleb Havens is a member of the Los Angeles Catholic Worker community.

Rescue Mission in my City just finished building a large apartment building 45 apartments workforce apartments affordable to individuals and small families with total household income at or below 50% of area median income including 11 permanent supportive housing apartments for the homeless, those at risk of homelessness, and/or formerly homeless individuals or small families.

I found it engrossing, artistic, emotional, and an inspiration to go back and read Acts again. I hope people will seek it out. best asian food near me It would be a good movie to show to church gatherings, particularly Bible study groups.