A Jesuit’s Lenten pilgrimage through the station churches of Rome 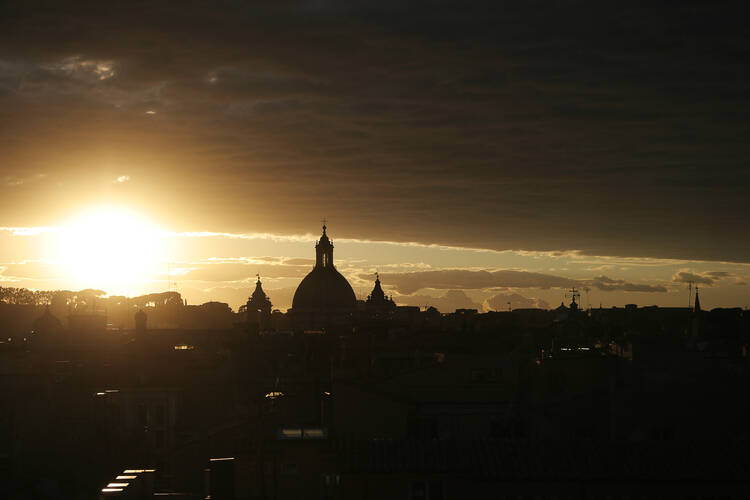 To worship means to move: to ascend the holy mountain, to tread the pilgrim path, to stand, to sit, to kneel. Today—all comfy pews and padded kneelers, folksy sermons and earth tone carpeting—liturgy too often becomes something like a religious documentary: a bit dull, perhaps, but something we still really ought to see. It was not so in the beginning.

The Gospels are always mentioning Jesus going up to Jerusalem—up because of the holy city’s notable change in altitude. Once there, the steps to the temple—still visible today—would also have exercised the quads. In Europe, American visitors are often surprised to find ancient baptisteries built apart from churches; Christian initiation, in other words, once required at least a few steps across the piazza. Roman-era churches were sometimes laid out in three distinct sections: the first, open to all, for the liturgy of the word; a baptistery in the middle; and an inner sanctuary for the celebration of the Eucharist, open only to those who had passed through the first two. Baptism, it goes without saying, involved more than a drop of water on the head but descent into a pool sufficient for dunking before re-emerging, sopping wet with grace.

Lent always seems to arrive unexpectedly. It shouldn’t, of course—it is clearly marked on the calendar—but each year I feel like I should have prepared some better plan for spiritual growth ahead of time or at least gotten an extra helping of salami in on Tuesday night. Maybe Lent arrives with a jolt because it starts mid-week. Thursday, Friday and Saturday of the current week of Ordinary Time are simply abandoned, like the liquids and gels you forgot to take out of your carry-on at the security checkpoint. No wonder the Bible contains all those parables about wise and foolish virgins, oil lamps and unexpected knocking at the door.

To worship means to move: to ascend the holy mountain, to tread the pilgrim path, to stand, to sit, to kneel.

In Rome, there is a clear sign of Ash Wednesday’s approach. On the Aventine Hill, where I am taking classes from the Benedictines in sacramental theology, the city workers trim the grass and the litter disappears. Not quite a miracle but a prudent bit of public relations—no foolish virgins, these Italian public employees—because the pope kicks off Lent at the ancient station church of Santa Sabina atop the Aventine. And one does try to cut a bella figura for the pope.

If all the church’s worship should be thought of as a journey, Lent involves achieving platinum frequent flyer status. In the great urban centers of the early church, in fact, Lent meant a bit of a workout. During that fruitful interlude between Constantine’s legalization of Christianity in 313 and the dismemberment of the Roman Empire by Visigoths and Huns a few centuries later, Lenten liturgy was “stational.” In other words, it moved. Daily liturgies followed an itinerary of holy sites across the city. Jerusalem’s Holy Week liturgy was paradigmatic, literally following the footsteps of the Lord. The stational liturgy destined to have the widest and longest-lasting impact, however, was Rome’s.

By the third century, the caput mundi boasted perhaps 30,000 Christians, according to John Baldovin, S.J., whose The Urban Character of Christian Worship remains the definitive work on stational liturgy. These Roman Christians were a diverse lot: aristocratic and working class, locals and expats residing in the capital, Christian families and recent converts. Heresy—Gnosticism of all varieties—was on the prowl, and stational liturgy helped the bishop keep his flock united.

If all the church’s worship should be thought of as a journey, Lent involves achieving platinum frequent flyer status.

At first, stational liturgy centered around the bishop, who each day personally presided at a different church in a different part of the city. Each neighborhood got its day in the sun, and Christians were reminded of the universality of the church. To be sure, not all of Rome’s Christians turned out for every liturgy; in Constantinople, St. John Chrysostom blamed the circus and the theater for his Christians’ spotty Mass attendance.

Other liturgical seasons, such as Christmas, also involved stational liturgy, but Lent’s 40-day itinerary was the most developed and destined to have the greatest impact. Baldovin notes that the monasteries of northern Europe were built to allow some replication of stational liturgy. Even after the practice had fallen into disuse, the Latin Missal still noted the Roman station church for each Lenten weekday; the daily prayers and readings often enough made oblique reference to that church’s location or its noteworthy relics. The practice favored the development of street processions, which European immigrants brought with them centuries later to America’s ethnic neighborhoods.

Rome’s stational liturgy flourished under Leo and Gregory the Great. But then came a few centuries of popes who were, well, not-so-great and could not be bothered with the niceties of Lenten liturgy. For most of the 14th century a few could not even be bothered to live in Rome. Jerusalem and Constantinople meanwhile fell to Islam, and stational liturgy survived only in manuscripts and obscure notations in the Roman Missal.

When the opening antiphon sounds the basilica is full, and somehow centuries and continents have come together.

Stational liturgy started to make a comeback in Rome in the middle of the 20th century. After the state of Italy recognized the Vatican’s legal status in 1929 and the pope was no longer a “prisoner in the Vatican,” Pius XII granted indulgences to pilgrims visiting the station churches. The pope no longer visits each location—Santa Sabina on Ash Wednesday is the exception, not the rule—but local churches celebrate their day, holding processions, opening normally locked crypts for visitors, putting relics on display. Pilgrim groups from different nations take turns celebrating Mass in their languages.

On weekdays, English gets the 7 a.m. timeslot, and organization falls to the seminarians of the Pontifical North American College. This being a N.A.C. endeavor, the English Mass runs with a precision not seen in Italy since the Anzio landing, though a few times along the itinerary the seminarians have to make fraught calls to sacristans who have overslept.

Why travel if you aren’t going to get a little lost?
Anthony R. Lusvardi, S.J.

What Lenten pilgrims can learn from the martyrs of Rome
Anthony R. Lusvardi, S.J.

It is 2018, my first year as a priest, and I have resolved to keep my oil lamp primed: I will visit and concelebrate Mass at each of the station churches. With the danger of another Visigothic invasion having receded considerably, the greatest peril to this year’s Lenten resolution is oversleeping. Mardi Gras night I feel like I do before an international flight; I double-check that my purple stole is packed, triple-check my alarm. In the end, I arrive at Santa Sabina sweaty and way too early.

The basilica dates from the time of St. Jerome, the brick of its walls giving it an aura of monastic austerity. Thomas Aquinas prayed here, maybe even sat on the same stone bench. I am bringing with me prayers from another world, too: Over the summer, making my post-ordination victory lap of thanksgiving Masses, I collected prayer requests from parishioners and friends, and at each station church I carry one with me in my pocket. These friends, at home in the Midwest, become my traveling companions, along with the generations of pilgrims whose touch has worn grooves in the marble and the martyrs and apostles for whom the station churches are named and whose mortal remains are collected under the altars.

Above me Santa Sabina’s latticed windows float on columns and arches; they are made of selenite, a kind of crystal, instead of glass, and the dawn that breaks above the bricks is both soft and radiant. When the opening antiphon sounds—exactly on time—the basilica is full, and somehow centuries and continents have come together. Soon there will be ashes on our foreheads and all above us, light.

Editors’ note: This is the first article in a seven-part Lenten series on the station churches of Rome. Sign up for our America Today newsletter to receive a new article each Tuesday during Lent.

Sure sounds like a crazy journey. Glad it was completed safely!
Jill from Law Offices Of Durham and Ng