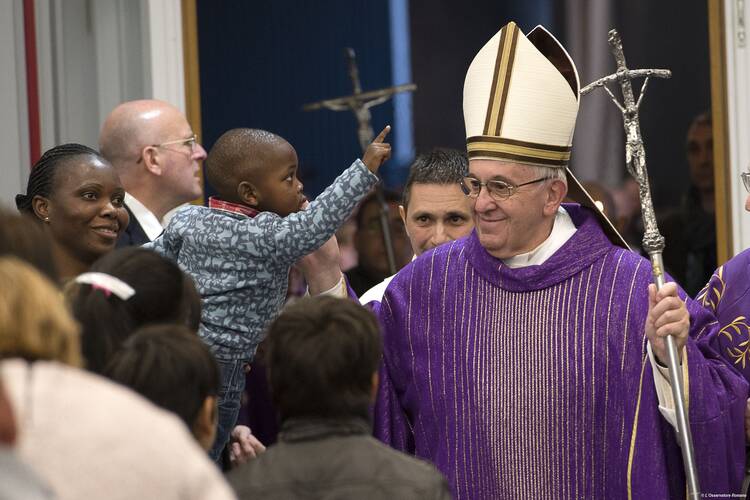 Pope Francis greets a boy during a visit to a Caritas center for the homeless near the Termini rail station in Rome Dec. 18. The pope opened a Door of Mercy at the center. (CNS photo/L'Osservatore Romano, handout)

The feeling can best be described as last-minute, Lenten panic. It typically hits in those final hours of Mardi Gras, when it dawns on me that I must soon settle on a Lenten sacrifice. And then, moments later, my worry quickly subsides as I fall back on that old favorite—forgoing sweets—and tuck in to a pre-Lenten bowl of ice cream as though it were my final meal in prison.

Pope Francis’ Lenten message, released in early February, suggests that I may need to take a more deliberate approach to sacrifice during this season. That his brief but powerful statement arrived a month prior to Ash Wednesday is not insignificant. This timing gives us a chance to digest the message before Lent begins, and to discern how we might prepare for the season. We are meant to approach Lent deliberately, to enter into it willingly and to reconsider how our own sacrifices might offer greater understanding of Christ’s sacrifice. And this process, in turn, is meant to extend into our daily lives long after Easter has passed. Giving up sweets can be a part of this process, but it shouldn’t be all of it.

Lent offers us a chance to consider prayerfully our relationship with God. And Scripture offers a few suggestions for how we might do this. Some of the most powerful are the corporal works of mercy. In the Gospel of Matthew, Jesus says that those who will inherit the kingdom are those who gave him food when he was hungry and drink when he was thirsty and those who visited him in prison. “Whatever you did for one of these least brothers of mine, you did for me,” he advised (25:40).

The corporal works of mercy are feeding the hungry, giving drink to the thirsty, clothing the naked, sheltering the homeless, visiting the sick, visiting the imprisoned and burying the dead. These actions are powerful for a number of reasons. One is that these works force us to recognize Christ in our neighbors—even in neighbors we may not like or may be wary of. They remind us that Christ is found in unexpected places and unlikely or vulnerable people. The works of mercy remind us that we must be open to the God of surprises.

Second, these works remind us that Christ works through us. We are called to reach out to others and, through God’s grace, to build the kingdom of God on earth. It is easy to think that we will do these things eventually, that we can start to serve others when work settles down or our lives become less busy. But the Lenten season calls us to make time now and to start, even in small ways, paying attention to where Christ leads us.

Third, the corporal works of mercy remind us that we can grow in our relationship with Christ by building up and being part of an active community of loving, giving people here on earth. These works remind us that we are part of the body of Christ and that being a part of that community comes with both great gifts and great challenges.

In his message, Pope Francis distinguishes between different kinds of poverty—material, moral and spiritual destitution. The church urges us to consider all of these. This means that we are called not only to perform acts of charity and to work toward systemic change, but also to build relationships. Together we help our neighborhoods, cities and world to move toward greater solidarity with the poor and to create a more just world. And that is not always easy, as Pope Francis reminds us. “I distrust a charity that costs nothing and does not hurt,” he says. Being merciful sometimes means being uncomfortable.

In his message, Francis points out that the life of Jesus is an example of the kind of poverty to which we are all called. The poverty Christ chooses is not “for its own sake” but the means by which he joins us in our suffering even as he lifts us out of it. In fact, Jesus is rich in knowing his father’s love. The only true poverty, Francis says, is found in those who are “not living as children of God.” Therefore, justice for the poor cannot be accomplished through a single act, but must stem from a mentality of mercy. Our work with and on behalf of those who are poor or vulnerable is part of a continual process.

Pope Francis reminds us that “the ministers of the church must be ministers of mercy above all.” He makes it a priority, and he calls on us to do the same. The works of mercy help us move away from that last-minute mentality and toward a purposeful, prayerful approach, not only to Lent, but to the rest of our lives.

Kerry Weber, managing editor of America, is the author of Mercy in the City (Loyola Press).

@Kerry_Weberweber@americamagazine.org
Show Comments (
1
)
Comments are automatically closed two weeks after an article's initial publication. See our comments policy for more.
Timothy Saenz
8 years 10 months ago
I should have read this several weeks ago, but thank you anyway. I'll embrace the proverbial: better late than never.