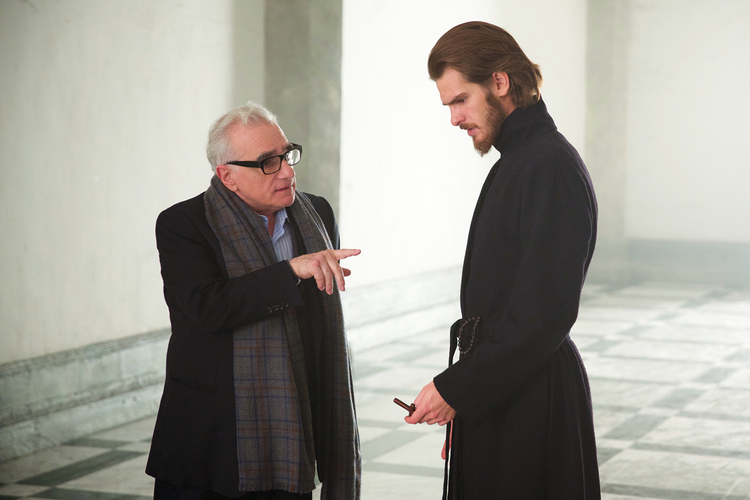 An interview with Andrew Garfield, pictured here with "Silence" director Martin Scorsese, got the most attention of America readers in 2017. (photo: Paramount Pictures).

Pope Francis’ efforts to bring a Catholic perspective to global debates about migration, racial and religious prejudice and economic inequality inspired some of the most popular stories in America magazine and at americamagazine.org in 2017. But there was an impressively wide range of other topics that got readers’ attention, including reflections on capitalism and philanthropy, a “30 Rock” writer reconnecting with the church through her wedding and evaluations of the music of U2 and Beyoncé.

Some stories had particular appeal for women; some for men. Women showed more interest in pastoral matters (like Pope Francis urging people to give to the homeless) and challenges facing the church (like outreach to millennials); men gravitated more to stories about political conflict, economics and, in one case, the evolution of high school debate rules. Younger readers were drawn to stories about popular culture and political activism, while older readers showed particular interest in liturgical matters and the statements of Pope Francis.

The most popular story of the year, as measured by the total time that all readers spent on each article (a metric that rewards not only attracting readers, but keeping them engaged), was an interview by Brendan Busse, S.J., with Andrew Garfield, star of the Martin Scorsese film “Silence,” that ran in our Jan. 23 issue. “I have been drawn to stories that are attempting to turn suffering into beauty,” Mr. Garfield said, including his role as a Jesuit priest in 17th-century Japan, a time when Christians were brutally oppressed in that country. In preparation for the film, Mr. Garfield undertook the Spiritual Exercises of St. Ignatius Loyola under the guidance of America’s editor at large James Martin, S.J.

Father Martin wrote the second most popular story of the year, an online post commenting on the viral video of a doctor being dragged off an airplane after refusing to give up the seat he had paid for. The incident “helps to reveal how corporate America often puts rules before people and how capitalism often places profits before human dignity,” wrote Father Martin.

To give an idea of the variety of content in America—and the difficulty of predicting exactly what readers will take to—we have calculated the top story for each month from each of our three major sections: Arts & Culture, Faith and Politics & Society (see below). Sometimes readers gravitated toward a Catholic take on current events, like “Five Things Hollywood Could Learn From the Catholic Church,” by Jim McDermott, S.J., after allegations of sexual assaults by Harvey Weinstein and others were brought out into the open, or Michael Redinger’s essay on the tragic case of 15-month-old Charlie Gard, who died after being taken off life support in Britain. Other popular posts seemed to come out of left field, like Haley Stewart’s review of a TV series putting a darker spin on the classic children’s story Anne of Green Gables or Colleen Dulle’s history of the love-it-or-hate-it hymn “Here I Am, Lord.”

We have also calculated our most-viewed news stories, which include original reporting by our Vatican correspondent Gerard O’Connell and our national correspondent Michael O’Loughlin. These included Mr. O’Connell’s interview with the Vatican’s top legal expert, who affirmed that Pope Francis was making it possible for Catholics in nonlegitimate unions, including civil remarriage after divorce, to receive the Eucharist under certain conditions. Mr. O’Loughlin made news in the secular press by debunking the rumor that Supreme Court Justice Neil Gorsuch had started a “fascism forever” club at his Jesuit high school and confirming that Sean Spicer, the former White House press secretary, had finally met Pope Francis, after being excluded from a Vatican trip while he was in the employ of President Trump.

On social media, politics got the most interest. Our most shared and most commented-upon stories on Facebook and Twitter tended to involve President Trump, as when he announced he was ending the DACA program that protects undocumented migrants brought to the United States as children or when Archbishop Charles Chaput of Philadelphia accused the press of being too harsh on the new chief executive.

Other popular stories involved the former Trump advisor Steve Bannon—a Catholic who has clashed with the church on immigration policy and who has credited St. Ignatius for his abstention from alcohol. The most retweets, however, went to “White supremacy is the opposite of Jesus’ message,” posted by James Martin, S.J., in response to a violent far-right rally in Charlottesville, Va., in August.

America Media’s growing film division received considerable attention in 2017, with documentaries about the largest Catholic parish in the United States (in Charlotte, N.C.) and the Catholic Church in China among our most-watched YouTube videos. Our most-shared videos on Facebook were both filmed in Louisiana. One told the story of a priest who converted an old ambulance into a mobile confessional, and another followed a eucharistic boat procession in Cajun country.

Some stories from prior years continued to do well. Some dealt with natural disasters (a hurricane prayer) and intractable social problems (like gun violence), but a continuing favorite was America’s landmark interview with Pope Francis in September 2013, shortly after he began his papacy.

There were also some stories that did not make our lists because of the Nov. 30 cut-off required by our production schedule, but late-rising stars included Eloise Blondiau’s review of the popular film “Lady Bird,” an essay by the actress Patricia Heaton on the abortions of Down syndrome babies in Iceland and Nichole M. Flores’s cover story on Dec. 11 about the legacy of Our Lady of Guadalupe.

Whether their popularity this month offers any clues as to what will be popular in 2018, we dare not speculate, but we will surely keep counting.

The top story from each of our three major sections (Arts & Culture, Faith and Politics & Society). as measured by the total time that all readers spent on each article.

Andrew Garfield played a Jesuit in “Silence,” but he didn't expect to fall in love with Jesus, Brendan Busse, Jan. 23 issue

On migrants and refugees: “I was a stranger and you did not welcome me,” James Martin, S.J., Jan. 27

On Donald Trump: This is not what pro-life leadership looks like, Sam Sawyer, S.J., Jan. 23

A priest and his mom watched the movie “The Shack,” Eric Sundrup, S.J., March 2

Pope Francis says give to the homeless, don't worry about how they spend it, Michael O’Loughlin, Feb. 28

What can Beyoncé and Pope Francis teach us about love?, Olga Segura, May 15 issue

The United Airlines debacle is about the morality of capitalism, James Martin, S.J., April 11

The case for dragging your bored teens (and tired self) to Mass, Karen Park, May 18

Callista Gingrich picked as U.S. ambassador to the Vatican, Michael O’Loughlin, May 15

The book Christians should read instead of The Benedict Option, Jason Blakely, June 14

The case against philanthropy as we know it, Nathan Schneider, June 26 issue

What some pro-lifers have overlooked in the case of Charlie Gard, Michael Redinger, July 5

How the Jesuits at America responded when Hugh Hefner sent them Playboy, James Keane, Sept. 28

Day of the Dead is not “Mexican Halloween,” Gina Franco and Christopher Poore, Nov. 27 issue

A Thanksgiving prayer for nearly everyone, James Martin, S.J., Nov. 22

Margaret Sanger was a eugenicist. Why are we still celebrating her?, John J. Conley, Nov. 27

Note: Data cover the period from Jan. 1 to Nov. 30, 2017. Only stories original to America Media are counted; each story is counted for the month of its highest readership only. Monthly data is based on estimates of total time spent viewing each story by online readers. Some content is posted on the America Media website before it appears in print.

1. Pope Francis says give to the homeless, don't worry about how they spend it, Michael O’Loughlin, Feb. 28

3. No, Neil Gorsuch did not start a “Fascism Forever” club at his Jesuit high school, O’Loughlin, Feb. 2

The most-viewed stories in 2017 from prior years.

1. The largest Catholic parish in America: St. Matthew in Charlotte, N.C. (Related story: "Lessons on evangelization from the largest parish in the United States," Leah Libresco, May 1 issue)

2. Fr. James Martin: What does the Bible say about refugees, migrants and foreigners?

3. Catholic Sisters at the Women’s March on Washington on Jan. 21

5. Fr. James Martin on Charlottesville: “White supremacy is the opposite of Jesus’s message.”

18-24: Andrew Garfield played a Jesuit in “Silence,” but he didn't expect to fall in love with Jesus, Brendan Busse, Jan. 23 issue

Stories read by twice as many women as men

Pope Francis says give to the homeless, don't worry about how they spend it, Michael O’Loughlin, Feb. 28

“Here I Am, Lord”: The little-known story behind a Catholic hit, Colleen Dulle, Oct. 12

Stories read by twice as many men as women

Most retweeted from @AmericaMag

.@JamesMartinSJ: White Supremacy is the opposite of Jesus' message. pic.twitter.com/nMu4wk4FIr

No, Neil Gorsuch did not start a ‘Fascism Forever’ club at his Jesuit high school https://t.co/wubQEOjXuz

1. America video: “Meet the priest who bought an ambulance on eBay and converted it into a mobile confessional.” (Aug. 29)

2. America video: “Louisiana’s Cajun Catholics celebrate the Feast of the Assumption with a one-of-a-kind Eucharistic boat procession on the bayou.” (Aug. 23)

3. Pope Francis says give to the homeless, don't worry about how they spend it, Michael O’Loughlin (Feb. 28)

5. How the top-heavy Catholic Church is losing the ground game in China, Ian Johnson, Sept 18 issue

2. How Cajun country, an old ambulance and 1,200 frog legs led me back to the confessional, Sonja Livingston, Aug. 23

3. Philly archbishop says the press is being too hard on President Trump, Michael O’Loughlin, Feb. 13