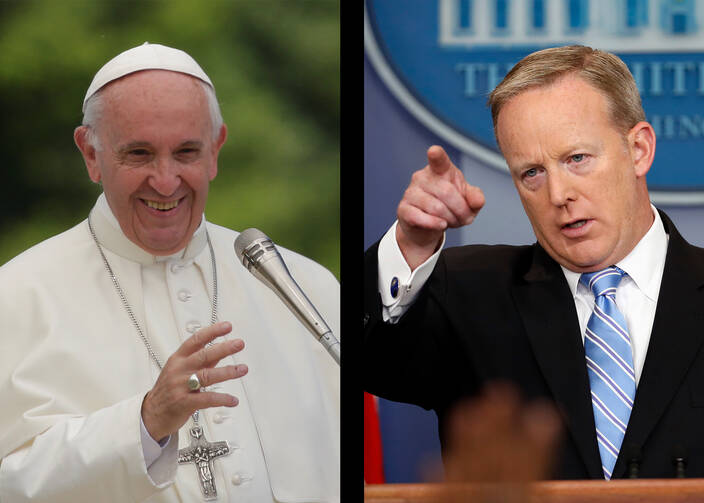 A group of legislators and politicians from around the world gathered in Italy this week for a meeting of the International Catholic Legislators Network, where they were received by Pope Francis at the Vatican. Among those gathered was Sean Spicer, the former White House press secretary who was by some accounts snubbed by President Trump in May.

Mr. Spicer, a Catholic, had expressed a desire to meet Pope Francis, but he was left off the list of U.S. officials who accompanied the president to the Vatican. This perceived slight prompted sympathetic comments from some of the journalists Mr. Spicer sparred with as press secretary:

This seems needlessly harsh - when else is Spicer likely to meet the Pope, and it mattered to him? https://t.co/jUtcTW8wbg

Mr. Spicer resigned as press secretary on July 21 but stayed on at the White House.

A photo posted to the Vatican Radio Facebook page shows Mr. Spicer using his cell phone to snap a photo of Pope Francis, who in an address to the group urged cooperation and bridge-building.

Representatives from the I.C.L.N. did not return emails or calls to America but a Vatican official confirmed that Mr. Spicer attended the gathering.

According to Vatican Radio, Pope Francis told the group on Aug. 27 that the church can be a valuable resource for addressing the moral dimensions of societal challenges.

“As long as the contribution of the church to the great questions of society in our time can be put into discussion, it is vital that your commitment be constantly pervaded by her moral and social teachings, in order to build a more humane and just society,” Pope Francis said.

The pope repeated his refrain that political leaders should seek to build bridges rather than walls.

“The laws that you promulgate and apply ought to build bridges between different political perspectives: even when they respond to precise ends ordered to the promotion of greater care for the defenseless and the marginalized, especially the many who are constrained to leave their countries; and when they are in order to favor a correct human and natural ecology,” he said.

U.S. Representative Alex Mooney, a Republican from West Virginia, told Vatican media that he was inspired by the gathering.

“We have an opportunity to meet here with other Catholic legislators and elected officials from other parts of the world and to discuss common concerns—problems, opportunities—for our faith and how to work together and support each other,” he said.

Cardinal Christoph Schönborn sponsored the founding of the International Catholic Legislators Network in 2010. According to its website, its goal is to “to discuss the promotion of Christian principles in the political arena.” 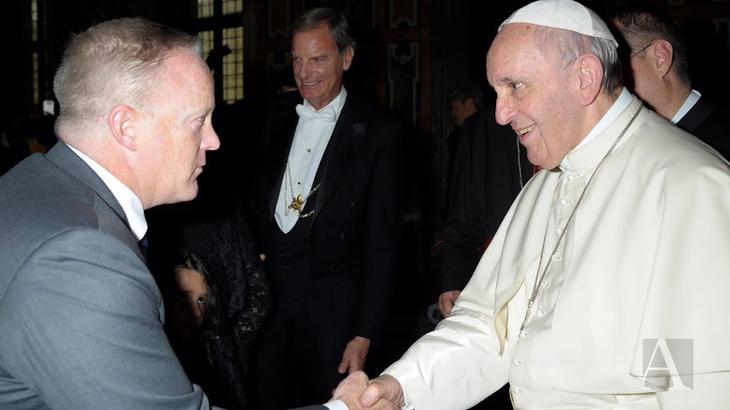 Spicer is trying to get his soul back, and thinks the Pope can help? Isn't it a little too late for that? I actually feel sorry for Sean Spicer, he had a job that was literally impossible to do correctly.

Somehow, the non-inviting of Mr. Spicer to meet the Pope when the President visited the Vatican struck a nerve with me. I genuinely feel as though a wrong has been righted even though the act of the President was of no major consequence to anyone. This article thus cheers me; I thank this magazine for that.

You expressed my sentiment precisely ! It "struck a nerve" with me as well. I'll leave it at that - charitably written Mitchell! I'm glad Mr. Spicer got what mattered so much to him- something which, in itself, is a credit to his Catholic identity that it mattered to him as much as it did.

I am no Spicey fan, but this makes me happy.

Hopefully this contributed to Sean Spicer's individual journey of faith.

Not to be too mean spirited but the Pope meets with many many people who claim to be Catholic but are engaged in actions that directly injure the Church and injure people of faith. Mr Spicer's actions are directly opposed to many Biblical teachings and many traditions that have been handed down to us by the Church. His bold declarations of obvious falsehoods stands out. His support of people who tolerate radicals stands out.

Hopefully he reforms his life (as we all should) and sins no more.

I am happy for Sean Spicer. Regardless of his attempt to represent a dishonest and manipulative administration, I am glad that he had a chance to meet Pope Francis. Leaving him out of the delegation to the Vatican in May was simply egregious cruelty on Trump's part.

Happy for Sean Spicer.
It has been a rollercoaster of a year for him. Defending an unstable man while, at the same time, having his feet put to the fire by the corrupt, vengeful, Deep State media must be living Hell.