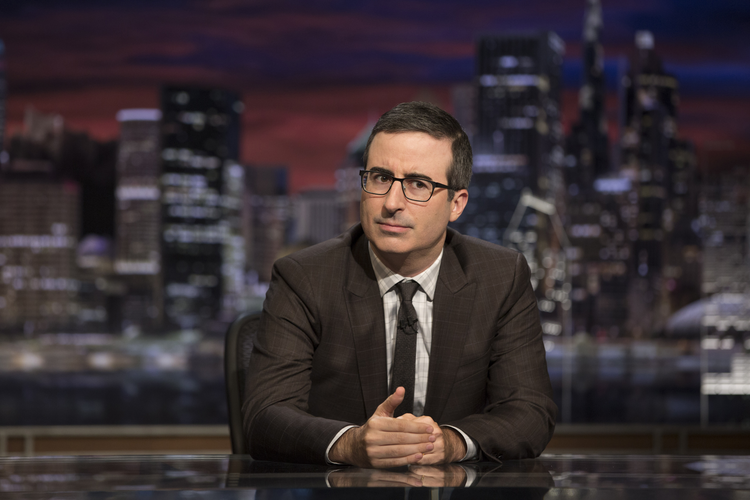 This article is part of our Point/Counter-Point series. For a contrasting perspective check out John Oliver: Comic Crusader Against the Status Quo

Donald J. Trump ran for president because of a comedy bit. We can never be sure, of course, but go back and watch President Obama take aim at him at the 2011 White House Correspondents Dinner.

At the time, our current president was in the middle of his birtherism crusade, and our former president had released his Hawaiian birth certificate, hoping to put an end to the issue. Obama didn’t hold back—mocking Trump’s belief in conspiracy theories, his reality television show, his political aspirations. “Say what you will about Mr. Trump, he certainly would bring some change to the White House," Obama said, in a tone that is now chilling to listen to. Adam Gopnik recalled Trump’s reaction:

Trump’s humiliation was as absolute, and as visible, as any I have ever seen: his headset in place, like a man in a pillory, he barely moved or altered his expression as wave after wave of laughter struck him.... If he had not just embarked on so ugly an exercise in pure racism, one might almost have felt sorry for him.

This is not to fault Obama—he was performing at what is essentially a roast. Still, we would be remiss not to remember a lesson in evidence that night and at many points in the 20th century: that shame is a base ingredient in the cocktail of populism and fascism. If President Trump is not a fascist, he is undoubtedly a populist and poses a unique threat to our core democratic institutions.

And that is exactly why liberals should stop watching John Oliver.

“Last Week Tonight With John Oliver” returned to HBO on Sunday, with its satirical sights set on a presidency that considers comedians and journalists alike to be political adversaries. President Trump is clearly bothered by depictions of his on “Saturday Night Live,” as evidenced by the president’s Sunday morning tweets.

.@NBCNews is bad but Saturday Night Live is the worst of NBC. Not funny, cast is terrible, always a complete hit job. Really bad television!

In a time of fake news and alternative facts, Oliver and his team will surely be tempted to double-down on their investigative-journalism, fact-driven brand of a comedy show. But it will be terrible for our public discourse.

Oliver continues in the tradition of Jon Stewart, adding reinforcements to the “liberal” bubble. He coddles his viewers by convincing them (as if they needed more convincing) of how right they are, how wrong they are, how many more facts they know than them. The visual assault of fact after fact without any time given to admit the weak points in his argument robs his viewers of the opportunity to think, or have any deep understanding of an issue. Worse, the false sense of solidarity that comes with sharing an Oliver segment on Facebook is an invitation to apathy not resistance.

True, Oliver has had wild success—even in influencing policy. It’s likely that the legion of comments Oliver sent to the FCC killed a proposal threatening net neutrality. But, then, he just couldn’t make Donald Drumpf again, no matter how many clickbait headlines claimed the comic destroyed/eviscerated/ended Trump’s presidential prospects.

Churches and Taxes: What John Oliver got wrong (and right)
Lloyd Hitoshi Mayer

Those who supported Trump voted for him for a variety of reasons. But a common explanation is the way that large swaths of the country, and their way of life and thinking, were constantly overlooked and looked down upon by those in Washington, Hollywood and their liberal relatives on Facebook. But many supported him reluctantly—and one way to turn a reluctant Trump voter into a President Trump apologist is to share a 20-minute takedown of an opinion they hold by a falsely self-deprecating Brit. “Keep reminding yourself: This is not normal,” Oliver told his audience after the election. “Because a Klan-backed, misogynist Internet troll is going to be delivering the next State of the Union address—and that is not normal.” The same shame that might have pushed Trump to run will be the shame that pushes his supporters to defend indefensible policies.

Some will say, as Jon Stewart often would, that Oliver is only a comedian. He is not a journalist or politician. But journalists, politicians and comedians alike would do well to learn that they not only reflect society and its discourse—they shape it.

This article is part of our Point/Counter-Point series. For a contrasting perspective check out John Oliver: Comic Crusader Against the Status Quo

Zac Davis - Thank you for an entertaining article, but I'll continue watching John Oliver and use my intellect to separate fact, fiction, humor, alt-fact and whatever challenges are involved in forming personal opinion. Interesting final sentence - you also influence society and discourse. Let everyone speak. Let everyone think. Let everyone vote.

I hardly watch TV at all - almost all I see of TV is in the break room at work. I have never watched John Oliver, so I cannot comment on his show. I have watched the SNL episodes on politics lately. They give me hope because they are the voice of the resistance. Yes, they mock Trump and his staff, but they also speak the truth about a bunch of liars. Sometimes humor is the only thing that makes this horror of a presidency tolerable.

If I have this right, the author is saying that for someone to present an argument is to, quite literally, "rob" the audience of both sides of an issue - that their is some inherent dishonesty (and thus fallacy?) in building a case, disputing claims, and arguing a position. However, not only is this not sound logic, and not only does the very suggestion of such a notion disprove itself, but the author also seems to not understand the context in which Oliver's critiques/exposes/opinions are given. In most cases, John Oliver (and his team) are, themselves, the counterpoint of an argument - not its vanguard. That is, Oliver isn't standing up to say, "Here is a novel idea: Trump is bad." Instead, as the nation is being inundated by pro-Trump, pro-conservative politics, Oliver is, instead, getting up to say, "Pump the brakes, here are some facts." It appears the author does not understand this as most of the argument seems to be hinged upon the suggestion that Oliver is pushing an agenda. Certainly, Oliver represents left-wing thinking, but his show is not its womb. It seems, then, that the author does not understand the context of that which he is trying to critique. Additionally, mentioning Oliver's heritage is at best a suspicious and very transparent method of diminishing his viewpoint (as if a British person couldn't give opinions on America?). Additionally, if the argument is that left-wing proponents like Oliver must tread carefully because their viewpoints "shape society and its discourse," doesn't that necessarily dismiss the idea that Oliver would shame (and thus incite) the right-wing? Anyways I could keep going becuase this is written like absolute garbage and I've clearly given this article more thought than you did, but I'm gonna spare myself. Long story short: Mr. Davis you're supposed to be fucking editor, not some clown trying to bullshit his way through a devils advocate paper in college.

Mr. Callaghan, thank you. Any resistance, deadly serious, satirical or somewhere in between is necessary during this mad, dangerous time.

You merely reminded us while Hillary lost....bigly