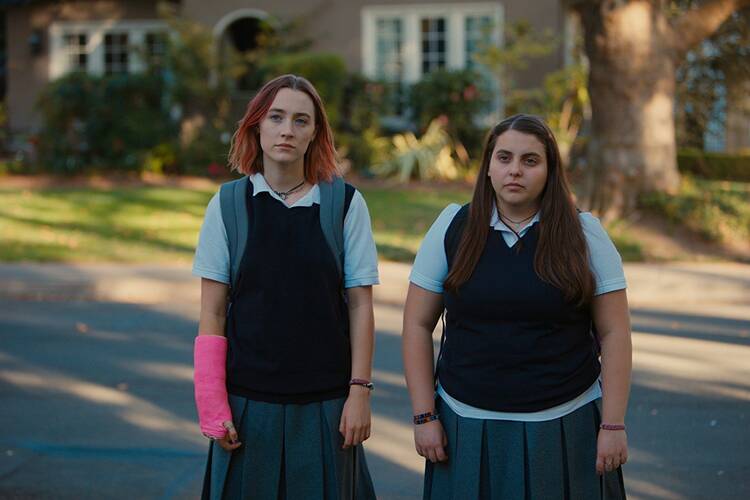 Saoirse Ronan and Beanie Feldstein in "Lady Bird" (image via A24)

“I felt like I could shoot Sacramento in a way that no one else could,” Ms. Gerwig, who wrote and directed the film, told me. “I wanted to make a movie about home and what home means.... Although the movie is not literally autobiographical, the events are not what happened, there is a core of truth that is inherent.”

Ms. Gerwig’s choice to pinpoint a particular place and exact year (2002) has an intended consequence for her audience. “The more particular you make something, the more universal it becomes,” she said. The film has a long roster of devastatingly specific characters and relationships. One of the goals of the film, she says, was to challenge the minds of high schoolers, who often deal in stereotypes.

In “Lady Bird,” I also saw, for the first time in film, a Catholic girls’ school as I remember it—brimming with kindness, weirdness, friendship and rebellion.

“Teenagers, in particular, see people as just in relation to them[selves], like that is [just] my teacher, or that is a priest, or that is a principal, or that is a parent…. That’s never the case. Everybody is always in the middle of their own opera,” Ms. Gerwig explained.

It was striking to be presented with so many complicated, operatic characters in “Lady Bird,” and it was refreshing to see religious characters presented in three-dimensions. The priests and nuns in the film are people with their own interests and pain, rather than the cardboard cut-outs we sometimes see in film.

In “Lady Bird,” I saw for the first time in film a Catholic girls’ school as I remember it—brimming with kindness, weirdness, friendship and rebellion. Of course it was normal to audition for the school play with a hymn like “Make Me a Channel of Your Peace.” Of course the wealthiest girl in the class had tailored the hem of her skirt to make it permanently shorter, rather than rolling it up like the rest of us. Of course the school was nicknamed Immaculate Fart. (My Catholic girls’ school, St. Augustine’s, was known as St. Disgustings.)

Although this is a film saturated in Catholic imagery and language, Ms. Gerwig is not Catholic and never has been. She did, however, attend Catholic school and wanted to make a film that reflected her joyful experience there.

“There’s plenty of stuff to make a joke out of [in Catholic schools], but what if you didn’t? What if you took it seriously and showed all the things that were beautiful about it?” she asked.

Ms. Gerwig told me that in addition to her theological education, at school she encountered “for lack of a better word, a lot of groovy priests and nuns who were very funny and engaged and open and really truly saw their students.”

The boys’ school down the road from Ms. Gerwig in Sacramento was run by Jesuits, and some Jesuit influences have seeped into “Lady Bird.” When the students from the girls’ and boys’ schools come together for a theater production, they chant “St. Ignatius of Loyola, pray for us!” and the priests double as football coaches and drama teachers. “What [the Jesuits] were trying to teach us, I think, and the nuns as well,” Ms. Gerwig said, “is that there are all kinds of ways of serving God.

Grace, for Ms. Gerwig, is “wholly unearned. In some ways it's inexplicable. It's beyond exactly forgiveness, but it's some acceptance.”

She added: “I think it was echoed later when I read [Father] James Martin’s account of Ignatius, who was ambitious, and then he became ambitious but in service of this other thing. This idea that whatever you’ve got, God can use.”

When she was writing “Lady Bird,” Ms. Gerwig thought a lot about what saints were like as teenagers, when they were perhaps just troublemakers without a worthy cause. “I was so interested in...taking something that just looks like...an annoying teenage girl and then giving her the experience of what I think of as grace,” she said. Grace, for Ms. Gerwig, is “wholly unearned. In some ways it’s inexplicable.”

The anxiety and excitement that come with recognizing your potential is an overriding theme for all of Ms. Gerwig’s characters. “What if this is the best version [of myself]?” Lady Bird asks her mother (Laurie Metcalf) in a Goodwill changing room. Her mother shoots back a pleading eyebrow-raise, as if to say: “Oh God. It has to get better than this.”

Midway through the film, Lady Bird reviews her college application with Sister Sarah-Joan (Lois Smith) at her Catholic high school. When the sister remarks on Lady Bird’s affectionate writing about Sacramento, Lady Bird shrugs off the compliment, saying she just pays attention. “Don’t you think that might be the same thing?” asks Sister Sarah-Joan. “Love and attention?”

If Sister Sarah-Joan is right, “Lady Bird” is a film with an expansive heart, since Ms. Gerwig’s attention is wide-ranging and meticulous. “Lady Bird” is as much a love letter to Sacramento as it is to disappointed, hard-working mothers; to defiant daughters; to depressed and doting fathers; to open-hearted nuns; to struggling priests; to scared, closeted high schoolers; to the childhood friends who help you to grow into yourself—whoever that is.

"Trouble with Angels" is a love letter to a Catholic School and
to the good Sisters who taught there.

Not to mention it had Hayley Mills - whom I would still gladly marry.

That made me smile:). Anxious to see this movie - the Wall Street Journal gave it a glowing review as well.