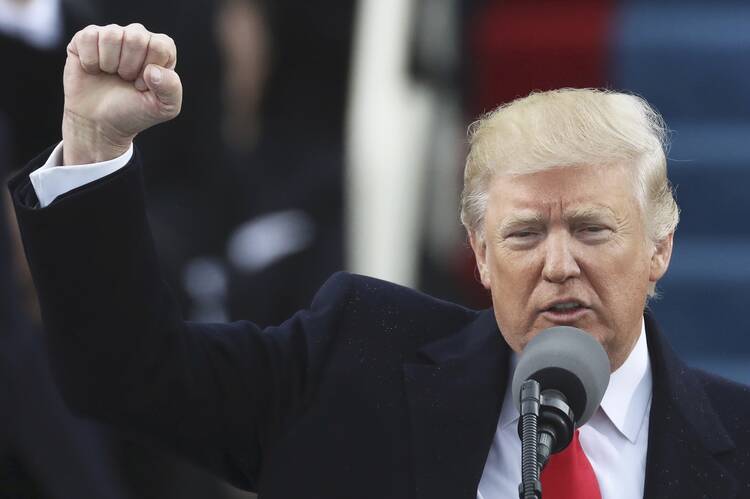 During his brief inaugural address, President Donald J. Trump called for a new patriotism to “lift our sights and heal our divisions.” In the wake of the most divisive presidential campaign of the modern era, this sentiment was welcome. But the new president also demonstrated why he is an imperfect messenger. Using strident language reminiscent of his combative campaign rhetoric, Mr. Trump described an America characterized by widespread crime and poverty, decaying infrastructure, shuttered factories and failing public schools.

It was a simplistic, almost apocalyptic portrait, one that contains elements of truth but belies the realities of low unemployment, booming markets and falling crime rates. Yet in describing this “American carnage” in the way that he did, Mr. Trump set himself up to point the blame and name his enemy: the political and economic “establishment” that has “protected itself but not the citizens of our country.”

Far from an instrument of healing, the president’s address amounted to a declaration of war on globalization and the elites who reap most of its rewards. Mr. Trump’s first line of attack is old-fashioned nationalism: “It’s going to be America first,” he said, promising “the forgotten men and women of our country” that “every decision” he makes “will benefit American workers and American families.”

This promise echoes the isolationist “America First” rhetoric of the 1930s and 1940s. It is facile and misleading at best. The politics of policy-making, especially in a highly polarized environment, is often a zero-sum game in which some people benefit and some do not. At worst “America First” is a serious threat to the international solidarity that lasting peace and justice require. Our brothers and sisters live not only within our borders but across the world.

Nationalism is not a new force in American politics. From the start, the national narrative has included an element of American exceptionalism, the belief that the United States has a vital, unique role to play in world history. Yet that mythic hubris takes the form of a false messianism in Mr. Trump’s vision. “At the bedrock of our politics,” he said, “will be a total allegiance to the United States of America, and through our loyalty to our country, we will rediscover our loyalty to each other.”

Patriotic Christians of every political persuasion should see this blind nationalism for the idolatry it is. Students of 20th-century history should see it for the clear danger it is, especially for those whom nationalism inevitably leaves behind. “Greatness for our nation,” Bishop Robert McElroy writes in the upcoming Feb. 6 issue of America, is not an idol, “a possession or power but an ever-challenging aspiration of the heart and soul.”

The ultimate instrument of our unity is the patient grace of God, not the greatness of the nation state. We render unto Caesar what is Caesar’s, but it is in God we trust.

The comments function seems to be problematic at present. No paragraph breaks in previous comments.

No way to edit comments either. Always handy since I make numerous typos in comments.

I guess I am the odd person out. I am deeply afraid for what is happening in our country and what will happen under this President. Business and government are not the same, and one does not lead in the same way. That Trump thinks he can come in with "first offers" and then come back for more on international discussions, is deeply troubling. The results of his first two calls, to Australia's PM and the President of Mexico were a disaster. Diplomacy is a complex career field, with its norms of behavior and speech. Shouting at others, making threats that were later called "jokes", and the things he throws out in conversations show a man who has no knowledge of what he is doing. And that is fine. I have had the word "winging it" in my mind ever since he started. He IS winging it, and just like a juggler, eventually something drops. A single intemperate word during the Cold War with the USSR could have meant war. It risk level hasn't changed.

We still don't know all that much about Trump, including the basis for his apparent obsequiousness toward Vladimir Putin, that indicates that Trump sees himself as being buddy buddy with this man. Contrary to Trump's statement to Bill O'Reilly, Putin, who IS a murderer, in the sense of ordering the death of a specific person he doesn't like, and his state security people will make it happen, does Donald Trump actually think ANY United States President has EVER done the same? We have gone after the heads of military organizations frequently as part of armed conflict, including after bin Laden and other ISIL leaders, but never a journalist or someone who is just an annoyance. President Trump needs to explain more than he has. He needs to come clean, including his business deals. He has so far just blown it off like no other recent candidate or President has done. What will he do about releasing his taxes next year?

President Trump has said repeatedly that NATO is obsolete. If he acts on that idea and pulls us out of NATO, it will be exactly what Putin wants: A free hand into Western Europe. I spent two years in the 1980s working on logistics requirements for that war, where the Soviet Union came through the Fulda Gap into Germany. I hope EUCOM (European Command) has dusted off those plans, because the risk is not over. Our troops flooding into Poland, into the Baltic Nations, etc. are the biggest obstruction Putin has. I never thought I'd see US troops invited into a Warsaw Pact country (Poland and the Baltics) in my life. Putin wants the Warsaw Pact nations back in his control. They don't want to go there.

I have been a military intelligence officer at the highest levels of our government for four years, and I am deeply afraid of what I see. A man who does not know how to use the methods of government agencies, and doesn't want to learn, because he apparently reads only reluctantly, (I suggest finding the clip of Donald Trump being deposed in NY. It is painful to watch as he acknowledges he has not read stuff he signs; that he relies on his people to tell him what it is about, and that he perhaps CAN'T find the place in the deposition they want to call hise attention to...) Instead he is relying on two people to get Executive Orders developed, and both those men have serious issues that demand crosschecks and limits on their views. And that isn't happening. There is a limit to what one can do by Executive Orders, and then where will we be? What will President Trump do then? There are 500 empty chairs demanding bodies, and all these people have to be approved by the Senate. Most have not been named, and those who have have not complied with the procedures required when hiring in at this level. No business would tolerate that, why should our Government?

Meanwhile, in our society, refugees are being demonized, and one group is being pitted against another. Trump has put himself forward as "I am the only man who can fix this" Although he never said it in those terms, this applies to another man I've learned about: His name was Jesus. Pretty lofty claims. Things are being asserted today that are disowned tomorrow. Trump throws out "facts" that are simply whatever supports his argument. They are not true, and are not even remembered by him the next day. How can a nation function like this? Whole categories of information on government web sites are being taken down, without explanation. The climate scientists who quickly made copies of as much as they could were prescient. We are losing our national memory and knowledge. This is scary.

Scary is the only feeling I have today. And mourning. A man who worked incredibly hard for us has finished his term and is no longer our President. A woman who, despite all her flaws as a CANDIDATE, would have been a knowledgeable President, focused on families and kids and those in need. And she's not here either. Instead, we have a man who is operating like a loose cannon. He seems out of place, wandering around the WH residence at night, all alone some of the time...and his frustration levels are rising daily.

All I know how to do is to pray, and to work harder than ever for the poor in our community. And hope. Four years is something I hope we can overcome.

Pope Francis is about to visit Greece and Cyprus — and he’s expected to bring 50 migrants back with him
The pope sees his visit here as another way to get people in Europe and elsewhere to understand that the greatest humanitarian crisis since World War II requires a global solution.
Gerard O’ConnellDecember 01, 2021